You better watch out for this Père Noël 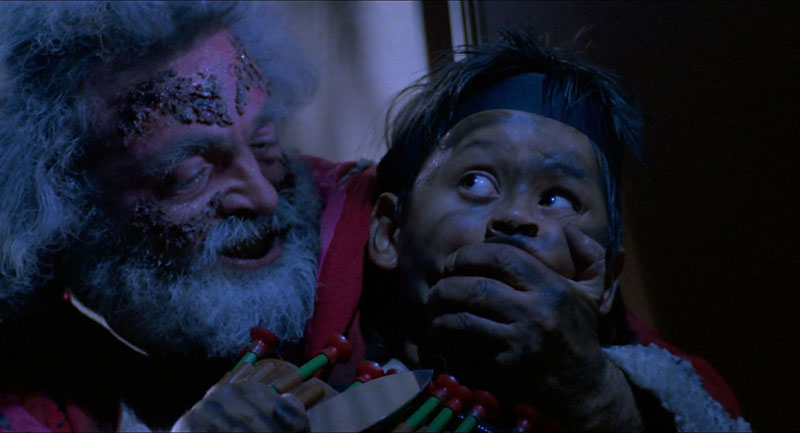 It's 1990, and Kevin McCallister isn't the only kid left home alone. While the Wet Bandits were taking paint cans to the face in Chicago, across the Atlantic, just outside of Paris, Thomas (Alain Lalanne) was coming face-to-face with Santa – only this Father Christmas is a crazy homeless man (Patrick Floersheim) who has taken it upon himself to deal with the naughty list in a hands-on way. Unfortunately for fake Santa, Thomas is the son of a millionaire and a Rambo fanatic, able to turn everything in his bottomless toy chest into a weapon. Unfortunately for Thomas, this Père Nöel is as unstoppable as Jason Voorhees.

That's the insane plot of seasonal weirdness Dial Code Santa Claus. Originally released in 1990 as 36.15 Code Père Noël, the French action-thriller has as many international pseudonyms as Jolly Old Saint Nick himself, even playing at Fantastic Fest last year as Deadly Games. Now, 28 Christmases after it was first unwrapped, it finally arrives in U.S. cinemas, courtesy of Austin-based film revivalists the American Genre Film Archive. Writer/director René Manzor called it "a duel between childhood and madness," a rare example of a French action film that has found an international audience.

Manzor grew up watching crowd-pleasers by directors like Julien Duvivier (Pépé le Moko), George Franju (Eyes Without a Face), Jean-Pierre Melville (Le Samouraï), and Henri-Georges Clouzot (Diabolique). "They had nothing to do with arthouse movies," he said. "They were entertaining and deep. But then came the French New Wave and their 'cinema verité.' For these directors and for the French intelligentsia, movies had to resemble life. Well, I didn't feel comfortable with that school of thought at the time and still don't today. For me, directing is bending reality to make it fit the director's imagination."

Dial Code Santa Claus definitely bends reality, and when released in 1990, it became a hit across Asia and Europe – except in France. "French genre movies were ostracized by the distributors and the press," Manzor said, and his film only scraped a single week in theatres. However, he got the last laugh when it was finally released on video, topping the sales and rental charts for six months.

But even though the film didn't get a U.S. release at the time, it put Manzor on the international radar. One fan? Superproducer Kathleen Kennedy, who introduced him to Steven Spielberg (who told Manzor that he watched Dial Code three times with his son Max) and George Lucas. The duo was looking for directors to work on their new series, The Young Indiana Jones Chronicles. The show placed the two-fisted archaeologist from Raiders of the Lost Ark in real historical settings, and Manzor ended up directing two episodes ("Verdun, September 1916," and "Paris, September 1908") alongside a who's who of international directors, including Bille August (Pelle the Conqueror), Nicholas Roeg (Don't Look Now), Terry Jones (Monty Python and the Holy Grail), and Joe Johnston (Captain America: The First Avenger). "I was the youngest," said Manzor. "My nickname was 'the kid' on this show. But, knowing that Spielberg and Lucas were looking at my dailies, I was doing my extra best creatively."

This U.S. release is also a tribute of sorts to Floersheim, who died in 2016. "Sadly," said Manzor, "he passed away before knowing the film was about to be released in his homeland." Finally, U.S. audiences get to see his wild but sensitive performance, which Manzor called "the keystone of the film. ... We didn't want him to be Mr. Bad. He is a child in a grownup's body. He just wants to play, and just like a kid, he has no limits."

A version of this article appeared in print on December 21, 2018 with the headline: You Better Watch Out!