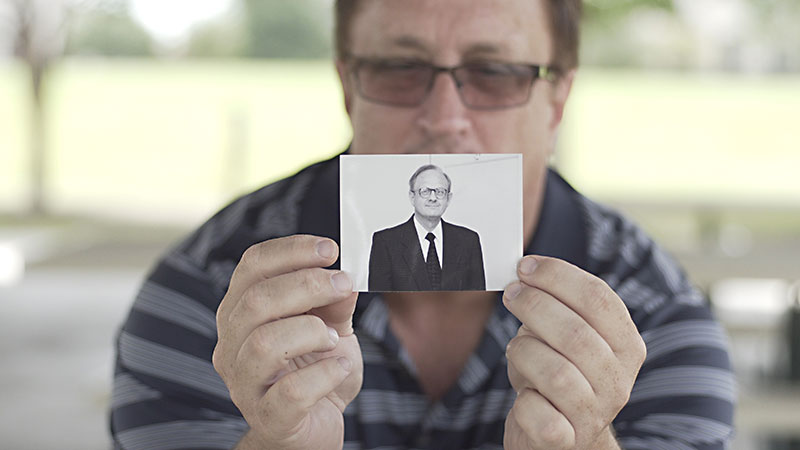 On a hot June day in 2014, the Reverend Charles Moore paced around a strip mall parking lot in East Texas for hours before dousing himself in gasoline, striking a match, and setting himself on fire. Moore's suicide made national headlines and put the small town of Grand Saline on the map – and under a microscope. About 250 miles away, Joel Fendelman was enrolled in the Radio-Television-Film program at the University of Texas. It was here, in Austin, that a mutual friend introduced the filmmaker to James Chase Sanchez, a Grand Saline native who told Fendelman the heartbreaking tale of the small-town minister who set himself on fire. The two students quickly agreed that Moore's story might make for a great film. That film became Man on Fire, a one-hour documentary that served as Fendelman's thesis at UT and will premiere on December 17 as part of PBS' Independent Lens series.

Over the course of several months in 2016, Fendelman made seven trips to Grand Saline, where he spoke with several of the town's residents – many of whom are featured in Man on Fire. As a Jewish man who was born in Miami and spent much of his life in New York City, Fendelman had acclimated quickly to the "bubble" of Austin. "But," he said, "once you go about an hour outside the city toward East Texas, it's a whole other world."

It's the world where Moore was born, and to which he returned following his retirement from the Methodist church. The wheels spin a little bit slower in Grand Saline, and Moore struggled with his hometown's archaic views on race and equality. That experience left an indelible mark on his psyche and inspired his mission to serve those in need. Wherever the ministry took him over the course of his 75-year career, Moore opened his doors – and his heart – to members of the black and LGBTQ communities (the latter despite the Methodist church's firm stance against homosexuality).

Moore "really had his skin in the game with social justice," said Fendelman, who was taken by his subject's commitment to walking the walk – and how those altruistic beliefs convinced the good reverend that martyrdom was the only way to inspire real change. In Moore's mind, he was making a statement more powerful than any sermon; but did his death accomplish what he intended, or did he die in vain? "I don't know if I can say that it's had a measurable impact," said Fendelman. "I can say that it's impacted people." Although the filmmaker says "the general response from the folks in Grand Saline has been, 'He must've been crazy,'" there are a few residents that were moved by Moore's motives – and those people, Fendelman explained, would agree that there is (or was) "something wrong" with Grand Saline.

That "something" isn't much different from the issues that remain prevalent throughout the rest of the United States. In many ways, Fendelman said, Grand Saline is a "microcosm of our country." Asked what he hopes viewers will take away from Man on Fire, he referred to a line spoken by theologian and activist Jeff Hood: "Grand Saline wants to move past this, but what they need to do is sit with it." Fendelman said he believes this bit of wisdom could apply to most of America, which hasn't "really dealt with the atrocities" of the past, including its history of slavery. "By moving past it, we're not dealing with it," he said. "What we really need to do is deal with it."

A version of this article appeared in print on December 14, 2018 with the headline: Burning for Our Sins