It may be called Ralph Breaks the Internet, but Vanellope von Schweetz is the real star of Walt Disney Animation's sequel to Wreck-It Ralph. The scrappy, pint-sized driver of candy-coated racecars (voiced by Sarah Silverman) no longer has reason to steal scenes from John C. Reilly's Ralph: She's the headliner, and her story is one that many viewers will find deeply relatable. It's a tale of friendship and the ways we evolve together and – sometimes, unfortunately – apart. It's about our insecurities and how they often threaten to destroy the relationships we care about the most. But it's also a story about ambition, and of following your dreams however far they may take you, even if it's far and away from your comfort zone. For screenwriter and former Austinite Pamela Ribon, those dreams took her all the way to Los Angeles, which might as well be a different planet.

That's sort of how Ralph and Vanellope feel in Ralph Breaks the Internet, which sends the pair on a wild online odyssey in search of a replacement part to repair Sugar Rush – the arcade game where Vanellope "lives." In this vibrantly colored world she calls home, Vanellope knows every racetrack and shortcut, every hairpin turn and syrupy trap. And although she's craving new challenges, Vanellope also fears who – or what – she'll become without the place that has defined her.

It wasn't long ago that Ribon found herself in a similar position, and in describing the distinct feeling of loss that Vanellope experiences, she offers a glimmer of what makes the character so relatable. "It's like someone has taken a Rubik's Cube out of your hand, and it's like, wait, I was still working on that" Ribon said. "And then you're just sort of left in this weird abyss, and it can feel like there can't be anything in front of you, but of course there is because there's time." It's only in hindsight, Ribon added, that we begin to understand that the loss was necessary to move forward.

You could easily imagine Ribon, with her similarly bright and crackling voice, as the grown-up version of Vanellope. They're both clever, empathetic, and rather ambitious: Ribon moved to Austin in 1993, where she worked in tech support for IBM and studied drama at UT by day. By night, she honed her wit on West Sixth Street, performing with the improv group Monks' Night Out. In addition to comedy, Ribon had a knack for the tech industry, and contributed to the Austin American-Statesman's "Technopolis" column. "I was Erma Bombeck with a mouse pad," she chuckled.

Like Vanellope, Ribon was best known to her fans as a digital avatar. Under the name "Pamie," Ribon wrote recaps for groundbreaking TV culture website Television Without Pity, and kept an online diary called Squishy – in the days of the "oldernet," long before anyone knew the word "blog," much less that blogging would become a legitimate profession. As Ribon described it, she essentially cut her teeth on the world of fandom and understands the online world that's built up around it. "Knowing the history of trolls," Ribon said, "and how to balance your online life and your anonymous life" helped shape the story of Ralph and Vanellope.

Ribon said she also knows "what it's like to be a true fan," which helped shape the hilariously charming sequence in which Vanellope meets the entire ensemble of Disney princesses (each delightfully voiced by their original actors). With her background in improv, pop culture, and comedy (and with a child of her own), Ribon emerged as the perfect writer to assume the myriad voices of Disney's iconic feminine heroes. The end result is a scene that strikes the perfect balance between humor and affection without veering into heavy-handed self-parody.

But something potentially life-changing happens to Vanellope on this quest. While Ralph is preoccupied remaking viral internet videos, his friend stumbles upon what might be her true calling: A gritty street-racing multiplayer online role-playing game called Slaughter Race, and its charismatic and extremely talented main character, a street-racing gang leader named Shank. Aptly voiced by Wonder Woman superstar Gal Gadot, Shank becomes Vanellope's new personal superhero, and inspires her to contemplate leaving the world of the arcade – and possibly Ralph – behind. "A lot of us took that big leap of moving out into a big city to follow a big dream," said Ribon. "And we certainly don't forget the ones that it hurts to leave behind."

Though Ribon and her co-writers consciously tried to create gender equality in the narrative, there is a distinctly feminine emotional energy – perhaps because much of the film is focused on Vanellope's journey. Ribon said, "I'm wondering if it feels feminine because we're talking about friendship in a way that women talk about their friends, their best friends, the sisterhood, and how much we love each other." While men are often taught from an early age to internalize their emotions and avoid being tender, women are encouraged to be sensitive and vulnerable. "We don't have to make up words like 'bromance'," Ribon explained. "We don't have to justify it. We don't have to put a popcorn seat between us. We can say, 'That's my best friend and I love her.'"

There is still a universality to the story of two friends who are growing up. Unfortunately, that sometimes means growing apart. Although Ralph Breaks the Internet does spend some time exploring how going on the internet can be both a positive and negative experience (reading the comments, for instance), it sidesteps the obvious to instead focus on Vanellope's relationships: her evolving friendship with Ralph, and her blossoming friendship with Shank. "They're fans of each other and they respect each other," says Ribon of the "very specific feminine friendship" between Vanellope and her new pal. "But they're also able to talk to each other on a level that Vanellope just can't with Ralph, and that's okay."

As Ralph senses that his friendship with Vanellope is in danger, the true villain of the film emerges. It's not Vanellope's desire to pursue her dreams or her cool new friend that threatens to destroy what she has with Ralph – it's his insecurity. These seem like fairly mature concepts, but Ribon feels confident that younger viewers will take to it. Even kids are faced with existential dilemmas, no matter how slight they may seem to adults. She said, "My kid just started kindergarten, and she's like, 'If I don't go to this preschool, then I go to that school, and who am I?'

"We move, we change jobs, we change relationships and marriages, and we redefine who we are," Ribon said. Sometimes those definitions are forced upon us by others. Ribon remembers a moment in her personal journey when she felt pigeonholed by her own pregnancy, like she was only capable of being one thing, as if having a child wasn't a benefit to her creativity but a fundamental alteration of it. "People were like, 'Well what are you gonna write about now?'"

Perhaps informed by her own experiences, Ribon firmly believes we shouldn't talk down to children – something that really comes through in the writing of Ralph Breaks the Internet, which never feels condescending in its messaging. "I like that kids and parents are going to be able to talk about it after," said Ribon. "It's very relatable."

Ralph Breaks the Internet is in theatres now. For review and screening times, see our listings page.

A version of this article appeared in print on November 23, 2018 with the headline: BFFs, Online and IRL 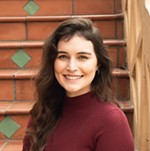 From the Dobie to Infinity ... and Beyond!
Stephanie Martinez-Arndt joins the adventure as part of the team behind Pixar’s Lightyear