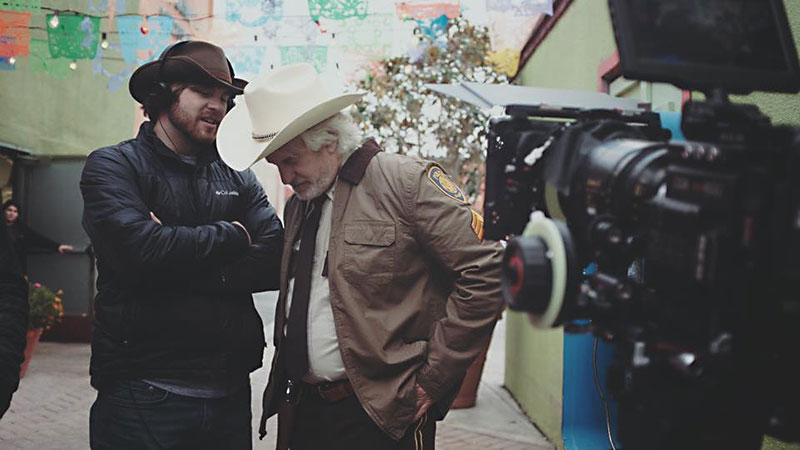 "He came from being a full-time dentist to being a lead actor." Director Tyler Russell on Texas Cotton star, George Hardy

Call Tyler Russell a repeat offender. In 2017, his short film "Texas Cotton" played at Austin Film Festival. A year later, he's back with the feature version by the same name, a gnarly, sly, and humorous crime drama about real estate, crops, and political corruption in the kind of city with only one stoplight.

Reversing the trend in recent years of Texas talents headed to Louisiana to find work in films, Russell quit the Pelican State to set up his production company in Austin, and his second feature is as Texan as a T-bone steak, shooting in small communities around San Antonio like LaCoste, La Vernia, Castroville, and Hondo. A Coen brothers-esque tale of unlikely villains and stoic small-town types, it follows Sarge (Troll 2's George Hardy) as he tries to unravel a mystery that involves dying cotton and exploding barrels, all while trying to stay small-town civil. Hardy met Russell on the director's first feature, 2016's Alabama-shot Here Comes Rusty, "and he was just the nicest guy in the world," said Russell. His cult status as a star of what is affectionately known as the best worst movie has, nearly three decades after the release of Troll 2, finally started parlaying it into an actual acting career. Russell is still a little astounded by how quickly Hardy gelled with instantly recognizable and respected character actors like Lew Temple (also appearing at AFF in The Iron Orchard – see "Iron Orchard Gets Its Day on Screen," Oct. 26), and Gene Jones (The Sacrament, No Country for Old Men). He said, "[Hardy] came from being a full-time dentist to being a lead actor with professional actors around him, and he knocked it out of the park, and that never happens."

Russell admits his own path to the set wasn't as easy. He wrote the feature a couple of years before the short, but the original first draft "was not a good script ... it was a 60-page outline of a thing that nobody would ever finish." So he took it down to the real LaCoste, to talk to locals about what life is like in cotton communities that are one failed crop away from bankruptcy. He said, "When you talk to the people you go, 'That's what it's like, that makes sense, that's where it needs to be shot, that's what we're missing, those are the people that need to be there, that's how they need to dress,' and then just make an entertaining movie around it."

That kindness of strangers didn't stop at the script stage, but continued throughout the shoot. He credited "city officials in LaCoste who pulled the strings, and locals who said, 'Oh, yeah, come shoot at our house, here's my truck, here's my trailer.' The local car guy, who let us use four of his cars for the entire four-week duration of the shoot. It never would have happened without those people. There would have been gaps all over the place."

What they helped craft was a story of underdogs, which extends to Sarge being, well, a sergeant rather than the more cinematically traditional sheriff. "I just wanted to change the sheriff to the sergeant, and then I can do a new film," Russell laughed, but that's another of the underlying truths he uncovered in LaCoste. "The chief, he jokes about his sergeant, 'He does everything, I just push the papers,' and that's literally what he told me." However, that helped sharpen the drama for poor Sarge. "It's harder for the character," Russell said. "There's more of a drive when you've got your boss, and you've got your people under you, and you've got more responsibility."