Puns, Pigs, and Puppets in Austin Web Series Buckle Up 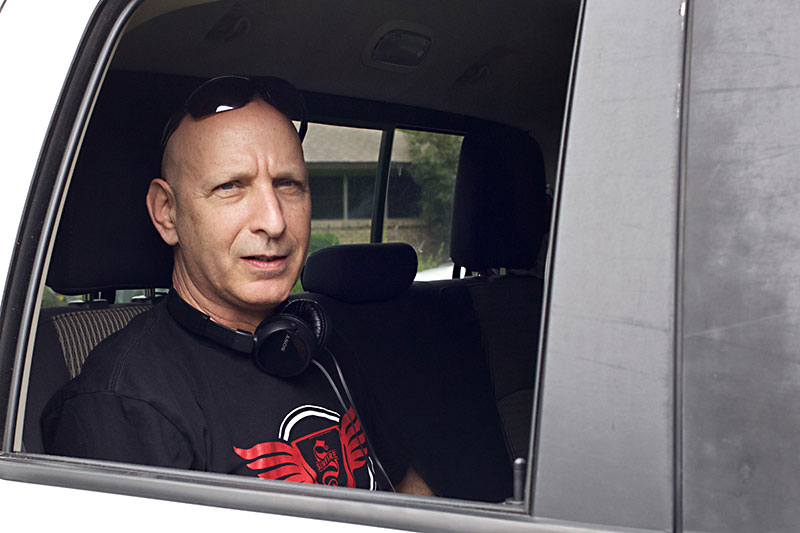 Riding dirty: writer Andy Silverman on the mobile set of Buckle Up

One of the best things about ridesharing is how uniquely terrible it can be. Sure, that driver who puns on the word "uber" in every sentence makes you want to jump out the window, but in the end you can't deny that his commitment to the joke is at least a little up-Lyfting.

Thankfully the new web series Buckle Up isn't a taxi version of the O. Henry Pun-Off, but it does take the idea of an eccentric driver to new heights. Written by Andy Silverman, who currently splits his time between Austin and Philadelphia, the show focuses on Finn (Nick Paul White), a driver for rideshare service Axxle, whose best friend sits shotgun antagonizing riders. That friend happens to be a pig glove puppet named Andouille.

The concept resulted from Silverman's experiences as both a passenger and driver. Inspired by a ride in which a 4.8-rated driver had one hand on a Big Gulp, another in a bag of Funyuns, and none on the wheel, Silverman asked himself just what it would take to get a bad rating. So he signed up to drive as research. "I was thinking, what I would say to really annoy riders. You'd get fired if you did that, but what if someone did it with a puppet instead?"

A meeting at the Austin Film Festival Writers' Conference with director Tyler Russell led to a collaboration on quick-hitting four-minute shorts, each packed with Triumph the Insult Comic Dog-style rants directed at passengers. Robert H. Lambert provides the puppet's crackly Cajun voice, his 6-foot-3-inch frame hidden behind a red velvet curtain as the riders take spins through the Mueller neighborhood. White plays Finn the driver as a polite bystander, good cop to Andouille's loose-cannon vitriol. The passengers typically fight back, but the pig always gets the last word. Like with Triumph, the insults are the main draw.

To an exhausted nurse: "Is resting bitch face a pre-existing condition? If it is, you're seriously out of pocket."

To a big-headed CEO: "If a testicle and a prune had a baby, it'd call you Dada."

To a musician ostentatiously Keeping It Weird: "Your guitar gently weeps every time you open the case."

The standout episode features a patient nun played perfectly by theatre veteran and acting coach Mj Vandivier. The sister humors Andouille's request for communion wafers ("church crackers") and questions about rosary protection against vampires, then gently encourages the puppet to attend confession. In a rare moment of self-reflection laced with sexual innuendo, he admits he's had impure thoughts. Her response is empathetic and delivered with grandmotherly charm: "Well, in this day and age, in this city, who hasn't?"

Six episodes make up season 1, all viewable on YouTube as well as Amazon Prime. After receiving award nominations at web film festivals in Seoul and L.A., plus a win at the L.A. Web Fest for Lambert (outstanding voice actor), two more seasons are in the works. The success is indicative of the recent boom in independent online content. "I have always written features, that's what I've been doing for years," said Silverman. "It took me by surprise how many people are really doing quality web series. It's nice that people are able to shoot their own rather than have to sell them to studios where they have all these restrictions. You've got more people who are just into the craft."

Watch season 1 of Buckle Up at www.battyink.com.