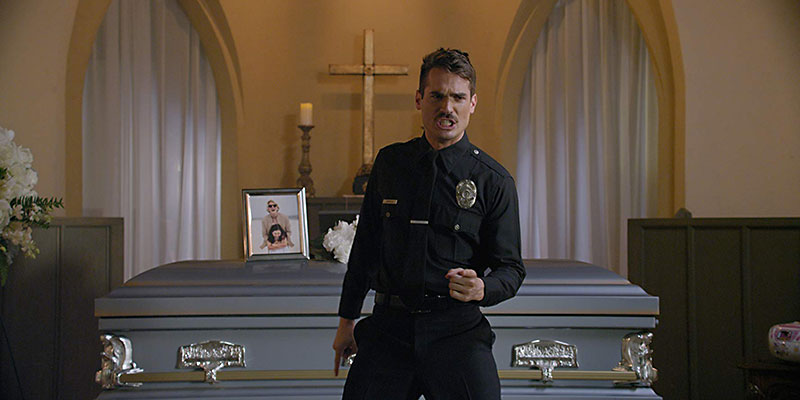 The business model for indie films is pretty rough: Make your movie, apply to festivals, hope you can get acquired, hope that the deal means eventually you can pay off that absurd credit card debt. Austin filmmaker Jim Cummings is part of a new effort to change that model, to the benefit of filmmakers. He said, "I remember I was walking down Sixth Street and thinking to myself, someday, very soon, someone is going to say, 'Fuck the system, we're going to put this out ourselves.' ... I didn't think that was going to be us."

Self-distribution is normally a dirty term in film circles, usually reserved for vanity projects by first-time filmmakers who want to throw good money after bad. By contrast, Cummings' new film Thunder Road had all the makings of an indie property the studios would love: Rave reviews at Cannes, multiple awards including the grand jury prize at SXSW this year. Yet all he got was offers from smaller distribution houses, which Cummings called "petty," barely half of the $190,000 budget. "We got a hundred-grand offer for a global deal for 25 years from the highest bidder," he said. "It's crazy."

“Fuck anybody that tells you you have to lose money in the film industry.” – Jim Cummings

He'd already experienced the mercurial world of film finance. After the original short version of "Thunder Road" won the grand jury prize at the 2016 Sundance Film Festival, Cummings started working on two features, but both got mired in development hell; so he started looking for a project that would both be cost effective to shoot and still intrigue him. Friends suggested expanding his 2017 short "The Robbery," but he heard the roar of "Thunder Road" and its misfiring central figure, small-town cop Jim Arnaud (Cummings, pulling triple duty). The scriptwriting challenge was that the short – Jim having a meltdown at his mother's funeral – felt like a finale. "These are the most important minutes of this guy's life, and I was imagining that that scene would have to be the climax. So the rest of the movie would be like 8 Mile – the guy has a terrible relationship with his mom, and then she passes away." The solution was to literally flip the script. "I went, well, wait, if this is the beginning of the movie, what does this little moment mean for the rest of the movie? It would have to be this Mike Judge-style Texas family drama comedy, and we'd get to do all this fun stuff of me trying to get my daughter to like me again. That would be so funny, but also poignant and heartbreaking."

The critical and audience response proved Cummings' instincts right, but getting it out to broader audiences seemed almost impossible. However, last year the Sundance Institute launched the Creative Distribution Fellowship, a new program designed to give filmmakers the tools and initial finance to get the film out there themselves. Cummings saw what it had done for the John Cho-starring drama Columbus (along with chronic fatigue syndrome documentary Unrest, part of an initial trial run) and decided this was the path for Thunder Road. Now with $33,000 in financial assistance from Sundance, he's handling everything from bookings to publicity to sorting out iTunes distribution – "Exactly what a smaller distribution company would do, except that we actually give a fuck about the movie."

The release isn't just an experiment for Cummings: It will be published by Sundance as a case study, and the results are already very promising, especially since it has taken $400,000 in three weekends in France alone, "just from the box office. Not TV sales, not DVDs or Blu-rays, not from any other licenses, just from one territory." His hope is that other indie filmmakers will be inspired by him talking about his success and the process, the same way he was by Columbus. If there's a message, he said, it's simple: "You can do this yourself. Don't be scared, and fuck anybody that tells you you have to lose money in the film industry."