Emmys, gen:LOCK cast, plus a good omen for film incentives 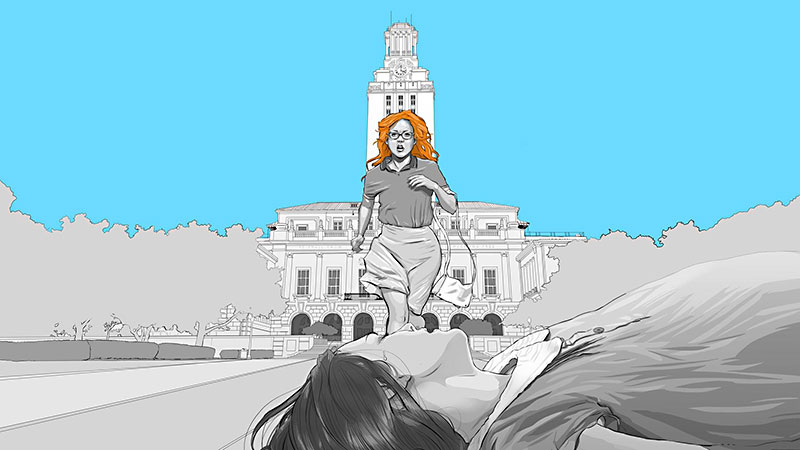 Tower, the devestating documentary about the 1966 mass shooting at the UT Tower, wins an Emmy

Emmys for Austin: Huge congratulations to two sets of Austin documentary filmmakers, who had to clear room in the trophy cabinet for that famed statuette or a winged woman holding an atom. First Austin's Bat Bridge Entertainment took the Sports Emmy for Outstanding Long Sports Documentary for their Showtime feature Disgraced, about the 2003 murder of Baylor University basketball player Patrick Dennehy and the subsequent cover-up of NCAA violations by senior Baylor staff. On Oct. 2. at the News & Documentary Emmy awards ceremony, Tower – the animated retelling of the infamous 1966 UT Tower shootings – took the prize for Outstanding Historical Documentary. Tower director/producer Keith Maitland compared the film's events to the seemingly never-ending stream of mass shootings in recent years. He said "The Tower shooting happened 52 years ago, but this movie isn't history. This movie and these stories play out time and time again."

And gold for another Austin filmmaker: Ray Zombie took the jury prize for best documentary at the inaugural Burning Hammer Film Festival in the UK for his debut as a feature director, Wrestling With Independence.

New leadership at the Texas Film Commission: Last month, Gov. Greg Abbott appointed Stephanie Whallon as the latest TFC director – a position that has been vacant since the last director, Heather Page, stepped down in September 2017. Her appointment may raise a few eyebrows and expectations, since Whallon moves from her old position of incentive program manager. Is this a sign that Abbott's office is going to finally put some support behind the woefully underfunded Texas Moving Image Industry Incentive Program? We'll see when the governor's draft recommended budget for the 2020-21 biennium is issued early next year.

Drive-ins are back, baby, and this weekend Austinites see double with the opening of Doc's Drive In Theatre in Buda, featuring not one but two screens. Owners Chris and Sarah Denny named the site in honor of their family doctor, who sunk his own savings into helping them open their movie dream. Visit www.docsdriveintheatre.com to stake your space for opening night on Oct. 12.

Austin Film Society has added two big names to its board of directors. Austin-born actor Mehcad Brooks (Eggs from True Blood, Rolly Marks from My Generation, Terrence King in Necessary Roughness, and currently on TV screens as James Olsen in the CW's Supergirl) and director Kat Candler (who just wrapped up her time as showrunner on OWN's critically lauded Queen Sugar) have been elected as prominent industry professionals to help guide the nonprofit.

Gen:LOCK, the upcoming animated series from Austin's online goliath Rooster Teeth, has added even more big-name talent to the voice roster for this sci-fi action show. Joining Black Panther's Michael B. Jordan, Dakota Fanning (The Alienist), Maisie Williams (Game of Thrones), David Tennant (Doctor Who) and Japanese VO legend Koichi Yamadera (Cowboy Bebop, Ghost in the Shell) are Asia Kate Dillon (Orange Is the New Black, Billions) and Golshifteh Farahani (Chicken With Plums, Pirates of the Caribbean: Dead Men Tell No Tales). Rooster Teeth confirmed at last weekend's New York Comic Con that the new show will debut on Jan. 26, 2019, and also announced that there will be an accompanying comic book series from DC, published later in the year.

Austin comic Writer Donny Cates is adapting his 2017 smash series God Country for the big screen, to be developed by Legendary Entertainment and AfterShock Media. Cates is currently writing Venom for Marvel.

Got any breaking news or tips? Email us at ATXFilmnews@austinchronicle.com.