Need to Flip a Car or Burn a Building Down? Call EB3 Effects. 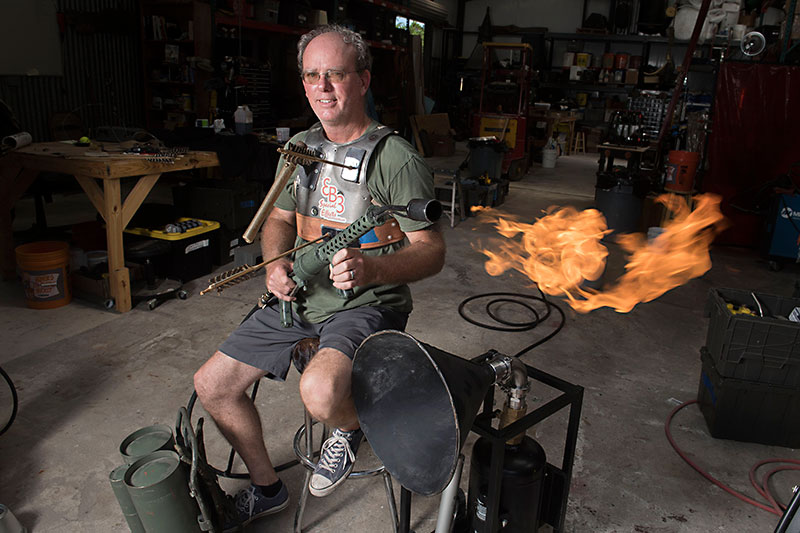 Go to the Byroms' place in Southwest Austin, and there's a disemboweled cow hanging from the ceiling of the metal barn. Over on a bench, there's a stack of molds for making knives, a bucket of arrows on the floor, a loaded bear trap over the fireplace, and a cannon hanging from the ceiling. Somewhere on a shelf, there's a machete that Jason Voorhees wielded. On the wall, there's a sketch of the Iron Giant, and if you were lucky enough to attend the Ready Player One activation during SXSW, you may have been one of the thousands that took a selfie with the full-scale version that Everett Byrom III and his brother Craig built here. They even built most of the barn itself, and are laying out the plans to extend the workshop that is the grinding heart of EB3 Effects.

"It's a museum," grinned founder and effects artist Everett, and the barn is just the beginning of the archive. "We've got a dry storage barn, a second effects trailer, and a sea container that's got all kinds of pneumatic slides and controllers, gear reduction DC motors. And you just know that some day you're going to need it."

The Byroms aren't pack rats. If you walked in and didn't know that this was where all kinds of movie magic had been made, you'd think it was an engineering workshop. That's because that's exactly what it is.

Cinema is built around spectacle, and when you need an inferno, or a car to flip, you call the Byrom boys. When the Dillon Panthers played in a downpour on Friday Night Lights, it was them that sent the rain. And when it literally rained cars for a dream sequence on American Crime, that was them too. Since EB3 was founded in 2001, Austin filmmakers have known they could call on the Byroms – so much so that Richard Linklater had them spend a couple of months in Pittsburgh for his upcoming drama Where'd You Go, Bernadette.

The brothers never planned to work in film. Growing up south of San Antonio, Everett started off as an all-purpose mechanic and engineer: repairing backhoes and semis one week, digging basements and caliche roads the next. He started playing in bands, and moved careers into apartment maintenance. If that sounds a long way from movie glamour, it was, but, Everett said, "I learned a whole bunch there. Just practical knowledge about plumbing, electrical, doing construction." When he finally realized after about six years that the music career wasn't going to take off, he quit his day job, moved to Austin, and started taking RTF classes at Austin Community College. His cousin was a radio deejay at the now-defunct Z102, and Everett thought he'd follow in his career footsteps: But this was 1993, when Dazed and Confused was shooting in town. Everett had already directed a short film for class, and credits one of his professors, Deborah Hill, with convincing him that he should head down to Richard Linklater's set, and see if he could find something. "They ended up having me audition, and I had a part in the Emporium scene." After a few nights of shooting, he made a simple decision: "I don't know what my place in this world is, but this is it for me. Because there were so many creative outlets, whether it was in the art department, or grip, or electric."

Aside from the fusion of creativity and practical skills, what appealed to Everett about filmmaking was "the intense focus on a project. Everybody getting super-tight, spending lots of hours hanging out, and then disbanding. That suited my personality, instead of a day-in, day-out schedule." 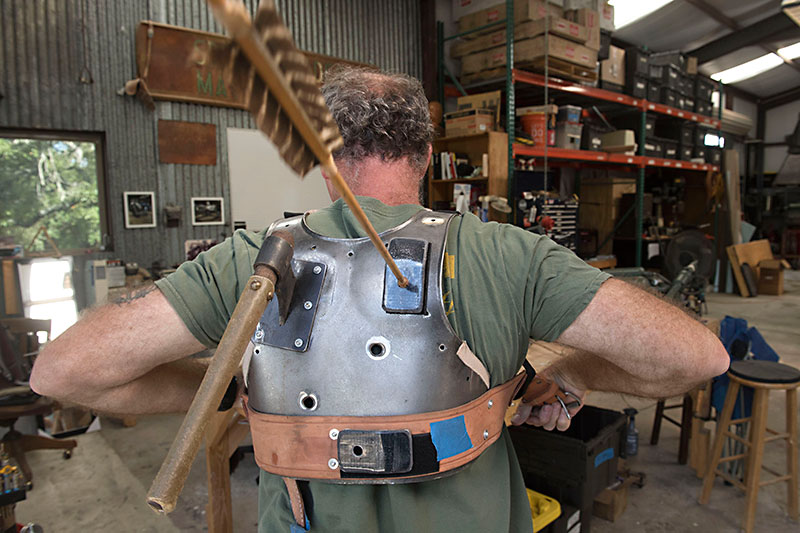 The path to effects work was almost as circuitous. In 1994, Everett convinced Craig to quit his day job working building management in San Luis Obispo to work as an on-set carpenter and foreman (not that he took much convincing: Craig said that after a few months as a super, "I realized I did not want to do this shit for the rest of my life"), and they were working together on the Western Frank & Jesse in Fayetteville, Ark. "I fancied the script supervisor," Everett said, "and she was looking to leave L.A. She came down after the show to hang out with us for a couple of weeks, and she decided to move to Austin." Everett flew to California to help her pack, and she invited him to a commercial shoot where she was working. That's where he met props expert Mike Haase, who convinced him to visit visual effects house Stargate Films. "He introduces me to the owner of the company, and starts pitching me like he'd known me five years. 'This guy can weld, this guy can mechanic.'" It turned out they were juggling a bunch of big projects, "and they were just looking for bodies," said Everett. "The guy who's in charge of the pyro miniatures, Robert Hutchins, was walking down the hall, and they called him into the office. 'Hey, Hutch. You need somebody to help you out? This is Everett.' He says, 'Sure. Do you have a pyro card?' I say, 'No, but what do I need to do to get it?' He said, 'Right answer. Come with me,' and we ended up working together for two and a half years."

Craig was already au fait with explosives, having joined the army straight out of high school as a military engineer, and then he trained in electrics and power management. So when Everett needed help building an electric car for a Disney show, of course he called his brother over to L.A. to help. "The second day I was out there," said Craig, "I got a page from the union hall, and they said, 'Do you want to go to work tomorrow?' And I said, 'Yeah, where?' and they said, 'Show up here,' and it was on Volcano."

The duo worked together and separately on a succession of big-budget Hollywood projects (Armageddon, Amistad, Dante's Peak, and Godzilla) "but," Everett said, "the whole time we were out there, we knew we were coming home."

During their time in L.A., the pair learned every trick of the effects trade from explosives to rigging to fire to rain and snow – "trying to become more diversified," Everett said, "so that when we came back here, we could be able to pull down whatever work came through." They've never stopped learning, still adding new skills to their inventory. On a work bench, there's a convincing-looking revolver – so convincing that Craig can strip it down, like he's going to clean the barrel. But pull the trigger, and there's no bang. They took an antique pistol, and rather than risk damaging it by pouring a mold, they broke it down into the body, barrel and cylinder, and then 3-D scanned each separately, printed 3-D models, then took the mold from that. Now the vintage original remains untarnished, and the actor has a realistic prop gun. For Everett, that's the real joy of effects. "More than flipping cars and doing explosions, and burning buildings, one of our deep passions is the simple mechanical gags. You know you've done your job when it goes unnoticed."

A version of this article appeared in print on August 24, 2018 with the headline: The Men That Make It Rain Cars