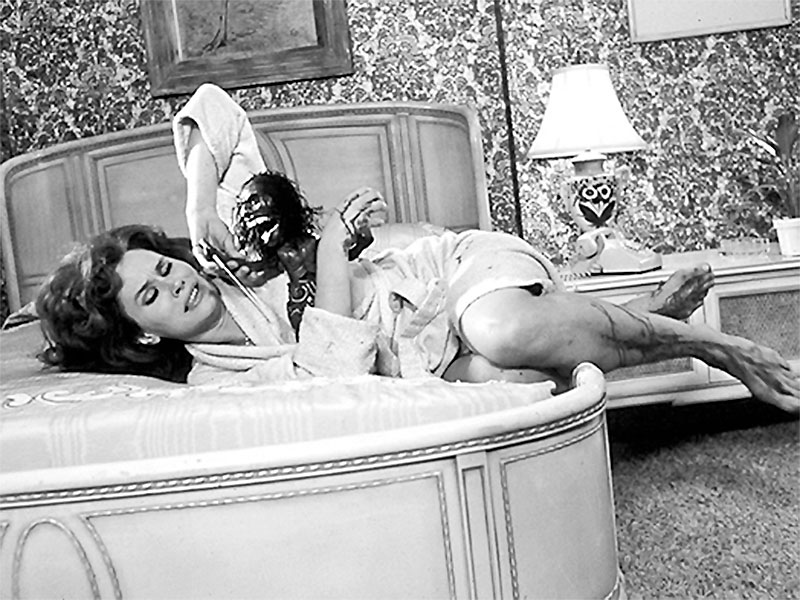 It may be hard to imagine now but back in the day, just a couple of decades or so ago, in the times before Blu-ray, cable, and streaming, most domestic viewing entertainment was received through three major TV networks (four if you count PBS) and maybe a local station or two. I'm from Las Vegas and that meant there were five channels to choose from. While prime time was absolutely delightful (Thank you ABC for all of your Seventies awesome, including Charlie's Angels and Three's Company!), weekend afternoons could be long and arduous for a couch potato kid like me, who wanted small-screen action and adventure, not documentaries or news. I was very lucky though because the programmer for our local weekend viewing was a VHF angel. I spent many a weekend afternoon transfixed by the images of marvelous content, ranging from classic theatricals such as That Touch of Mink to reruns of the British anthology series Thriller. But it was the made-for-television horror movies that really caught my attention.

Of course a few theatrical terrors crept into my lazy weekend watching (War of the Gargantuas still gives me nightmares) but it was the genre telefilms that both thrilled and horrified me. The first two TV monsters I remember seeing were in the eponymous Gargoyles and the little demons from Don't Be Afraid of the Dark. I was both enthralled and frightened, and those creatures became my gateway into a lifelong love of horror, following me into an arguably misspent adulthood consumed by rediscovering so many lost titles. (Confession: I couldn't bear to watch Dark in its entirety until I was an adult, and even then I had to peer through my fingers when the goblins arose from their underground lair calling for poor Sally's soul. Don't judge.)

But it wasn't just images of the fantastical that had me glued to my television screen; I loved the human monsters as well. The killer in Five Desperate Women was but a man, but he still offed the most sympathetic character in the telefilm. I was haunted by the image of him wrapping his large hands around her fragile neck. This proto-slasher introduction may be why I love that subgenre so much. (Don't judge again!)

There was also something hypnotic about visiting the supernatural via my television screen. TV movie characters that looked human but tended to dwell on the dark side of my youth include the infamous vampire Skorzeny from the pilot telefilm The Night Stalker, which introduced the world to Carl Kolchak, and a demonic little boy named Bobby from Dead of Night. Or the alluring bad girls dabbling in the occult, such as the beautiful but vengeful witch in Wes Craven's Summer of Fear, as well as the mean witch in cheerleaders' clothing from Midnight Offerings: I both loved and feared that sorceress, and perhaps secretly wished I could be her one day. (I'm telling you everything!)

But the most terrifying small-screen phantasmagoria came in a tiny package sometimes referred to as He Who Kills – better known as the Zuni Fetish Doll from Trilogy of Terror. Zuni came into (and destroyed) my life by way of my parents who were watching Trilogy on the Saturday Afternoon Movie. I was outside, actually getting some sun for once, and had come in for lunch. Instead of my requisite balogna sandwich, I was greeted (or assaulted, depending on how you look at it) with this insanely terrifying diminutive beast chasing Karen Black through her apartment. It screamed incessantly, stabbed her feet with a tiny knife, and eventually bit her neck, which leads the set-piece to its unnerving and unforgettable conclusion.

For better or worse, the made-for-television horror movie made me the person I am today. Warped, damaged, and perhaps a little too fixated on seeing every genre telefilm I can get my grubby paws on. But I have no complaints, because so many life lessons have been learned along the way. For example, no matter where I live, if I come across a bricked-over fireplace, I am venturing no further.

Amanda Reyes is the author of Are You in the House Alone? A TV Movie Compendium 1964-1999. This week Scream Factory releases John Carpenter's 1978 TV thriller Someone’s Watching Me! on Blu-ray with a new commentary track by Reyes. She hosts the Terror Tuesday Made-for-TV Mystery Movie, Tuesday, July 31, 9:30pm, Alamo Ritz. Tickets at www.drafthouse.com.