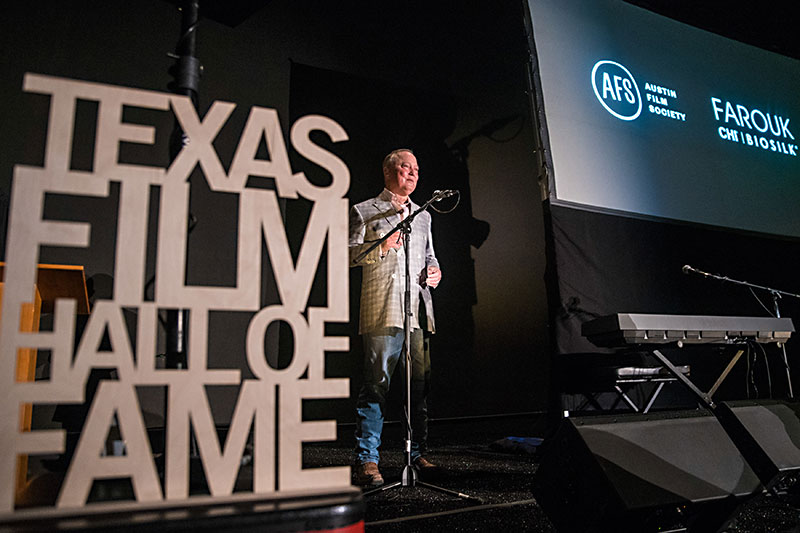 Is the Alamo Drafthouse planning its own MoviePass killer? The Austin-based cinema chain will start a trial run of their new Alamo Season Pass on July 18. Don't get too excited yet: The pilot program only applies to the Yonkers, N.Y., location. In a statement, Drafthouse management said, "We plan to test a variety of models and pricing structures to see what works as a sustainable model." Considering MoviePass' current financial woes, that sustainable component will be key.

A late but deserving addition to the Texas Film Hall of Fame: On June 23, John McCall was inducted into the prestigious club, in recognition of his years of financial support for the Austin Film Society. During the evening event, the hair care product mogul was serenaded by his old friend Kinky Friedman, as well as a surprise appearance by Joe Ely.

Location, location, location. Remember how we keep saying Austin is a movie town? Now we have the numbers to back it up. Data company Verve Search has trawled through all the shooting locations listed on IMDb, and found that more films and TV shows have been shot in the ATX than in any other city in Texas. With 2,257 credits and counting, we easily beat out Dallas (at No. 2 with 1,537 titles) and Houston (No. 3 at 1,279), and came in 14th overall globally. Sadly, we don't have the state's most used single location: Houston takes the honor, with the Johnson Space Center.

Interested in letting your home – or even your hometown – become a film set? New Republic Studios and the Bastrop County Economic Development Corporation, along with the Texas Film Commission, are running four public meetings in late July explaining the Film Friendly Texas program. That's an initiative to teach communities how they can become more accessible to filmmakers, and there are currently 120 Film Friendly certified communities around the state, many of which have seen the benefits of production dollars spent in their stores and hotels. Come meet the experts: Mon., July 23, at Bastrop Opera House (711 Spring St., Bastrop); Tue., July 24, at Elgin Public Library (404 N. Main St., Elgin); Wed., July 25, Smithville First National Bank (312 Main St., Smithville); and Thu., July 26, at New Republic Studios (140 Utley Rd., Elgin). The meetings will run from 7-8pm.

That's pretty cool: Not only is the Capital City Black Film Festival back after a two-year hiatus, but it's definitely bringing the thunder on its return. Stars Malik Yoba and Leon, aka Yul Brenner and Derice Bannock, will be in town to celebrate the 25th anniversary of beloved sports comedy Cool Runnings. CCBFF runs Aug. 30 to Sept. 1.