Parks and Rec star talks Austin, breakdancing, and the state of humanity 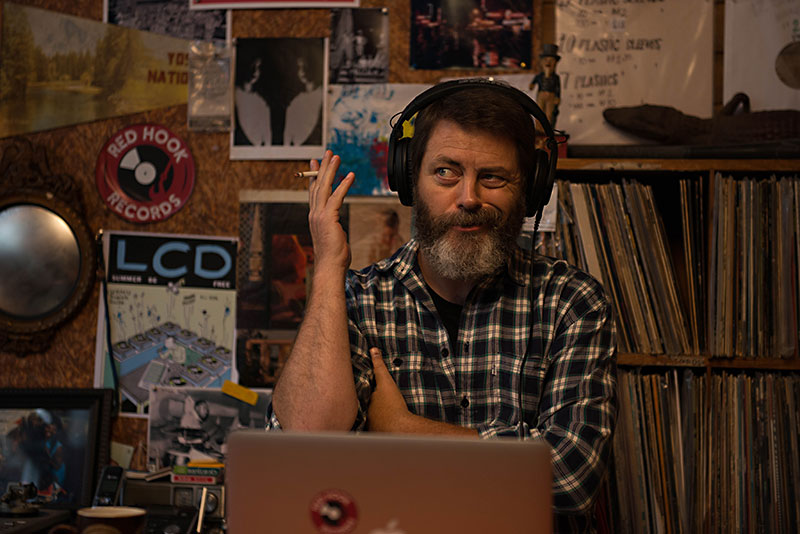 In Hearts Beat Loud, Nick Offerman plays an aging record shop owner who teams up with his daughter to restart a music career. When it premiered at SXSW, we caught up with Offerman, who called it "just a nice movie about some people dealing with shit in their lives. It turns out we really crave those kinds of movies right now. I'm really crazy about this filmmaker Brett Haley. His movies always have a good humor in them, but they also cause you to have 'all the feels,' as the young people say."

AC: Your character and his daughter write electro-pop songs. You're a musician; do you have a secret electronic album?

NO: No, that was totally foreign. This movie was actually the first time I played electric guitar, so I had to work really hard to play these riffs that are pretty rudimentary.

AC: You're a woodworker; what type of music do you listen to in your shop?

NO: I guess there's an Americana vibe, but I also had my breakdancing years, so there's a lot of Kool & the Gang, and Gap Band.

NO: I'm not kidding.

AC: Should we move the table to make some room?

NO: Well, it's a young man's game. Everything's cool with the popping and locking, but once you get on the floor it's over. My cousin and I had a team. He was called Flip Flop and I was called Tick Tock. If someone wanted me to do it for a film, I would happily try to get back into it.

AC: You often work with Austin director Bob Byington. What keeps bringing you back to him?

NO: We're fellow weird men. Shooting in Austin feels like coming home. There's nowhere I can go where I can't think, hey, that's where we shot that insane asylum scene. Or where Bob made me take my pants off. And then he never even put it in the film!

NO: I would just make a general statement, because it's something that we're all dealing with and it's what my next book effort will be centered around. When they started this country, they called it an experiment with good reason. I'd just ask everyone to take a deep breath before jumping right into the name calling. We're all human; 99 percent of us are probably pretty decent and you'd want to have us in for supper and we'd probably do the dishes if you gave us some coaxing.