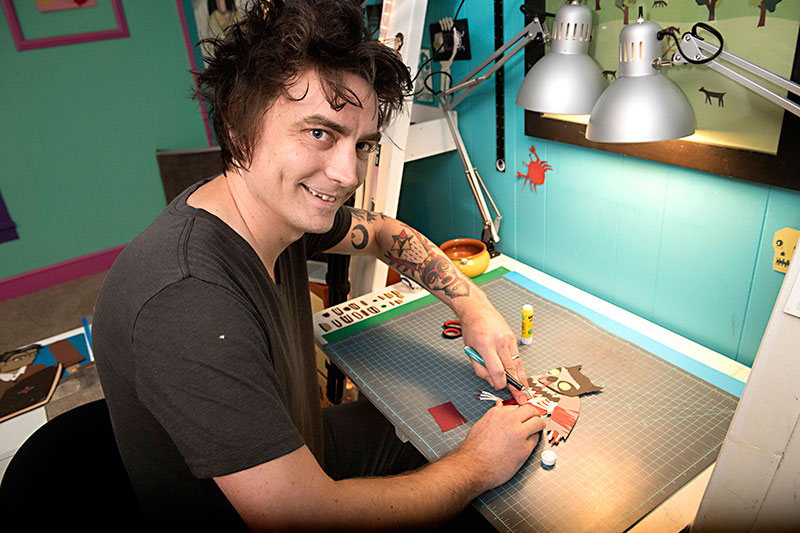 Eric Power in his home studio

In Eric Power's cupboard, there's a bag marked "Ninja Guts." It's part of the well-ordered debris from the Austin artist's first animated feature, Path of Blood, and a sign of his dedication to the elegant art of cutout animation. He said, "I used to want to just paint pictures, but it's so static. So eventually, it's, 'Well, this is cool art, but it would be better if it moved.'"

Cutout animation – the midpoint between collage and stop-motion – is the oldest form of animation. In 1917, 20 years before Walt Disney took Snow White into the forest, cartoonist Quirino Cristiani satirized the Argentine government in El Apóstol. The technique he pioneered – using 2-D paper puppets – is slow and laborious (that's why South Park gave it up after one episode in favor of CGI). But it's Power's preferred medium.

Power's animation studio is really a desk, with a paper cutting board, a stack of colored cardstock, a couple of lights, and a DSLR set up on a stand as a rostrum camera. The other side of the room is where his kids play, while the shelves are filled with a combination of his wife's research material (she's a research biologist) and his books on photography, animation, and comics. Somehow, the combination of the complete run of bloody samurai manga Lone Wolf and Cub and long runs of the Journal of Vertebrate Paleontology makes complete sense. "After I met her," he said, "I realized that I had to step up my game for anatomical correctness."

Anatomy dominates samurai revenge epic Path of Blood, in that there's nary a human body part that isn't chopped, sliced, and stabbed. Power has kept every character, every background tree, every road, every bamboo forest and castle, in plastic files, and the files are all stored in sealed plastic containers. There aren't many filmmakers that can honestly claim they have an entire movie world, every prop and location, stored in a handful of boxes.

Power didn't start off in the solitary world of paper cartoons. He first dabbled with computer animation in high school, "just playing, and making silly stuff." Then, like seemingly every artist in Austin, he got his first film credit on Richard Linklater's Waking Life. Animation director Bob Sabiston happened to be a friend of the family, and pulled him into the team. Power said, "I was only 17 at the time, so it was me surrounded by all these better artists." Even though he was only doing in-between work, "it was enough to get me excited about animation. I went home and I just started tinkering around, trying to make my own films."

Even then, he didn't see animation as his vocation, but a back door into live-action features, with additional cost-saving skills. He said, "I wouldn't have to pay for someone to do visual effects, because I could do my own animation."

In 2005, he made his first feature: Swordplay, a documentary about the Amtgard live-action role-playing society, which included around 15 minutes of Claymation and paper animation. The following year, he fractured the black-and-white cinematography of his second feature, Night People: Seize the Night, with bold frames of cut card primary color: the night sky in an azure blue, black skeletal streetlights sending cones of ethereal white down through a crimson sunset. This was not purely an artistic decision, but a practical one. He said, "I wasn't really able to count on people to be as into making the films as I was, and I didn't have the money to pay them to be there. If you can't pay them to be there, and they're not passionate about it, they're not going to show up. So I started looking at my paper characters, and I thought, well, I have my actors right here, and they'll do everything I tell them to do."

However, feature films don't fund themselves, so Power established a reputation animating commercials and music videos. His résumé includes a plethora of recognizable Austin bands, such as the Black & White Years ("Cold"), White Ghost Shivers ("Santa's Sack"), and Quiet Company ("You, Me & the Boatman"), and national acts like Gretchen Peters ("Blackbird"). His early work used computer animation and Claymation, but the turning point came in 2008, with "Year of the Dog" by the Lovely Sparrows. "It was entirely on paper, because I thought it would give a neat folk aesthetic, something simple and obviously made by hand." At that point, he said, "everyone started asking for paper."

The upside of that was that he quickly established a niche market as Austin's cutout animator. The downside was that there was no local cutout animation community to call on for help or advice. Aside from that experience in Linklater's animation division, and helpful advice from other paper cutters he met online, Power was completely self-taught. "Most of what I have done was trial and error – mostly error." In the earliest days, he used a timer on the camera, and ported the footage across to the computer later, hoping against hope that he got the shot. "I often had to go back and reshoot everything," he said, but now, with the technology improving and the camera linked straight to his monitor, "it's a lot easier."

His first viral success came in 2010, when singer-songwriter and friend Jeremy Messersmith asked him to do a video for his song "Tatooine." The paper retelling of the original Star Wars trilogy has clocked almost half a million views on YouTube, and now the scenes cover the walls of his office/studio/nursery. He'd already done a couple videos for Messersmith, but did this one solely as a favor. "I just wanted to do it, because I loved the original trilogy, and his song is all about that."

But the idea of returning to features never faded, so in 2011 he directed "Path of Blood – Demon at the Crossroads of Destiny" as a three-minute short and proof of concept. With a score by Many Birthdays (for whom he had animated the music video for "Days Like Turtles"), it was accepted into several festivals, proving that not only was a cardboard samurai epic technically possible, but there was also an audience for it. So the day after it screened at Fantastic Fest, he started cutting and folding and shooting what would become his first full animated feature.

It almost wasn't. He had several script ideas, and both Path of Blood and Attack of the Demons (a gory horror set in 1990s Colorado) were ready to go. However, the pastoral period piece won out – again, as is often the way for Power, for very pragmatic reasons. "It takes place in nature, with trees, and there's not many cities. I'm not very good at creating depth, and perspective with buildings – it's something I still struggle with – but with foliage, it's a lot easier."

In 2013, he finally unleashed his bloody mini-epic online, but he wasn't satisfied with just a low-res streaming release. "I love physical media," Power said, and in 2015 he read in genre movie magazine Fangoria that Synapse Films was releasing another neo-retro bushido flick, Samurai Avenger: The Blind Wolf (for an interview with director Kurando Mitsutake, see "Revenge Double Feature," May 29, 2015). "I was thinking, 'Well, shoot, if they like that one, they might be interested in mine.' So I just looked them up and wrote them, and asked if I could send a screener." Within a month, they had agreed to release it, and so began a two-year process of remastering the original version to get it ready for a Blu-ray release.

Now there's a stack of those discs on top of Power's desk, but he's deep in conjuring up Attack of the Demons as his second animated feature. Since cutting and clicking commenced, he's already finished 25 minutes of the planned 82-minute run time, but that's the end of almost as long a process as getting to shoot. This time, he has some investors (although he has financed much of it himself; shooting was delayed by a month when he took extra advertising work to stretch the budget). He had also spent the prior two years working on the script with screenwriter Andreas Peterson, to really refine every scene down to what is absolutely necessary – after all, he noted, "I am animating again by myself."

But after all this bloodshed, and ninjas, and zombies, Power is nowhere near done with cutout. His dream project, he said, would be a remake of stop-motion puppetry pioneer Ladislas Starevich's 1930 fable The Tale of the Fox. "A children's film."

Path of Blood is available on Blu-ray from Synapse Films now. For more of Eric Power’s work, visit www.ericpowerup.net.