Austin Writer Explores the Contradictions of Ted Kennedy in Chappaquiddick

Telling the tale of the shattering of Camelot 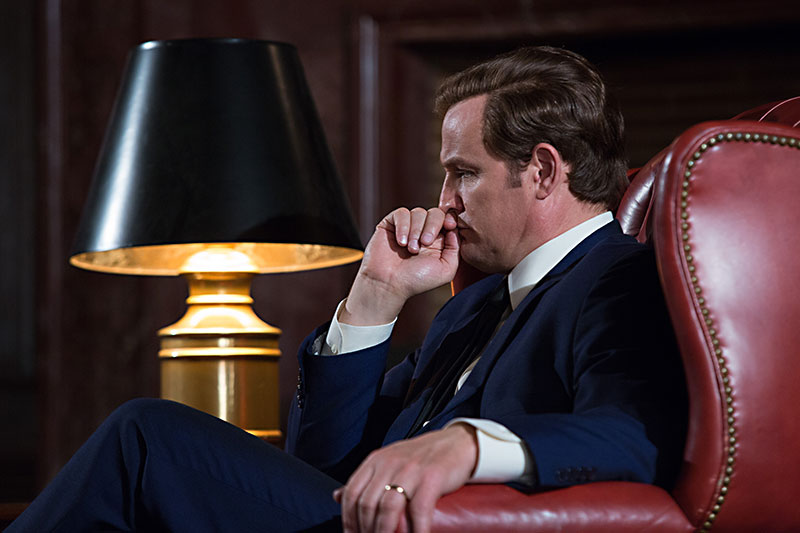 There are few political enigmas more shrouded in speculation than that surrounding a car crash on an island just off the coast of Massachusetts. In 1969, the sleepy beach community of Chappaquiddick became forever welded to American political history when then-Senator Ted Kennedy drove his car off a bridge. He survived, but his passenger – Mary Jo Kopechne, a former staffer to his late brother Bobby – died. The exact events have become fodder for conspiracy talk for almost a half-century, but Chappaquiddick does not try to resolve that puzzle. Instead, according to scriptwriter Andrew Logan, it is about Ted Kennedy himself, and the core question about his actions on that day. Logan said, "How can a man who has so much, who has the entire world handed to him, make such bad decisions?"

In the new film, which debuted at Austin Film Festival last year and opens nationwide this weekend, Jason Clarke (Mudbound) plays Ted, the man who was told he would be king, while Kate Mara is Mary Jo, his doomed passenger whose exact fate has never been definitely settled.

“How can a man who has so much, who has the entire world handed to him, make such bad decisions?” – Scriptwriter Andrew Logan on Ted Kennedy (Jason Clarke) in Chappaquiddick

Like the residents of Chappaquiddick, both Logan and his co-writer Taylor Allen know what it's like to grow up with the specter of the Kennedy clan's legacy always in the background. Both grew up in Dallas, and every family vacation, every road trip, even the daily commute, took them through Dealey Plaza. Logan said, "My dad's a lawyer, and the courthouse is right next to the Book Depository. I remember as a kid, going to see him in the court, [and] there's an actual X on the pavement marking the bullet that killed JFK."

Logan has long been a ubiquitous part of Austin's Arts+Labor production house, shepherding such noteworthy projects as Alan Berg's SXSW 2015 documentary The Jones Family Will Make a Way, and Hellion by Kat Candler. However, his Chappaquiddick script with Allen made its way onto the prestigious Black List of great unproduced screenplays.

When the pair started considering a Kennedy movie, they quickly realized that just about every member of the clan had been placed under the microscope – except for one. Allen said, "We've seen dozens of JFK stories, we've seen a handful of Bobby stories, but we'd never seen an actor playing Ted." That seemed like a major omission, so when they started writing three years ago, they saw a man who had seen history bearing down upon him – swiftly, mercilessly, and tragically. Allen said they conceived of it as a character piece about "this youngest Kennedy brother who had the weight of his entire family legacy placed on his shoulders after he saw his two older brothers assassinated, and his oldest brother die in World War II."

The script started as a full cradle-to-grave approach – "the Netflix series," Logan said – but that fell away as they found the story inexorably focused on the crash and its political and personal fallout. Allen said, "It was the seven days that was defining for Ted Kennedy's life, when the expectations for him completely changed."

The events of the crash are dramatic enough, but they also came at a time of upheaval for Kennedy. It was barely a year since his brother Bobby had been murdered on the presidential campaign trail, and Ted was in the first stages of considering his own run for the White House in 1972. On the night of the accident itself, Apollo 11 was speeding through space, fulfilling JFK's pledge to put humans on the moon. Logan said, "So you've got the highest point of the Kennedy legacy at the same time as the lowest point."

For Allen, that had to be reflected in how the script portrayed Ted himself. "He's an inherent contradiction, and his greatest strengths are also his greatest weaknesses."

As director, John Curran knew this was a challenging project. A self-avowed Ted Kennedy fan, he was sent the script by Jason Clarke's manager. "At first," he said, "I thought, Chappaquiddick, that's a tough one. So while I'm waiting for the script to come through, I'm thinking, 'Oh, I'm hoping it's not going to be over-apologetic, or this one-dimensional hit piece.'" Instead, he read what he described as "a portrait of Ted as a paradox. It had this great balancing act of pathos and humor, and for me reading it I had this real visceral experience that I was disturbed, and then laughing, and then disturbed that I was laughing, and had all these complicated reactions to it."

Inevitably, Curran had a dozen major questions for them when they first met, "because I thought there were just too many writerly inventions in this thing, and I wanted to break it down, because the strength of it was that it drew on the authentic details." However, Allen and Logan had a surprise for him: "Every single [plot point] was drawn from an authentic source. ... All the plot turns are factual."

Allen said, "It was a character study first, and it was never going to be a conspiracy theory. If it wasn't in the [legal] transcript, or a well-researched journalistic source, we would never include it."

That included the first person in Ted's orbit to break from the narrative that the family (at the direction of patriarch Joe, played with paralyzed fury by Bruce Dern) and its courtiers had established. In Chappaquiddick, that is Ted's cousin and Kennedy clan fixer Joe Gargan (Ed Helms), who fled from the inner circle. His increasing distress that the Kennedys were closing ranks for the worst reasons, balanced against his own loyalty, became apparent in the court transcript from the 1970 criminal inquest. Allen said, "Joe Gargan's testimony was markedly different than everybody else's." Logan concurred: "As a trained attorney who knows how to be a witness, it was clear that he was working through his moral issues up there on the stand."

While the writers worked assiduously to ensure that the script would be as factual and levelheaded as possible, they still knew they could face backlash about even tackling the topic – especially after they decided to shoot in Martha's Vineyard and on Chappaquiddick itself. Curran said, "We thought we'd have to fly really under the radar, and we didn't think we'd get permission. But except for not upsetting local ferry schedules, and traffic, once we cleared that we had nothing but support."

The only people that initially refused to cooperate with the production were the Roman Catholic Church (which declined to allow a real priest to take part), and the owner of the home opposite the infamous bridge. Her concern was not about the story, but rather, having grown up there, she'd lived through days when literally hundreds of tourists, gawkers, and conspiracy theorists clogged the road just to glimpse the bridge. Finally, even she warmed up to the crew. Curran said, "She stood around watching us shoot all day on the bridge, and by the end of the day she went, 'Yeah, you can shoot my house.'"

Chappaquiddick opens nationwide this week. For review and showtimes, visit our listings page.

A version of this article appeared in print on April 6, 2018 with the headline: The Shattering of Camelot