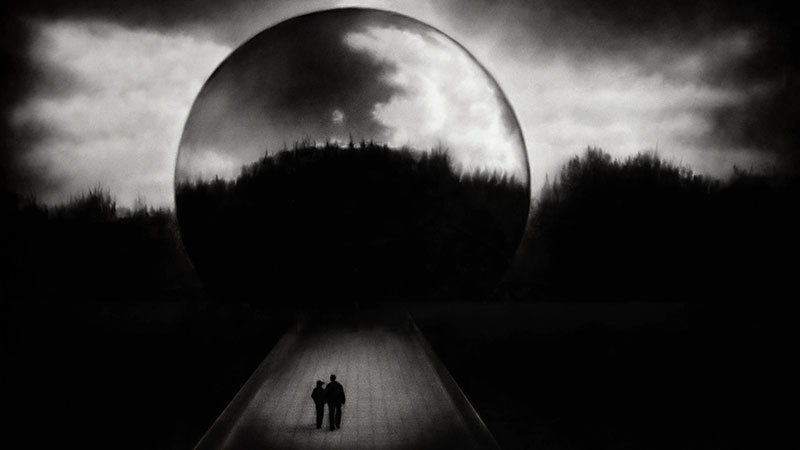 One of Austin photographer Rocky Schenck’s photos from PBS documentary Into the Night: Portraits of Life and Death. Director Helen Whitney called his work central to her narrative.

Benjamin Franklin was wrong. In 1789, he famously wrote to French physicist Jean-Baptiste Leroy, "in this world nothing can be said to be certain, except death and taxes." But death was a constant before there was taxes, and it is the one certainty with which we all live.

So why are we all so very, very bad at talking about it, dealing with it, preparing for it, even acknowledging that it is one of the very few parts of existence that we will undoubtedly face? Documentarian Helen Whitney cites the old witticism by William Saroyan: I know that death comes to everyone, but I thought an exception would be made in my case. Whitney said "I don't have an answer why our culture keeps it at bay."

It. The specter. The end of the path. The finishing line. Too often people brush death away with euphemism. Not Whitney, for whom it has become a subject of fascination, and the subject of her new film, Into the Night: Portraits of Life and Death. The documentary, which debuted at Austin Film Festival 2017, and will be broadcast on PBS on March 26, is intended to break the taboo of talking about the inevitable. Whether we discuss death or not, Whitney said, "It's a shadow that falls across your own interior landscape."

“Do we go with gentleness, with anger, with clenched fists, clenched teeth, with curiosity?”

Being interested in death is too often written off as morbid or gruesome, and Whitney's film is instead one of the first major documents of the Death Positive movement. Taking its name from body positivity, being death positive does not mean having a suicidal streak, or a ghoulish interest in the grave. Instead, it is about rebalancing the modern disconnected relationship with death, by starting the conversation before it becomes a necessity. Too many people, she said, only consider their mortality "at the end, when we're so sick, or in dementia, or killed suddenly, without being able to say goodbye, or living in tremendous poverty and dealing with a health care system that is worthy of 6,000 films. I found that the people that were shocked to mortality were the ones who were saying, 'I now know that I have to live consciously.'"

Whitney has never been afraid to tackle big issues that define personal identity. Prior works like Society: Class in Great Britain, Faith and Doubt at Ground Zero, and Forgiveness: A Time to Love and a Time to Hate. In part, Whitney traced her fascination with broad themes – rather than the tight focus on a single event or person that lures other documentarians – back to losing her parents at a very young age. "It made me an outsider," she said. "There was a lot of silence that I grew up around. 'Don't talk about it, it'll go away.'" Documentaries, she said, "are like a shield for a shy person. You can ask anything, if it's done with love and discernment."

Still, death was a tougher topic. With those prior big subjects, her friends would relish long conversations with her, "but with this one, there's a divide. It's not that anyone's not interested. It's either you see that deer-in-the-headlights look and they rush away to get the hors d'oeuvres, or they come close and can't stop talking."

Unlike many documentarians, who let events dictate the story, she makes her films more like a narrative storyteller, with months of interviews that serve as auditions for her main subjects, and a shooting script. Into the Night actually began as a completely different vision, with a different title – The Road Map. Its subject was not death, but "what's next – oblivion or afterlife? Those two binary opposites, and I was exploring what people felt about was next to come, and with that what is of value?"

Yet she soon found that the answers defied that simple binary thinking, and were much more nuanced. Even the very definition of what dead is, and to what point life can be extended, has changed so much. With that awareness, Whitney said, "It really then turned into a film about life, and not death. Yes, life intensified by the full-score roar of death underneath everything." She was faced with a new question: "Do we go with gentleness, with anger, with clenched fists, clenched teeth, with curiosity?"

It was the diverse voices of her initial interviews that changed the project: nine people who had considered death deeply. The first of these nine portraits is arguably the leading voice in the Death Positive movement, Caitlin Doughty – author, host of the successful Ask a Mortician web series, self-described funeral industry rabble-rouser and, as Whitney called her, "a force of nature." She was joined by figures like astrophysicist Adam Frank, religious writer Phyllis Tickle, cardiovascular surgeon and cancer patient Jeffrey Piehler (who surprised his wife one day by announcing that he was going to build his own coffin), and author Jim Crace, who Whitney credited with providing the words that helped pivot from The Road Map's "what next?" approach to what Into the Night became – that people were seeking "not necessarily a narrative that's true, but a narrative that gives solace."

The three-year shooting of the film also meant, almost inevitably, that she was confronted with her own search for solace. Her longtime editor and friend, Ted Winterburn, became ill and died during production. "To say that was unnerving was the understatement of all time. To say that the subject of the film is far too close to the filmmaker."

Winterburn's illness almost derailed the project, and finally she dedicated the finished film to him. However, the work of another longtime collaborator is as deeply ingrained in the work: Austin photographer Rocky Schenck. She first experienced his vision while she was in Austin for a convention during the filming of her 2007 PBS series The Mormons. She wandered into a bookstore, and saw one of his books. "I sat down in a corner, and couldn't believe what I was seeing. I called him immediately, and said, 'Your work is amazing.'"

His photos became part of The Mormons, but Whitney described them as central to Into the Night, "much more so than any other images in the film." The appeal, she said, "is the mystery at the core of experience is one of Rocky's great subjects." Moreover, his imagery speaks to the inevitable fact that dying is a totally individual experience. "Those portraits of people sitting in a hotel lobby, or that famous one of a man in a tux at a table, or sitting in a park alone – not lonely, but alone. The opening of the film is, we're united in this, every one of us is united in this inevitability, but we have to do it alone."

Trying to cram all of death into two hours is an impossibility. That's why Whitney did not try, as she already has a second full film in the wings, in which she tackles "the new palate of possibilities." That includes the growing debate about the right to choose how we die: That's an issue gaining increasing urgency as baby boomers, who have lived feeling they should have total control over their own medical care, start making their own end-of-life care decisions. "But that's not really talking about it," said Whitney. "'How do I control it?' is an important subject, but it's still not the whole subject."

Into the Night: Portraits of Life and Death debuts on PBS at 8pm, March 26.