Robert Rodriguez Goes Back to His Roots for New Reality Series 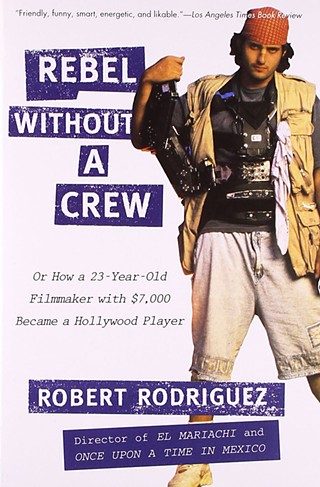 In 1991, an up-and-coming young director from Austin called Robert Rodriguez created a piece of cinema lore. He raised $9,000 from being a medical guinea pig, took off to Mexico, spent $7,225 of that cash, and made his debut feature El Mariachi. Two years later, he told FilmMaker magazine that when he asked executives at Columbia (which finally distributed the movie) what they considered low-budget, they said $7 million. He said, "I told them I could make one thousand El Mariachi's for that. I would have enough films to fill my own cable network."

Twenty-five years later, and he does have his own cable network – the Hispanic-audience-focused El Rey – and while he may not have those thousand $7,000 flicks, he's started the process with his new reality show Rebel Without a Crew. "It went hand-in-hand with why I started the network," said Rodriguez. "I didn't need a network to keep myself busier than I already was, but I saw it as a training ground for aspiring talent."

This week, Rodriguez will be filming the last episode of the series, to be broadcast later this year on the Go90 network and El Rey. The criteria were pretty simple: The competition was open to any first-time feature maker, but they had to have already made a short, and they had to have a feature script in hand. "It's never ideal to drop everything and make a movie for no money," said Rodriguez, but "we still got over 2,000 submissions in just a few days."

The thousands of applicants were whittled down to five first-time filmmakers, and each was given $7,000 to shoot and edit their script into a full feature. Plus, there was one surprise sixth contestant: Rodriguez put himself in exactly the same super-low budget situation – an experience he called "a palate cleanser" after his biggest movie ever, the upcoming Alita: Battle Angel. Yet even he had to stick with the bare-bones stipulations. "People had said, you'll raise the budget for inflation, and I said no."

That said, the modern filmmakers had one huge advantage. When Rodriguez started shooting in July 1991, he used an Arriflex 16S – borrowed, because he couldn't afford the $2,000 to rent a camera. However, the cost of shooting on film burned up most of the budget, "so there's really only about $600 onscreen." So while the budgets were not index-linked (nor did they get that full $9,000 Rodriguez raised by getting biopsied by Pharmaco), the filmmakers had more to play with. Plus, he said, "We rented them really decent digital cameras at a good price."

Rodriguez still has that old Arriflex, and brought it to set so that the contenders could experience dealing with film. The big problem, he said, is that "it's really noisy," and that meant re-recording most of the dialogue (a misery he put each of the contestants through, just as a learning experience). By comparison, even prosumer digital equipment is virtually silent, but the filmmakers still had the experience of celluloid, and for Rodriguez it's the experience that means everything. When he made El Mariachi, he said, "I was surprised to find how many movie makers don't shoot and cut and light their own films." While he's now famous as virtually a one-man crew, it's really about learning what every on-set job is, so a director will never ask the impossible. "It's empowering," said Rodriguez. "It will change your entire viewpoint of what is impossible. If you make yourself do it, you learn so much ... you're going to be completely different people in three days, never mind 14."

A version of this article appeared in print on March 9, 2018 with the headline: Rebel With a Cable Show