Where the man ends and the mask begins in Being Frank 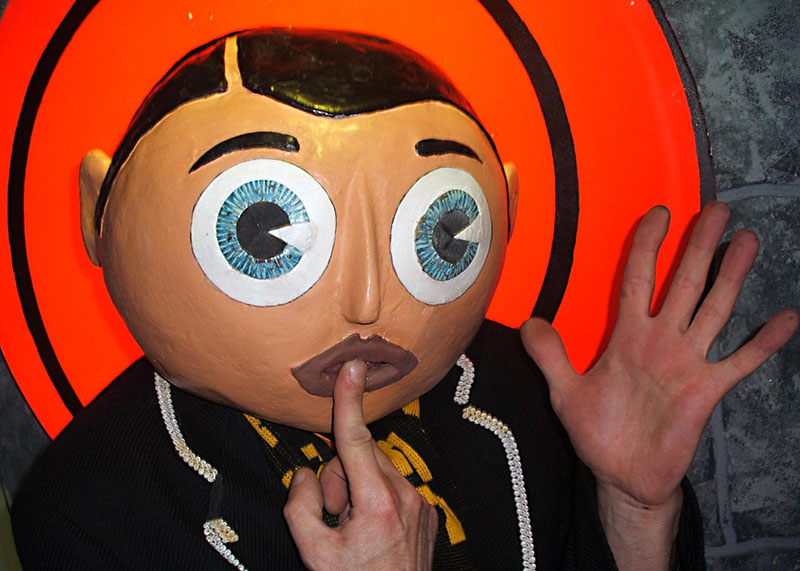 Once upon a time, in a little English town called Timperley, there was a man called Chris Sievey. He would wear a giant papier-mâché mask, and talk in a funny voice, and become a soccer-obsessed, jovial musician called Frank Sidebottom. Or maybe the mask would wear him. To this day, even documentarian Steve Sullivan, who examines this extraordinary outsider artist for Being Frank, is unsure where the man ended and the mask began.

Explaining Frank Sidebottom is like explaining Pee-wee Herman, or Andy Kaufman. There was nothing logical about why he'd jump from presenting a talk show for kids out of a fake garden shed, to recording an album of Queen covers, to driving people around Timperley (pop. 11,000) in a double-decker bus, like he was showing them the seven wonders of the ancient world. But he did, and audiences loved him for it.

But there was also Chris Sievey: a husband, father, pop-punk musician, video game pioneer, tech enthusiast. That's who Being Frank is about, even though that was a greater challenge than Sullivan had expected. He died in 2010, by which point most of his early work, including an almost-hit single, was nearly forgotten, and many of his closest friends were sworn to secrecy. Sullivan said, "The whole process of making the film was an investigation into who was that guy. Even though I'd met him and worked with him, I still didn't really know much about Chris."

The first time Sullivan crossed paths with Sidebottom, he was working in a comic shop in the town of Preston, when Sievey called him to organize a public appearance. Only it wasn't Sievey. It was Frank. "At the time, it was the most famous person I had ever spoken with," said Sullivan. "I went and got my boss and told him, 'It's Frank Sidebottom on the phone, the guy from the telly with the fake head.' About a minute into the conversation, I just remember my boss looking at the phone in a really confused way, and putting it down and walking away. ... He just looked totally confused and went, 'Well, I would have said goodbye, but we got about a minute into the conversation, and Frank just yells into the phone, "Oh, I've got to go, me mum's just come in,"' and slammed the phone down on him."

Years later, Sullivan joined Frank for his Magical Timperley Tour (which he called "this absurdist day out"), and filmed it for a short documentary. "But," he said, "I spent more time that day with Frank than I did with Chris. I only met Chris for two or three minutes, which were very strange." His sound engineer asked Sievey if he could put a mic on him. "Chris just said, 'Why?' Our sound guy went, 'Well, to get sound quality.' 'Why?' Then he goes, 'Oh, you're probably talking about Frank Sidebottom.' 'Yeah, we want to put a mic on Frank.' So he says, 'I'll tell you what's going to happen. I'm going to go home now. Frank's waiting in my living room. He'll come back, and I'll tell him that you want to put a mic on him, and it'll be fine.'"

When Frank returned, he laid down and took off the head so the mic could be fitted. Sullivan said, "I'm looking at Chris Sievey going, 'I just had a conversation with you about this.' But Chris wasn't in there. He was totally blank, looking up at the clouds going past in this open top bus. I'm looking at him, going. 'I don't know if you're genuinely not there anymore, because you're genuinely Frank Sidebottom, or if you're doing this for my amusement.' And I still don't know."

Being Frank: The Chris Sievey Story

A version of this article appeared in print on March 9, 2018 with the headline: A Life Under Papier-Mâché