A Fresh Look at Gentrification in SXSW Feature Blindspotting 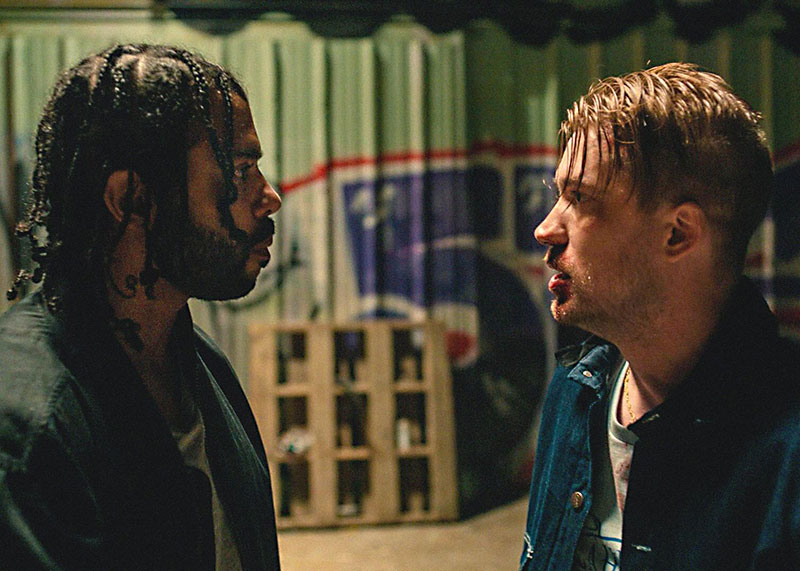 Don't ask what Blindspotting is about. It's about every raw nerve in America – guns, gentrification, racism, rehabilitation, self-identity, and cultural perception – and how it's happening in Oakland, California.

When Tony-winning original Hamilton cast member Daveed Diggs and his lifelong friend Rafael Casal decided to write and star in a comedy-tinged drama about modern America, as seen through the eyes of two underdog friends, it had to be against the backdrop of their own hometown. Diggs said, "I always describe Oakland as streets virtuosity versus the mundane. Having that woven into the way the script feels is one of the more Bay Area things about it. It was one of the huge challenges – is there a way to represent the way that huge issues are tackled or at least acknowledged, without it feeling heavy?"

It was a long, slow process to build out. According to Diggs, the one question they asked themselves after developing a scene was "Does this feel honest? Does it feel like the Oakland that we're trying to represent? Everything came back to that, trying to paint an accurate depiction of the area where we're from."

For Casal, Blindspotting is about "two cities living on top of each other" – old, rough Oakland, and its new gentrified version. That's the Oakland that parolee Collin (Diggs) and his best friend/worst influence Miles (Casal) are navigating, and Casal called them "two guys who live in one city colliding periodically with people who live in a totally different city, and they're just alternate dimensions on top of each other." The two are far removed from Casal and Diggs' own friendship, he added, "but they are members of our community that we know very well. ... The proximity to those kinds of voices and that kind of energy, because they are so commonplace in the Bay Area, it made inhabiting them feel second nature."

While the film is two friends playing two friends, there was a creative downside to their 17-year history together: Their real intimacy made shooting a few scenes tougher, not easier. Diggs said that seven hours hurling racially charged slurs at his friend, even in character, "was a pretty rough day .... Any time that Miles and Collin are yelling at each other actually proved to be harder for me than it would have been with someone I don't know."

Much of Blindspotting is about perception, especially when it comes to gentrification: like the running joke about even bodegas selling cleansing juice drinks. The nuance of the issue is in scenes like Miles and Ashley (Diggs' Hamilton co-star Jasmine Cephas Jones) talking about how running hustles will pay for their kids' preschool: In that moment, though they don't know it, they're talking about gentrification. Diggs said, "They're just expressing the views of parents trying to figure out where to send their kids to school, in a way to give them the best head start in a world which is so tricky. ... The problems with gentrification aren't indoor plumbing or the new yoga spot. It's the overlooking and erasing of culture that has already existed."

For Casal, that's part of growing up in a city that was known as "the scary place, or the place not to go," which is now becoming desirable to people who may not have set foot there a decade ago, and didn't grow up with the parades and warehouse parties that made the city so vibrant for longtime residents. Casal said: "The people who know a different Harlem from the ones that are moving in, or a different Oakland, or a different Austin, and it's very hard to look at each other, and be talking about the same place, and see two completely different places. ... It's always really uncomfortable when someone who did not grow up there, who just moved there, tells me that Oakland is so beautiful, largely because the thing that they find beautiful about it is sitting directly on top of or in front of the things that I find beautiful about it."

A version of this article appeared in print on March 9, 2018 with the headline: Once Upon a Time in Oakland