Life cut short for no good reason. The story is as old as what's now called Texas, and as relevant today as it ever was. Two mutually antagonistic groups of high school kids from wildly divergent social backgrounds collide in a parking lot and rumble it out with chains, bats, and no small amount of beer. The Outsiders, S.E. Hinton's 1967 classic narrative of teen-on-teen pathos and hormone-fueled class warfare, pitted Tulsa's clean-cut "Socs" against the troubled but deep-down sweetheart greasers Ponyboy Curtis and his pals. Thirty years later, in the parking lot of Amarillo's now-demolished Western Plaza, 19-year-old punk rocker and artist Brian Deneke was run over and killed by 17-year-old Dustin Camp, driving a 1983 Cadillac during a "jocks versus punks" melee across from mutual teen hangout IHOP. Jason Deneke, Brian's older brother, cradled the fallen boy's head in his hands screaming for help as the snow- and rain-pocked lot ran red with his little brother's blood.

Both stories end with a senseless death of a misfit kid with all the world before him. Hinton's novel didn't have a Caddy, but what happened on Dec. 12, 1997, could serve as a real-life lesson that the more things change, the more they ultimately stay the same.

Now the murder of Brian Deneke has made it to the movie screen with the arrival of Bomb City, a fearless and intense, not to mention emotionally supercharged recounting of the events leading up to what everybody who was there simply refers to as "that night." Camp, according to court transcripts, growled "I'm a ninja in my Caddy! I bet he liked that one!" as his car struck the leather-wearing and mohawked Deneke from behind, killing him instantly. A JV footballer for the Tascosa Rebels in the wealthy enclave of the Wolflin neighborhood, Camp was charged with first degree murder, but finally found guilty of voluntary vehicular manslaughter. He shockingly only received 10 years' probation and zero prison time. In 2001, he finally went to jail for five years – not for the murder, but for violating his parole.

“Brian was an artist, which kinda got lost in the whole story over the years.” – C.J. Ramone on Dave Davis as Brian Deneke in Bomb City

The horrific incident and light sentence for Camp cleaved Amarillo – the deeply conservative "buckle of the Bible Belt" – in twain (the film gets its title from Amarillo's other nickname: Bomb City, after the nearby Pantex Plant, America's only nuclear weapons factory). Overnight it garnered not just Texas' attention, but that of the pre-internet media landscape. Oprah, Dateline, 20/20, Texas Monthly, pretty much all of the big news shows picked up on the story and ran with it. Op-ed pieces painted Amarillo as the town without pity. And then the world moved on.

(Confession time: I attended Amarillo High School in the early Eighties and co-operated one of the city's first punk rock venues, the Web, after being kicked out of UT for attending too many Big Boys and Offenders gigs and far too few classes. I eventually high-tailed it outta Amarillo and permanently moved to Austin in 1990, took a job with The Austin Chronicle a year later, and have been a die-hard DIY punk rock writer ever since. That's my story and I'm sticking to it, but buy me a cider and I'll tell you about the time Black Flag actually brought down the ceiling at my old club.)

Bomb City is the feature debut of Dallas-based director Jameson Brooks, who co-wrote the screenplay with Sheldon Chick. "Jameson and I were born and raised in Amarillo," Chick said. "The story of what happened to Brian Deneke was a part of our youth, and so when we felt we were ready to make a feature, that kind of crept into our minds again. There's a real lesson of tolerance built into that story."

It's a story whose retelling has gained the support of a true punk icon: C.J. Ramone, former bassist and vocalist with legendary prototype punks the Ramones, who watched the film after producer Major Dodge sent him a copy. He said, "My gauge for how good a serious movie I've just seen is if I feel like I need to have a drink afterwards. And I definitely needed a drink after watching Bomb City. ... It's definitely very moving, very powerful, very shocking, but the things that I really liked most about the movie are the things I didn't already know about the story. Brian was an artist, which kinda got lost in the whole story over the years." 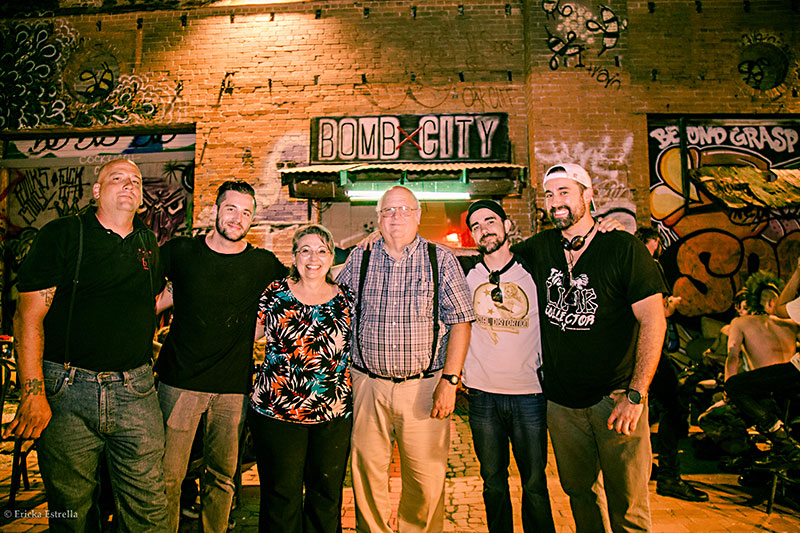 Although the murder is at this point two decades past, memorial tags on an untold number of punk and punk-friendly websites have kept Deneke's tragic story alive. In a grim twist of irony, those websites, and indeed the whole of the World Wide Web, were in their infancy when Deneke died. A champion of the small but tireless Amarillo punk and arts communities, and booker of roadshows at venues like the Retina and the Egg, Deneke had to go old-school to lure in bands off of Interstate 40: telephone, talk, badger, repeat. That identification with Deneke as not so much a "punk" as he was a human being is a key strength in how powerful Bomb City plays. Early on in the film, editor Jake Wilganowski employs a minor masterclass in crosscutting between the punks moshing to a band in a dingy club and the Tascosa football players and cheerleaders brilliantly lit on the football field. It's a sequence that ties the two ultimately disparate groups together in a communion that's strikingly similar but still worlds apart.

After its world premiere at the Dallas International Film Festival in February of last year, the film and filmmakers returned to Amarillo on Jan. 23 for its first hometown screening. The Amarillo Globe-News Center for the Performing Arts is a space usually reserved for the city's symphony and ballet, but on the night of the screening the 1,300-seat theatre sold out completely. It had only managed that once before since its opening in 2006 – perhaps too predictably, a Brooks & Dunn concert.

The screening and Q&A went off without a hitch, but the old divides still linger ("I think we're going to double the security," Dodge said before the hometown show). Speaking on the potential for pushback from within the Amarillo community, Chick said, "We knew the story was divisive at the time but we also had the 20-year gap and the support of the Deneke family, which was first and foremost for us in terms of just being able to tell the story. We tried to stick to the public record as much as we could and place the audience back in the seats of the jury, and let people make their own decisions. We didn't want to be too heavy-handed and we also wanted to ensure that Cody Cates [the character based on Dustin Camp, played by Luke Shelton] would come across as human. The event was a tragedy all around, and we wanted to be conscientious in the way we were depicting everybody in the film."

Producer Major Dodge backed that up. "First off, if the Denekes hadn't given us permission to tell this story, the film never would have been made. They've become family to us and at this point they've seen the film so many times. Somebody asked how they could sit through it, and they do it as a celebration of their son's life. It's therapeutic for them and it helps to start conversations, it helps people identify with the Deneke family even more." 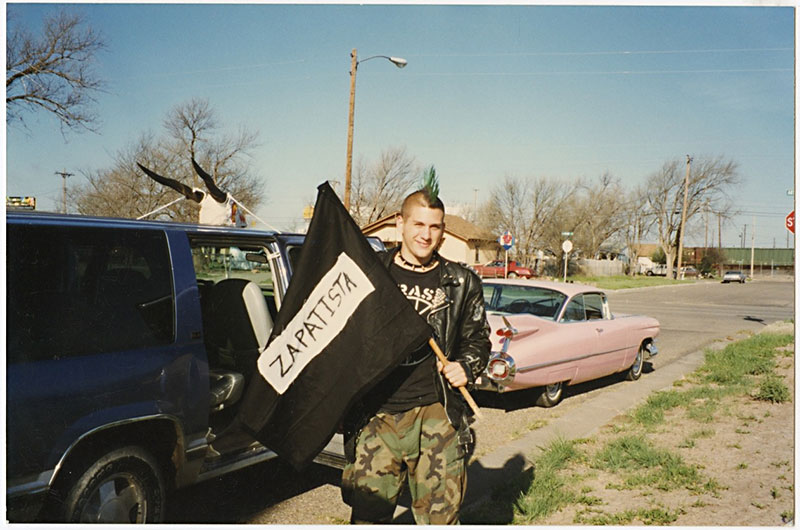 The center of the story is Dave Davis (Logan, The Walking Dead) in a sympathetic yet highly detailed performance as Brian Deneke. Backed by supporting performances by Austin's own Lorelei Linklater (Boyhood), Dallas native Glenn Morshower (24, Parkland), and Logan Huffman (V), Davis' challenge was to nail a complex character that could have easily sunk the entire film had it felt even a tad off. Your average audience might not know, but a punk can spot a poseur a mile off, and still has the time to form two bands, three fanzines, and solid tolerance for fermented beverages by the time the faux-hawk arrives. "Going in," Davis said, "I had a lot of trepidation, because this was a really raw, true story. And I got the role just three days before filming, although I'd been aware of the story and had done some research and prep work but that was all very, very surface level at that point. ... I was filling in a lot of blanks and using a lot of intuition."

The support of the Denekes for the project was key to taking Davis back to 1997 Amarillo. He said, "What really helped me into the role of Brian, the thing that I drew from personally as an actor, were key photos of Brian, talking to his friends and family and in particular listening to the way his parents spoke, and then drawing a connection to how Brian might've spoke, you know, being influenced by movies and TV, how his speech would have shifted." The first night on set changed everything for Davis. "A friend of Brian's came up to me and said, 'You're freaking me out, you look just like him, you sound just like him,' and I had to break character and say 'Really? Because I'm really concerned on getting it right if you have anything to tell me,' and they said no."

Brian Deneke is gone now, but punk's (still) not dead, in Amarillo or anywhere else for that matter. Given the current ultra-partisan divide in America, the lessons of Bomb City couldn't be more timely or more necessary, as Dodge himself noted. "It's completely relevant now even though it happened 20 years ago. And similar things still happen. Not long ago, up in Fort Worth, there was the story of Ethan Couch, dubbed the Affluenza teen, who ran over a bunch of people while he was drunk and almost got off scot-free. I feel like every high school student needs to see this movie."

A version of this article appeared in print on February 9, 2018 with the headline: A Murder in Amarillo