Monthly fest for underdogs and up-and-comers 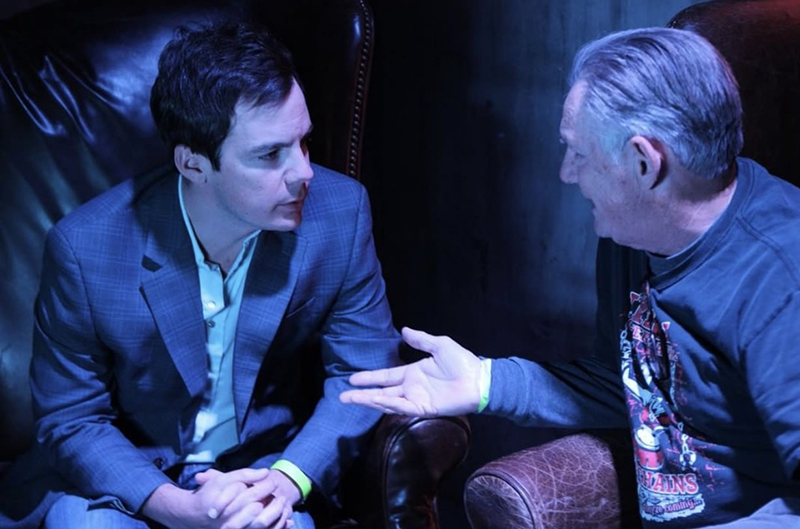 Filmmaker to filmmaker: Devin O'Rourke ("Anything I Can Do") and Gary Gannaway (Virgin Cheerleaders in Chains), January winners at the Austin Spotlight Film Festival

Go to enough film festival Q&As, and it's the same questions. Where did the idea come from? How did you get cast? What did you shoot on? At the monthly Austin Spotlight Film Festival, the questions are more practical, like film school recommendations, and funding sources. That's because this festival is as much for filmmakers in the audience as for those screening their work. Festival founder Ali Alkhafaji said, "What I take away from these moments is that anyone can be a filmmaker, and that's the beauty of film."

Alkhafaji and his team first turned on the Spotlight last November, filling a three-hour monthly event with a simple format: shorts, trailers, music videos, even crowdfunding pitches. The subject matter is as diverse as any festival: In the January show, there was a documentary about Austin's weird homes tour, a drama following a farmer forced to abandon his son, and surrealist sketch comedy, with a woman dumped for not using puns. Each month, the audience selects a single film, and next November there will be the great screen-off, "which will be like the playoffs, so all the audience selections will square off," said Alkhafaji.

While it's the Austin Spotlight Film Festival, there are no restrictions on where a film can be shot. January's roster featured a heavy home field showing, plus entries from Houston, San Antonio, New York, L.A., and even India. But while the films may be international, Alkhafaji said he feels the show is distinctly Austin. "I've moved all over, and I've got to experience different pockets of film, and different ways that universities run their film program. Austin is the only one where I could run a monthly event like this, and be as successful as we have been. There's something about people who come here that's so warm and inviting."

The seed for the show was planted last spring, when Alkhafaji held a similar, one-off show at the Butterfly Bar. "I just opened it up to the general public and Facebook friends, and from there we had an overwhelming response, and saw a need for people in the Austin film community to have a platform." That feeling was amplified last October, when he hosted the Austin Under the Stars outdoor film festival. "There were people reaching out to me on pretty much a daily basis, asking when the next call for entries was, when's the next event date. I didn't really like the fact that I had to tell people, 'It's another six months before we can show your project.'" Being monthly, he said, "I want people to know we're always there."

Austin Spotlight is not intended as the antidote to the annual festivals, but to complement them, and provide even more, and more immediate, opportunities. Alkhafaji said, "Once you create a project, you have a lot of momentum and energy to really promote it in the best way possible. To see that project, up on the big screen right after you finish it, is the best feeling in the world. Even if you don't win anything, it's the pride in your project, and knowing that it got into a festival, and knowing that a lot of people sat there and watched it with you."

A version of this article appeared in print on February 2, 2018 with the headline: A Spotlight on Austin Film