An array of extravagance to geek out on 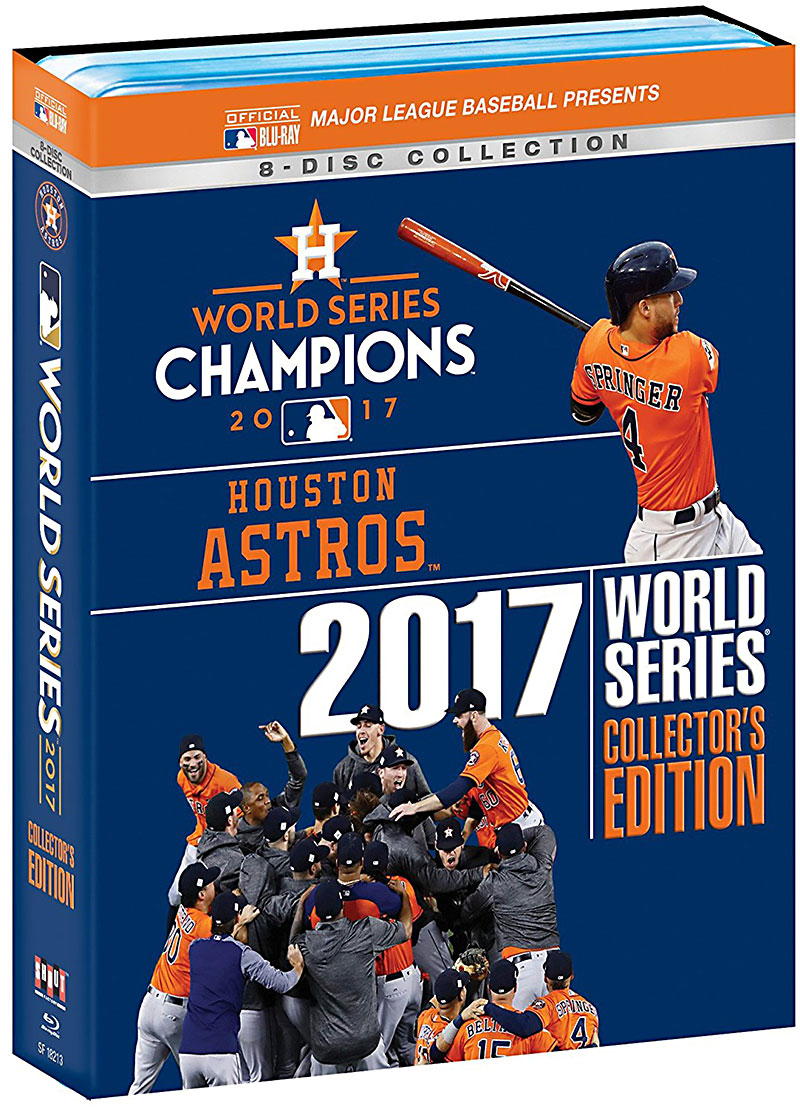 $79.99, www.mlbshop.com
The Houston Astros franchise began play in 1962 as the Houston Colt .45s after William Neder won a "name the team" contest. The Colt .45s was/is a cool name. I wish the Houston Texans had done the same and picked the name I came up with: the Houston Smog. That's a really fucking cool name. The helmets would have featured a black smog cloud on each side. Instead they chose the second-worst name in the NFL: the Texans. The Redskins take home the prize for worst name. By far. But I digress.

In 1965 the .45s changed their name to the Astros and moved into the Eighth Wonder of the World: the Astrodome. That lasted until 2000, when they moved into Enron Field. For some reason in 2002, they decided to change the name to Minute Maid Park. In 2005, the Astros made it to their first-ever World Series facing the Chicago White Sox, despite starting the season 15-30 and the Houston Chronicle publishing a tombstone with the epitaph "RIP Astros' Season." They had to make the World Series due to the reverse jinx rule. They did and were promptly swept by the Sox in four games.

In 2014 during a major rebuilding period when the Astros were the worst team in baseball, Sports Illustrated put George Springer on the cover and predicted the Astros would be the 2017 World Series champions. And guess what? The Astros won the 2017 World Series, beating the three top payrolls on their way (Boston, N.Y., and L.A.) with Springer being named WS MVP. If you are an Astros fan, like I am, this is a dream come true. How many of us who have lost our fathers wished that they could have shared that moment with us? Something we will never forget. This can never be taken away from us. No matter how many Trump presidencies and Hurricane Harveys come our way, this is ours. 'Til we die.

Now you can relive and savor the entire series forever with Shout Factory's 2017 World Series Collector's Edition: Houston Astros. An 8-disc complete game set on Blu-ray and DVD (there is also 2-disc set), it includes every pitch of the seven-game series vs. the Dodgers, plus the pennant-clinching game 7 win over the Yankees. Bonus features include a short piece called "Houston Strong," on the effects of Hurricane Harvey on Houston and the Astros' return home afterwards.

If you have an Astros fan on your holiday shopping list they are sure to love this. Games 2 and 5 are worth the price of admission alone. Who knows when it'll happen again, especially with the news that the Yankees just acquired Giancarlo Stanton, but we'll always have 2017. – Mark Fagan


Munchkin – the madcap card game from Austin's own Steve Jackson Games – is a global phenomenon. Only problem is, there are so many supplements, it's impossible to choose which variant to get. This gift pack solves that conundrum: three different games (classic Munchkin Lite, fairy tale-themed Munchkin Grimm Tidings, and the magical Munchkin Spell Skool), all individually wrapped in a special gift box. Give them as one big present, or separate them out between friends, and keep the five new bonus cards included all for yourself. – Richard Whittaker

$12.50, www.buildabear.com/porg/025306.html
Pre-gift pro tip: persuade your recipient to renounce their favorite song from being "Do You Want to Build a Snowman?" to "I Would Like a Build a Porg Then." Once that's done, perhaps they'll bawl, but remind them it's a necessary trade to prepare for the imminent porg fever (unless those crystal foxes take over the public zeitgeist). Let's hope this bundle of cute and reactive expressions doesn't turn out to be a First Order informant. – Nguyen Le

$9.99, www.funko.com
Funko! The name that strikes terror into every collector's heart. The collectible empire has done adorable deformo figures of everything from Star Wars to Bob Ross, and now it's Santa's fuzzy horned friend who gets the vinyl figure tribute. With his cloven hooves for chasing the naughty across the snow fields of Bavaria, and his birch twigs for giving them season's beatings, this Christmas demon has never been more adorable. – R.W.

“They’re Coming to Get You! A Holiday Horror Art Show,” Guzu Gallery, 5000 N. Lamar;
“Pray for Death! A John Carpenter Tribute,” Leona Gallery, 1700 E. 12th
Everyone knows there's spirits in the air at Christmastime, but not all of them are kind. So head to Guzu Gallery for a seasonally themed tribute to cinematic terror at "They're Coming to Get You," with prints and original pieces galore to add an extra chill to your gift giving. There's also time to RSVP for the Dec. 16 opening reception of "Pray for Death! A John Carpenter Tribute" show at Leona Gallery, featuring original works by artists including ...And You Will Know Us by the Trail of Dead's Conrad Keely and multi-instrumentalist/gubernatorial candidate Thor Harris. – R.W. 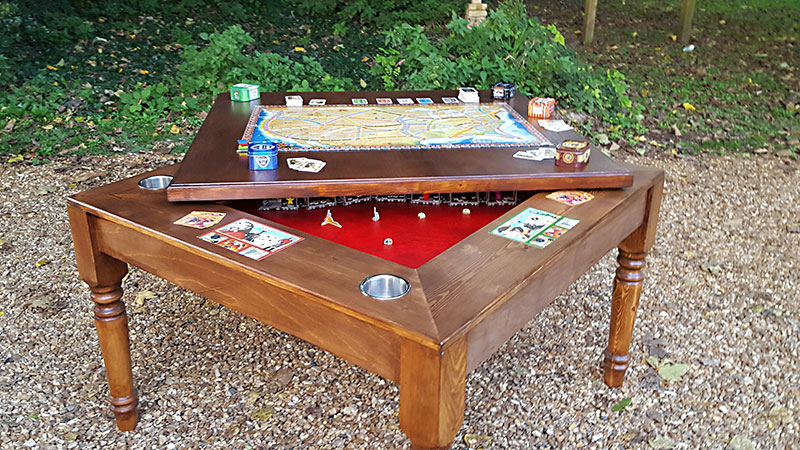 $1,400-3,000, www.kingmakertable.com
Are you the type of geek who dreams of leveling up his or her board gaming get-togethers? Local carpenter Doyle Koenig is ready to make that dream a reality with his new gaming table venture, King Maker Table.

All tables are fully customizable and can be delivered to anywhere in the Austin area. Just have some patience – they take some time to build, so Santa might have to sneak one under the tree in January. – Tucker Whatley

Bring Out Your Inner Wonder Woman

Gone are the days of making Wonder Woman's bracelets out of toilet roll tubes. Now you can choose between two different adult-size options. Official DC licensee Bioworld has a tiara and cuff set ($21.99) based on the 2017 smash hit movie, or go retro with the classic Linda Carter tiara ($12.45) and wristbands ($12.99), complete with that Seventies red star. If that all seems a little decorative, then you can pre-order a replica of the God Killer sword from Sideshow Toys ($249.99), a full 32 inches of Themysciran steel. – R.W. 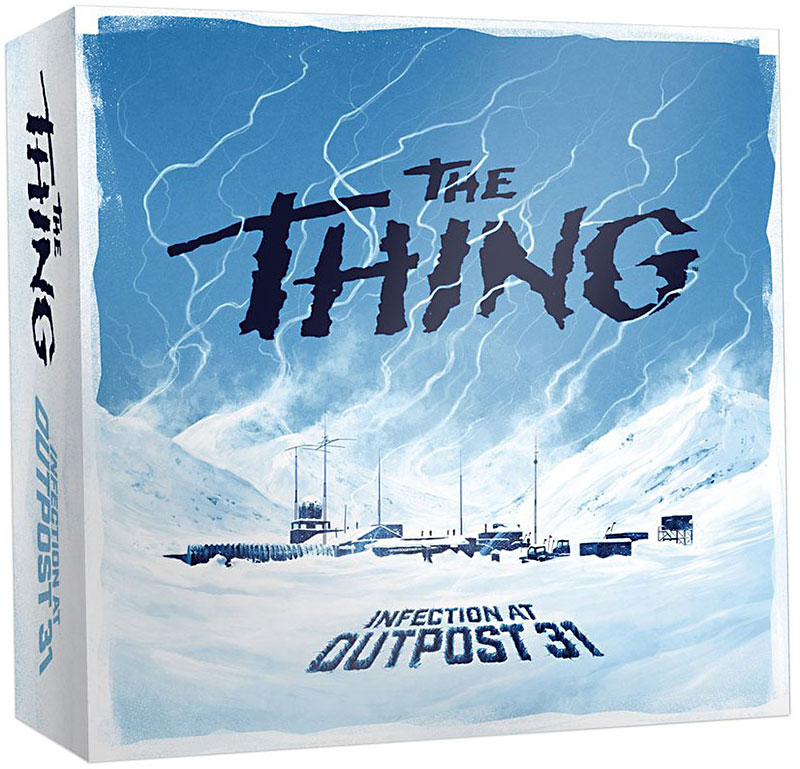 The Thing: Infection at Outpost 31

$60, www.mondotees.com
It's nice that the board game renaissance is thriving but please note that the "buyer beware" caveat is in full swing. You can't just turn any intellectual property into an engaging evening with your friends. But this game, based on John Carpenter's classic 1982 remake, The Thing: Infection at Outpost 31, puts you and your crew smack-dab in the middle of the Antarctic research facility, attempting to navigate sections of the board as you try to make it safely to the helicopter to win the game. But at least one (probably more) are infected, and that turns the game into a battle of wills between people who have that stolid poker face (not me), and people who do not (me). Let it be known that if you are the infected player(s), you're in for a wild ride of deception, and if you aren't infected? Well, you better be able to figure out who is, because otherwise you're fucked. – Josh Kupecki

The Chronicle’s 2017 Holiday Political Survival Guide
Borscht in a Bag, a male chastity belt, and more gifts to get you through the rut 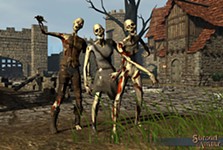