The Trauma of Thanksgiving Films

Or, how to alienate your family this holiday season 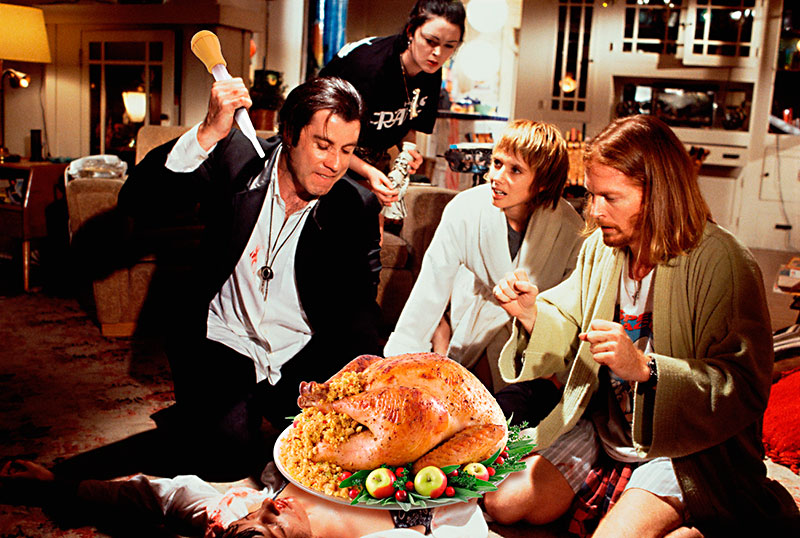 It was a tradition that started early on in my childhood: After the turkey and fixins, after the pumpkin pie and various cobblers, after the requisite football games had lulled the elders to an afternoon nap, it was movie time. Growing up, it was afternoon matinees of James Bond and Sergio Leone West­erns on a dated convex TV screen as us kids flopped on top of each other on the limited seating spaces of couches and Barcaloungers, lazily watching Clint Eastwood paint a whole town red or Sherlock Holmes race through the cobblestones of Victorian London on the heels of Jack the Ripper. When the uncles and the grandparents did rise from their post-feast slumber, things inevitably turned to more conventional fare, and it was in those years that I developed an acute distaste for Gone With the Wind and The Wizard of Oz, so ubiquitous were those two films around the holidays, and don't even mention the name George Bailey within my earshot, as that holiday film will always be the cinematic drug that puts me straight to sleep no matter how many times a bell rings.

Then comes the time of my angsty teenage years and early 20s, when I was an insufferable film snob who thought he knew everything (not much has changed, come to think of it). I would actively introduce more provocative viewing fare for the post-feast screenings, actively curating a laundry list of films to rouse my uncles and cousins. Some of those gems include Peter Greenaway's The Cook, the Thief, His Wife & Her Lover (despite the edgy material, I lost half of my audience in less than an hour), Takashi Miike's Audition (admittedly a poor choice, but it definitely had a marked effect on a couple of nieces and nephews), and Peter Weir's Picnic at Hanging Rock (perhaps too lyrical and meditative after gorging on a big meal). Learning these lessons, I opted to introduce more action-oriented fare, and one of my most cherished memories is having my grandfather wander into the living room about halfway through all of us watching Pulp Fiction. He commenced to ask endless questions throughout the rest of the film ("Who's that guy?" "I thought that guy was dead?" "Why is John Travolta stabbing that woman with a needle?" etc.). This caused no shortage of groans from the peanut gallery, but it remains one of my most endearing memories about the man. Alternatively, the less said about my grandmother wandering in while Gaspar Noé's Irreversible was playing, the better.

This was 20 years ago and then some, and obviously the options for post-Thanksgiving viewing in 2017 are legion. From the warm blanket of English baking shows and Murdoch Mysteries to the cacophony of spandex-clad heroes and villains offering up mediocre, CGI-fueled thrills, the sheer overabundance of films may give one a certain paralysis when navigating family viewing options. So, in the spirit of counterprogramming, I offer up these suggestions, based on three barometers: 1) Status Quo: Anything with Tom Hanks, Russell Crowe, or Meryl Streep will placate even the most politically divided family. 2) Passive-Aggressive Insurgency: Perhaps marathoning episodes of Nathan for You (the absolute best thing currently on the planet), or a nice socially conscious documentary such as The Look of Silence, 13th, or Whose Streets? to let the family know without saying so. 3) Nihilism or Bust: While some of the aforementioned films may have lost their shocking sheen of outrage, I would recommend brooking no quarter, so go with Julia Ducournau's amazing "I became a cannibal in veterinary school" film Raw, or perhaps Lars von Trier's Antichrist, because nothing screams holiday cheer like a talking fox bemoaning the death of order. Happy Holidays!