The film, starring Frances McDormand, could hardly be more timely or controversial 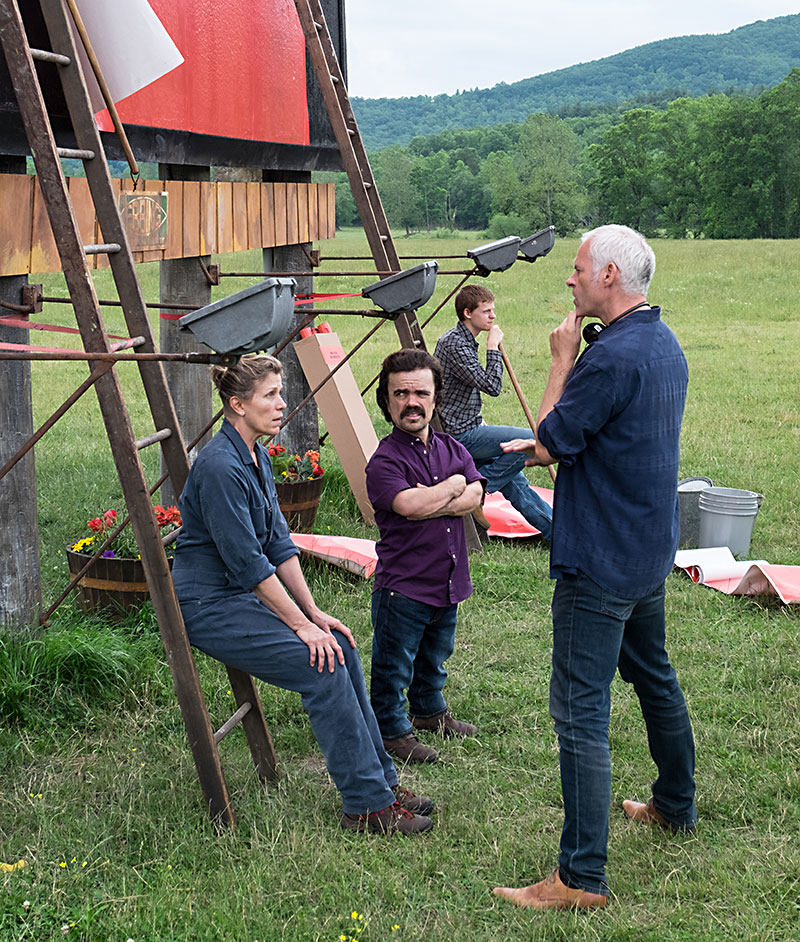 From left: Frances McDormand, Peter Dinklage, and writer/director Martin McDonagh on the set of Three Billboards Outside Ebbing, Missouri

When an artist transfers between media, there is a certain liberation. As Martin McDonagh has moved from writing for the stage to writing and directing for stage and screen, he has been able to subvert what is expected from the studio system. He said, "I feel like I'm not really part of the Hollywood business anyway, so I'm not going to be writing to please those kind of people. I'm always going to be telling my own kind of peculiar story."

His latest film, Three Billboards Outside Ebbing, Missouri, could hardly be more timely or controversial. Blue-collar Mis­souri­an Mildred (Frances McDormand) has suffered an incalculable loss: Her daughter, raped, murdered, and her body incinerated by her assailant. When Mildred feels that the investigation, headed up by local Police Chief Willoughby (Woody Harrelson), is going too slow, she rents three billboards on the slow country road near where her daughter's corpse was left. On them, she challenges them to solve the case. Yet, this is not a simple procedural, with a valiant mother looking for justice in the face of legal indifference. McDonagh said, "Part of the whole story is about what happens when there is no solution to a crime. Where does that rage and anger go when there's no one to put it on? She rages against anyone that's even peripherally culpable, but no one is really culpable. That's why it escalates the way it does."

Three Billboards has become oddly prescient. It was supposed to receive its U.S. premiere in Austin at Fantastic Fest this September, but distributor Fox Searchlight pulled it at the last moment after the revelation that the festival had rehired disgraced writer Devin Faraci. In the rapidly expanding scandal of how the film industry has turned a blind eye to sexual harassment and assault, its timeliness has only grown.

As a writer and director, McDonagh is no stranger to controversy. He burst into cinema in 2008 with In Bruges, a dark but oddly heartfelt comedy about an assassin (Colin Farrell) finding a strange redemption after a hit gone horribly wrong. His follow-up, 2012's Seven Psychopaths, was part high-concept crime comedy, part Hollywood satire. Yet before becoming a filmmaker he had honed his scripting talents as one of the leading playwrights of his generation. His 1996 debut, The Beauty Queen of Leenane, made the almost unprecedented jump from the bleeding edge Druid Theatre Company in Galway, Ireland, to London's West End – a fitting transition for McDonagh, who was born in England to Irish parents. That one play launched him into the upper echelons of contemporary theatre, his work balancing on the line between extraordinary controversy and mainstream box-office success.

On the surface, Three Billboards is not exactly an easy sell. When it came to pitching the script, McDonagh said, "I could not say that there were loads of people clamoring to do it, but all you need is one." Even its location – rural Missouri – would raise a few eyebrows. McDonagh joked that he picked the Show Me State because he liked the sound of a three-syllable name in the title, but there's a deeper legacy at play. He needed one of the true battleground states of the Civil War, "because of the underlying racist issues, and somewhere a little off the beaten track." However, even with a list of what could have been fatal strikes against his newest script, In Bruges had done enough to establish his reputation as a filmmaker with producers. With its tonal kinship to Three Billboards, he said, "They knew what they were going to get."

While his first film opened doors in Hollywood, Three Billboards reaches back to the themes of his earlier stage work: the complicated burdens of co-dependency in Beauty Queen, and questions of guilt from 2003's The Pillowman. There are also reflections of his most recent play, 2015's Hangmen, which transfers from London to New York in January: Set in the wake of the UK's elimination of the death penalty, its focus is a portmanteau character based on Britain's last executioners. Yet he is really the lens through which McDonagh shines a light on vengeance, contrition, and justice, and the way the answers to those questions shift with time and perspective – all issues broached in his new film.

At the core of Three Billboards' moral maelstrom is McDormand as Mildred, howling at a cruel universe: Yet McDonagh wrote her as a figure for whom the audience's sympathy is mottled by the flailing nature of her grief-fueled vengeance. "Once we got together, our determination was to not make her any more likable than she was on the page." McDormand embraced her flaws, her abrasiveness, and destructiveness: However, both the writer and the actress were confident that these traits would not alienate the viewer, but merely deepen their connection to this complicated woman. McDonagh said, "Fran's humanity will come out if we give the room for the pain and the grief to come out, but we have to make clear how tough this woman is."

Yet she could not be the only character of complexity and nuance. When it came to Willoughby, who Mildred initially portrays as the villain of her own story, McDonagh said, "We needed someone who was Frances' adversary, but you're still on his side as well." That's when he turned to Harrelson, who he had known for over a decade, and first worked with when he cast him as explosive mob boss Charlie Costello in Seven Psychopaths. "As much as he can play the tough guy or psycho very well, there's an immense well of decency in him as a man that comes through in all his arts." He paused. "Not in Natural Born Killers."

Harrelson is not the only recurring performer here. Returning to the fold are his Seven Psychopaths co-stars Abbie Cornish, Željko Ivanek (who was also in both In Bruges and the Broadway production of The Pillowman), and Sam Rockwell, who starred in McDonagh's first America-set play, 2010's A Behanding in Spokane. Like his Behanding character, lunkheaded hotel receptionist Mervyn, Rockwell's role as dim-witted beat cop Dixon is filled with unlikable habits: He's lazily racist, foolishly unobservant, and timidly subservient to his bullying/enabling mother (Sandy Martin). When looking for his Dixon, McDonagh said he avoided "actors who would be overly lovable, or tone down the racist aspects from the start." That's why he turned to Rockwell. "He doesn't do the obvious, the Marvel stuff. He did Iron Man 2, but even then he was quirky and himself."

For all three characters, McDonagh rejects the idea of purity of intent, in favor of something more real, something more relatable, and something that audiences will feel resonate in their own lives. He said, "What I would hope that people would take away is what I take away, and what bubbled through in the edit, is the hope of these people, and the possibility of change. We're very truthful about the pain and the rage that Mildred is going through, and what people in the country are going through. We're not sugar-coating it, but we are hopeful that people can change if we see a little of the humanity in each other."

A version of this article appeared in print on November 17, 2017 with the headline: Signs of the Times