A Game for Every Weirdo at Fantastic Arcade

Supposedly there are two types of people in the world: those who play video games and those who don't. At Fantastic Arcade that latter group is better defined as those who haven't found the right game yet. The annual event – that broke away from its sibling Fantastic Fest this year – celebrates all things weird, niche, and avant-garde again with more than 40 games that cater to all shades of art lovers.

Tickets for the talks and tournaments are sold out, but the free-to-play games will be available to the public in the Barrel O' Fun lounge all weekend. Do you want to take control of a webbed-foot troublemaker? Try Untitled Goose Game. Want to prevent a gunshot aimed toward the heart of creation? Genesis Noir is for you. Perhaps consoling loved ones while keeping a funeral home solvent is more your speed. A Mortician's Tale will be a good fit. And Disco Bear is pretty much what it sounds like. Other characters include a clumsy robot, a meticulous warehouse steward, a man stuck in a cauldron, and many more.

In addition to all those are six games commissioned specifically for the festival and retrofitted into custom arcade cabinets. We asked a handful of these spotlight developers to describe their creations.

Fernando Ramallo: "It involves a character named Mario that jumps around and also the American health care system."

Conor McCann: "The art style is fairly minimal with a Bauhaus influence. ... Basically you just need to get from A to B, but your player is constantly going in a circle to the right."

That's just a smattering of the strangeness headed to town, so if none of the aforementioned works strike a chord in your heart and mind, there's still hope. Come out and find a game that fits your unique brand of weirdness. 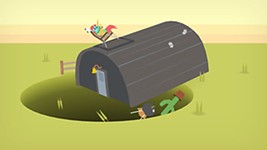 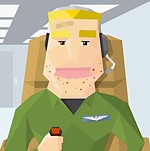 Whipping Gamers Into a Frenzy
A Taste of the Fantastic Arcade