Lou Diamond Phillips. Keenen Ivory Wayans. David Fucking Simon. Okay, that last one wasn't actually three names, but you get the idea. The Austin Film Festival is here, starting Thursday, Oct. 26, and they have curated one of the best lineups in their 24-year run. Besides bringing in some the smartest and most diverse creatives in the industry, AFF has dropped a lineup of stellar premieres, repertory screenings, and top-notch panels that celebrate the big and the small screen. Noah Hawley? Check. Kenneth Lonergan? Check. Major fall film releases like Three Billboards Outside Ebbing, Missouri? Checkmate. We've pointed out a few highlights, but this is only scratching the very deep surface. One of the most accessible festivals in Austin, this year's AFF is a must for any pop-culture/film/TV/life aficionado.

A Conversation With Mark Frost

Sat., Oct., 28, 9am, St. David's Episcopal Church: Bethell Hall
Twin Peaks is arguably one of the (read: the) most influential TV shows of the Nineties, and Showtime's season 3 run this year upped the ante to such a degree that one wonders what ripple effect may occur over the next generation of episodic television. The number of burning questions you have for co-creator Mark Frost might send this panel over the time limit, but this is an opportunity that comes once in a lifetime. Gotta light?

A Conversation With Scott Frank

Sat., Oct. 28, 2:45pm, InterContinental Stephen F. Austin: Ballroom
A master of dialogue and pacing, screenwriter Frank is a writer whose career is notable for his versatility and genuine love of cinema. Out of Sight remains my personal favorite, but the notches on his belt are formidable: Get Shorty, Minority Report, and Logan are just the cherry-picked highlights for this multihyphenate talent who made the world weep with Marley & Me. Ask him why he didn't change the ending.

Sat., Oct. 28, 4:30pm, Driskill Hotel: Ballroom
Guinevere Turner's pedigree goes back to her debut feature as a writer and actress: the influential 1994 film Go Fish. Her collaboration with Mary Harron on American Psycho (and if you're familiar with that Bret Easton Ellis novel, you know how much of a chore that was) is the focus here, but I'll bet there may be some time to discuss her screenplay credit for the 2005 film BloodRayne.

Thu., Oct., 26, 2:45pm, InterContinental Stephen F. Austin: Ballroom
Screenwriter James V. Hart's dissection of story and themes of the best film from last year (yeah, I said it) will delve into the ins and outs of character development, loves and desires of the main characters, and how to create a (somewhat) successful resolution, and how a white guy saved the genre of jazz. This airing of Hart's famous "HartChart" will feature a live-streaming interview with director Damien Chazelle.

Thu., Nov. 2, 5:30pm, Paramount
The story of Tonya Harding, a figure skater who became embroiled in the infamous incident involving Nancy Kerrigan prior to the 1994 Winter Olympics, is documented here, but that chapter is merely one of many in this multifaceted tale of a woman growing, reaching, and defying pretty much everyone around her to become the person she is: herself.

The 24th annual Austin Film Festival runs Thursday, Oct. 26, through Thursday, Nov. 2, at various venues. Producer Badges begin at $675, but there are many options, including a $75 film pass, and individual screenings and panels will have tickets available if there is seating available. See www.austinfilmfestival.com for the full schedule and ticket info. 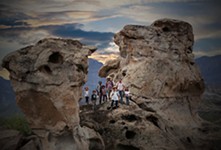