Local Webseries Highlights the Strengths and Struggles of Women of Color

We Are tells seven tales with Austin as their backdrop 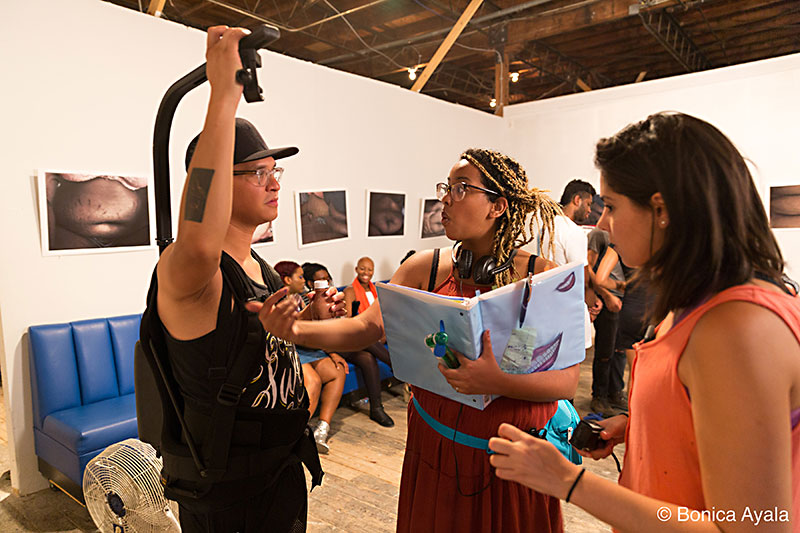 (l-r) E.J. Enríquez, B.B. Araya, and Jessica Vasami on the set of We Are (Photo by Bonica Ayala)

The late September premiere of local director B.B. Araya's self-assured and markedly entertaining narrative short film series, We Are, presented positively tangled emotions for many in attendance that evening at the North Door. To begin with, that the upstart series of mostly women of color exists, and has gained significant fanfare coming out of Austin, is a small wonder and a welcome sight.

We Are features seven women of color, including black and Latinx, in exceedingly human, nuanced look-ins into their various stages of existence and emotional development, with Austin as the backdrop. There are crises of artistic confidence, true-to-life bouts with self-doubt, and vulnerability within an assortment of relationships.

The viewer can see these women coping with change and living authentically, in ways not typically appreciated – or acknowledged – in the mainstream.

The six-part series eschews stereotype, while also side-stepping the well-trodden trappings of comedic bluster and the "huge dramatic situation," as filmmaker Araya refers to it. Gone is forcefulness of nailing the joke for the sake of it, without first grounding the humor into a particular truth.

"Throughout history, if you see a black or brown woman on the screen, they are usually dealing with life-or-death types of situations, but some of us are more fortunate in that our struggles are internal," says the Dallas native. "We have mental health issues, and we have angst about our artistry and things of that nature, so we wanted to highlight the struggles, the little mundane things that happen every day."

Scheduling was the initial challenge for Araya and the series' producers, Tamar Price (full disclosure: The Austin Chronicle's digital coordinator) and Jessica Vasami (Rooster Teeth Productions). The women used vacation hours from their day jobs to finish production. The three, and cinematographer E.J. Enríquez, planned months ahead, working around the actors' schedules.

"We have different strengths, and we were doing a lot of meetings, just trying to make sure that things were going to go smoothly because we knew the pace at which we had to move," says Araya. "We shot over 40 pages in five days."

East Austin haunts and various Austin-based musical acts, including pop/soul artist Mobley and rap outfit Magna Carda, are heavily featured. Araya says the cast co-wrote much of the series, which lent significantly to the authenticity and furthered encouragement toward artistic leaps.

"We're here to take risks," she says. "We're making art. This isn't rocket science; we're not operating on people. We're just messing around with art, and I wanted everyone to feel that they could take risks and we could mess up, but ultimately we were just trying to tell the truth."

The YouTube channel of HBO's Insecure co-creator and lead actor Issa Rae picked up the series for broadcast on Sundays. For Araya, the visibility within and outside of Austin is her primary goal.

"I think success for this series is just getting eyes on it and show people, 'We're here, we made this, and we're out here creating, and we have a lot more to give.' I want it to resonate with folks and make them feel less alone."

We Are episodes are released every Sunday. Check out www.youtube.com/issarae to watch them.

A version of this article appeared in print on October 6, 2017 with the headline: We Are Austin