There's Something in the Woods 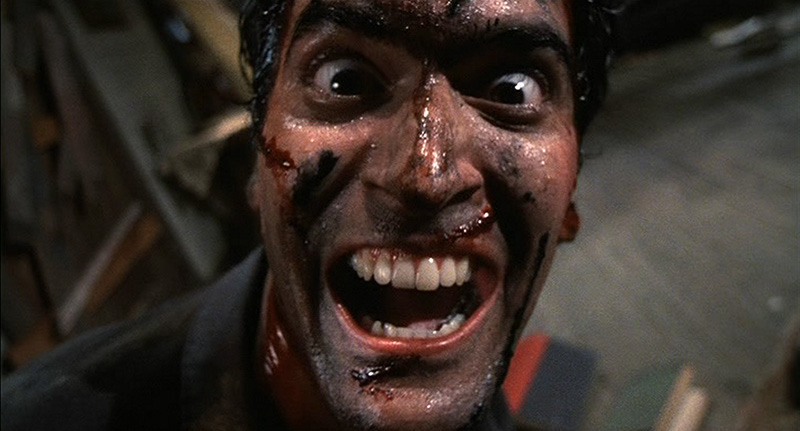 Q: Could there be anything groovier than watching Bruce "The Chin" Campbell's hapless alter ego Ash chainsaw his way through hundreds of gallons of demon viscera in director Sam Raimi's deranged 1987 masterpiece Evil Dead 2: Dead by Dawn?

A: Yes, but only one thing, and that's watching Ashy Slashy bedevil the Necronomicon Ex Mortis while hanging out with Campbell in the woods, drinking beer, and almost certainly being devoured not by your undead girlfriend but by real-world, totally not-dead skeeters and other shaky-cam forest horrors. Unholy cinematic resurrection is one thing, but Lyme disease? Now that's just a bitch and a half. Luckily, a person's blood-alcohol level is rumored to deter entomological bloodsuckers from viewing your nether regions as viable dine-and-dash spots, so drink up, Shemp, and welcome to the Alamo Drafthouse's Rolling Roadshow, Evil Dead 2: In the Woods.

It's the Alamo's 20th anniversary this year, which makes the genre film destination's go-anywhere, do-anything, traveling offshoot roughly 15 years old. That, in turn, makes Raimi, Campbell, and producer Robert Tapert's 1978 proof-of-concept, proto-Evil Dead short "Within the Woods" somewhere near 40. Old enough to vote, to drink, and to dismember at will, you might say. Count us in, but please, no functional McCulloch 50cc stroke gas screamers at the event, even if in tribute to the recently fallen, forever fantastic 'Saw-God Tobe Hooper.

Alamo founder and CEO Tim League, circa 2002, on his new Rolling Roadshow screen – at the time used chiefly for free summertime classics in Downtown Austin's Republic Square Park: "This screen is absolutely perfect. It basically looks like a giant balloon-bounce Magic Castle thingee, and it inflates in less than 10 minutes. There's really no liability if all turns to hell and a tornado comes through during a screening. You'd just be hit on the head with a giant balloon!"

Which brings us to our Top 5 Rolling Roadshow screenings since the Stay Puft Marshmallow, liability-free, silver screen debuted:

2) The "Live Thermonuclear Flaming Death Race and Demolition Derby" with The Road Warrior at Kyle's Central Texas Speedway. The same mysterious Chronicle staffer gets too close to the demolition part and ends up bleeding from burned rubber and sprayed gravel all night. His (or hers) Canon 7DF takes a beating as well.

1) Marcus Nispel's 2003 Texas Chainsaw remake paired with Peter Jackson's The Frighteners at the abandoned "Travis State School for the Criminally Insane" outside of Austin. Yet another unidentified Chronicle staffer reports "stumbling into a filth-encrusted indoor swimming pool splattered with what appeared to be a thick coating of blood." Also of note, "a snozzled and leering R. Lee Ermey lasciviously [autographed] a female fan's exposed breast behind the stage after the show ... beyond creepy."