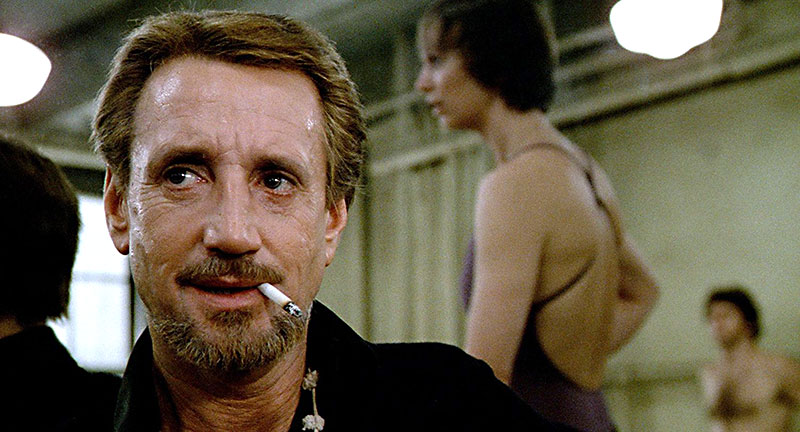 Bob Fosse was barely a teenager when he first started performing at grimy burlesque halls around Chicago, where he got an early education from the strippers he met backstage. That experience would ignite parallel obsessions – sex and show business – that steered not just his wildly successful career and cocksmanship but also the dark musicals he brought to the screen.

Already an acclaimed Broadway director and choreographer, Fosse transitioned to film with his 1969 adaptation of Sweet Charity, a musical about the dashed romantic hopes of Charity Hope Valentine, a down-at-the-heels dance hall girl (upgraded from "prostitute" in the source material, Fellini's Nights of Cabiria). Fosse's wife Gwen Verdon – a legend in her own right – won a Tony for playing Charity on Broadway, but she was replaced in the film by Shirley MacLaine, a much bigger star. Verdon was charitable about being passed over, which would become a pattern. When Fosse shot his next film, Cabaret, on location, she flew back and forth to Berlin to provide support, even as Fosse was carrying on an affair in plain sight.

Adapted from the Kander and Ebb musical and based on Christopher Isherwood's recollections of Weimar-era Germany, Fosse's Cabaret (1972) is still a stunner. Liza Minnelli stars as Sally Bowles, a broke cabaret singer not above lying down if she sniffs there might be upward mobility in return. But her relationship with Michael York's British expat Brian, which evolves from tender friends to surprise lovers (even as Brian and Sally both suspect he's gay), is something purer. The giddiness of their early days together mirrors the Weimar Republic's life-is-a-party last gasps. When the crash comes – hinted throughout in shocks of Nazi rhetoric and violence – it's devastating. Among the film's eight Academy Awards were Fosse's win for Best Direction (beating Francis Ford Coppola for The Godfather), Minnelli for Best Actress, and Joel Grey, as the ghoulish emcee of the Kit Kat Club, for Best Supporting Actor.

The same year, Fosse was also awarded an Emmy (for directing Minnelli's concert film Liza With a Z) and two Tonys (for directing and choreographing the Broadway hit Pippin). Shortly afterward, he checked himself into a psychiatric hospital for acute depression; a heart attack soon followed. It was all fodder for his last screen musical, the intensely autobiographical and deliciously delirious All That Jazz (1979). Roy Scheider plays Fosse's stand-in, Joe Gideon, a Broadway choreographer juggling women, work, multiple addictions, and several cardiac arrests. Staring down death, he hallucinates his own ecstatic funeral, a song-and-dance extravaganza. It was a dress rehearsal of sorts: When Fosse suffered another heart attack in 1987 – fatal this time, and with Verdon beside him – his friends gathered at Tavern on the Green for a Champagne wake, on Fosse's dime. (He set aside $25,000 in his will for the occasion.) The party ended – where else? – on the dance floor.

The Dark Musicals of Bob Fosse