David Lowery on His Haunting New Film A Ghost Story 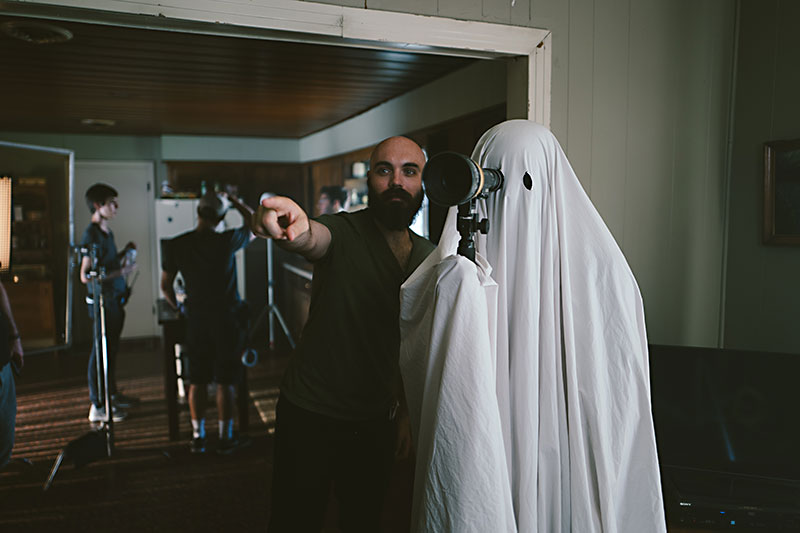 David Lowery (l) with Casey Affleck (Courtesy of A24 Films)

In one of the most bizarre and inspired films of the year, a ghost called C (Casey Affleck, wearing the standard white sheet of the recently departed) mournfully stands guard as his former home is demolished by corporate bulldozers.

This is A Ghost Story, another hyper-expressive experiment in visual storytelling and evocation of place from Texas filmmaker David Lowery. Those familiar with Lowery's previous features – the Dickens-by-way-of-Bujalski homelessness drama St. Nick (2009); Ain't Them Bodies Saints (2013), also starring Affleck and his partner in A Ghost Story, Rooney Mara; and last year's gorgeous Pete's Dragon – will recognize in the new movie his folklorist's touch, and the sense that you have been thrust into someone's private memories.

Yet even the most ardent fans of Lowery and his filmmaker partners in Sailor Bear, Toby Halbrooks and James M. Johnston, may be surprised by elements of magical realism and quantum mechanics that turn this gem of a feature into a smoothie of Apichatpong Weerasethakul, Shane Carruth, and Lucrecia Martel, among others.

Lowery’s breathtaking, labyrinthine script posits his/its journey as a concrete physical (rather than metaphysical) possibility, at least for the recently deceased.

Gregarious in conversation despite months of work on his upcoming feature, The Old Man and the Gun, Lowery admits, "I am a very practical person, and I don't like to get too tied down to the supernatural, in spite of the fact that this is a movie about a ghost. But I do believe that there is some sort of energy that makes you fit into a space." A Ghost Story is set primarily within such a space: a warm house in the Dallas suburbs, designed by Jade Healy and Tom Walker to look as lightly wooded and lived-in as an old bookstore.

In a performance of typical delicacy and seemingly ancient wisdom, Mara plays M, C's wife and the party responsible for identifying his corpse after a sudden accident. She does so, leaves the hospital, and fails to return in time to watch as C, fresh off the gurney, stands up and walks – or rather, drifts – back to their home. For the next hour or so of cinema-time, we transcend human life as C becomes corporeally unanchored, though he/it is still able to play the piano or carry a glass of milk while haunting his former domicile.

Paramount to our understanding of C's doleful behavior in the afterlife, says the filmmaker, was finding the perfect house: "You can either feel out of sorts and out of place, or you can feel like you belong somewhere. Whether or not that feeling is entirely contained within our subconscious, or whether we are actually picking up on vibes around us, I don't know. But I definitely find it in the places I live." For Lowery, that sensation undergirds his daily life. He and his wife, the actor and filmmaker Augustine Frizzell, are currently searching for a new home using a single criterion: "Does this feel right for us?"

A Ghost Story is not a classic "home is where the heart is" relationship drama, however, unless you thought Blue Valentine lacked direct allusions to Isabel Allende. Upon his passing, C – and by extension Affleck, who gamely performed Finisterrae-style while wearing multiple petticoats and a helmet under the sheet – experiences otherworldly jumps in space-time that prevent any traditional method of communication between him and M. Lowery describes this process as C becoming "unstuck in time," a phrase "stolen from Kurt Vonnegut entirely because it means so much to me."

Nor is C's interdimensional journey strictly "time-travel; it's not H.G. Wells, it is a completely different concept." Lowery's breathtaking, labyrinthine script posits his/its journey as a concrete physical (rather than metaphysical) possibility, at least for the recently deceased. "Being able to exist outside of time in the linear sense," Lowery argues, "is a practical one on the quantum level in the real world ... although I don't know if any human will actually ever achieve that."

To convincingly stage this multitiered alt-reality within the budgetary confines of his self-produced (with Johnston, Halbrooks, and Adam Donaghey), self-financed indie, Lowery turned to tried-and-true compatriots.

In addition to Mara and Affleck (who also stars with Robert Redford in The Old Man and the Gun), Lowery peppered the cast with a stable of previous collaborators, including character actor extraordinaire Jonny Mars, Frizzell, and Will "Bonnie 'Prince' Billy" Oldham, who Lowery worked with on the short "Pioneer" (Oldham starred) and Pete's Dragon (as a musician). Daniel Hart, who has scored all of the filmmaker's features, again provides lush synth melodies, this time with an important assist from Kesha.

The director also asked Carruth, the Dallas-based auteur behind Primer and Upstream Color (which Lowery edited), for editing help; Carruth's impact, he says, was immediately "pronounced": "I was being very rigid in my approach, thinking that this was a movie that could not have flashbacks in it, and it couldn't play with time in the edit because the story was already doing that. [Shane] freed me up from thinking that way, and pointed the way with which we could mess around with time."

With Carruth's input, A Ghost Story evolved from a "rushing river" of a movie into "a series of lakes interconnected by rushing streams," Lowery laughs. The final product is an indescribable combination of "long, placid, still sequences" with the enveloping visual magnificence of Béla Tarr (largely thanks to Andrew Droz Palermo's cinematography) and the melancholic Western lyricism of Blaze Foley. It is – let's call a spade a spade – an ectoplasmic demonstration of genius filmmaking.

That it will equally fascinate word-of-mouth-driven newcomers and Lowery's growing fan base is not lost on A24, who cleverly picked the project up after its Sundance premiere in January. But the rewards are perhaps greatest for Lowery, whose swift rise from indie underdog to cinematic event-maker is fused inextricably to a profound personal investment in his stories. "Consciously or not, I find myself falling back into the same rhythms, the same ideas, and the same themes. Maybe there is some value in digging into the same things repeatedly."

A version of this article appeared in print on July 14, 2017 with the headline: A Spirit Unstuck in Time 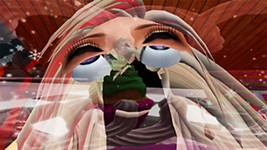