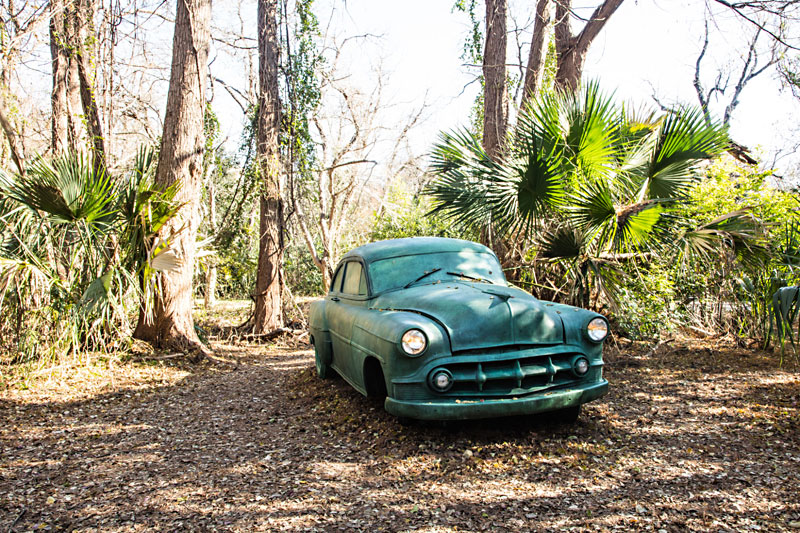 Snotty hippies in a souped-up '55 Chevy. A vicious 18-wheeler hellbent on running yuppies off the road. Steve McQueen in a desperate rush for the border.

Every Friday night this month, beginning July 7 with Two-Lane Blacktop and concluding with the revisionist caper comedy Thelma & Louise, the Contemporary Austin screens classic on-the-road flicks at the Laguna Gloria Amphitheater as part of its annual Green Screen Film Series. Andrea Mellard, the director of public programs and community engagement, who has programmed the series three summers running, has designed the weekly event so that each film (the other two being Duel, Steven Spielberg's first feature, and 1972's The Getaway) pairs organically with Road Angel, a mixed-media sculpture by the renowned polymath, and now, cinematic sommelier, Terry Allen.

"Road Angel gives you a way to think about the films," Mellard observes, by tapping into "that American impulse to drive from one coast to another on the open road." Allen's enthralling installation, currently staged in the Betty and Edward Marcus Sculpture Park, is an audiovisual rendering of nostalgia, Americana, and Manifest Destiny: a bronze cast of a 1953 Chevrolet coupe – "the actual car that Terry learned to drive in" – that randomly broadcasts recordings from its car radio.

Attendees are invited to visit the sculpture and to acclimate to the sounds of the lagoon before settling into the (outdoor) amphitheatre for the screenings, which typically begin at sundown. For Mellard and Allen, the series is intended to both bring attention to Road Angel and to evoke "that classic and, maybe, retro experience of going through the summer drive-in double feature where you're watching a movie in your car."

The features that the programmers culled from the artist's original list of films "about road trips and people on the lam" are, in a word, inspired, despite their infuriating omission of The Fast and the Furious: Tokyo Drift. Monte Hellman's minimalist racing masterpiece, Two-Lane Blacktop, is the visual opposite of the subsequent week's Duel, a frantic and violent made-for-television thriller regarded by Spielberg fans as "Jaws with cars." That contrapuntal rhythm extends to The Getaway, a ramshackle and horrifying Sam Peckinpah vehicle (pun intended); and the concluding screening of Thelma & Louise, Callie Khouri and Ridley Scott's still-peerless landmark in feminist crime.

While Mellard acknowledges the possibility of interruption – "rain is my enemy," she laughs – The Contemporary Austin has chosen (admirably) to embrace such a chaotic environment if it "enriches the context" of Road Angel and creates "a communal, social experience": "There may be disruptions from cicadas or bullfrogs, but there can also be this great magic when you are watching an outdoor scene in a film while hearing the sounds of nature on the soundtrack. It almost adds this fourth dimension."