Ana Lily Amirpour on Her New Film The Bad Batch

Writer/director Ana Lily Amirpour, whose first feature was the 2014 Iranian vampire, spaghetti Western A Girl Walks Home Alone at Night, comes on pretty strong, both as an artist and as a personality – in a good way. She has as clear a vision as you are likely to find among genre filmmakers today, and an idiosyncratic recall of the films that form her canon. Her new film, The Bad Batch, which plays like a perverse comedy, side-mirror reflection of Mad Max: Fury Road, is set in a social-Darwinist desert prison camp in a future (maybe not so far in the future) dystopian America. I talked to Amirpour by phone at the end of a long round of press interviews.

The Austin Chronicle: I loved the movie. I was talking to someone who hadn't seen it and I said, "I laughed all the way through it." He was surprised and said, "wait – it's a comedy?" It's not exactly a comedy, but like a lot of my favorite films, it is funny and joyous. What are your thoughts about this mix?

Ana Lily Amirpour: I think, in general, a sense of humor is one of the greatest survival tools in life, and probably the best way you can do a good job at being a human being. I love movies that kind of always have some of that somewhere. I feel like we've been in the era of shit taking itself too seriously for awhile. Remember Tim Burton's Batman? How much humor there was? And now, superhero films are so gritty and stressful. It's pretty heavy shit. But, still, I've found people who didn't find The Bad Batch funny, so I think it says more about you, the viewer, than anything else.

AC: When you picture the ideal audience for The Bad Batch, who is in it?

ALA: I would never hope to guess who, because the delightful thing is you just never know. My mom and dad, they're older and they really got the film. They loved it and got it in spades. From the very beginning. They were in Venice when they saw it, and 30 people walked out of it because of the violent opening. So it depends.

AC: The Bad Batch is nothing at all like it, but that mix of comedy and extreme violence reminded me of watching Pulp Fiction in the theatre when it first came out. It was the same kind of feeling. The mix between really assured action direction and it being a perverse comedy, and having extreme violence – it becomes funny the way that we react to that violence. That is a big part of the reason the movie is good.

ALA: I think part of the reason is Tarantino kind of stays with things all the way through. Normally in a cop or gangster movie, they shoot the guy and you're onto the next part of the story, but in Pulp Fiction you see these guys take this hostage and they have a conversation in the car. So there's something so funny about that, and then they blow his head off and they still don't leave. You're just in it. I'm totally with that. Don't let people off the hook. There are so many times in a movie when there are like huge explosions, buildings burning. If you really thought about the buildings exploding in movies that you see that's thousands and thousands of people dying. It's crazy. Do you remember in [Richard] Donner's Superman, the fight scene in Times Square?

ALA: God, it was so good. Every single thing, like when a car fell onto some lady; human life had a bit of value then.

AC: I think this is a good example of the pool of influences that you pull from, in a really serious and effective way. It's funny, in your Film Comment interview, the writer is trying to get you to talk about Sergio Leone and you keep pushing the conversation to movies like Romancing the Stone. That's got to be the first time an auteur has talked about that as an influence in Film Comment.

ALA: Is that true? Oh, wow. Amazing. I don't really read Film Comment.

ALA: That could be the headline of this whole piece: "Ana Lily Amirpour Doesn't Read Film Comment."

AC: But seriously, when you told them Romancing the Stone was a huge influence on The Bad Batch what did you mean by that?

ALA: It was one of the references – not visually – but obviously El Topo, especially the first hour of El Topo was one of the films I was interested in. I feel like Wild at Heart is always something I think about when I'm writing, at least my first two films. Romancing the Stone comes into it because there's this guy and this girl. I think maybe Jason Momoa's character Miami Man is like Kathleen Turner and Suki Waterhouse's character Arlen is Michael Douglas. I don't think it's really on the nose, but just the idea that they're out here in this wild area, in a foreign country, and they're on this quest, and one thing after another comes up.

AC: And along the way it's a love story that's also about making a friend.

ALA: Friendship! It's not like Dirty Dancing or something. Which was also something I referenced. It's really not a love story. It's an adventure quest movie. They're like hunting for treasure and shit, and she needs her sister to get saved. So there are multiple agendas and along the way something starts to happen between them. It's also really funny because Kathleen Turner's a romance novelist and Michael Douglas is turning the lights on her superficial, elevator-pitch image of love. I love that movie. I love Bobby Zemeckis. What a gift to movies. He's my Orson Welles. I really feel that way. I look at his movies as great masterworks. They didn't always please the masses, but they were always surprising. He was always doing something before other people were. Forrest Gump: people want to hate on it, but he did shit nobody else did with VFX. Who Framed Roger Rabbit?! Come on, man!

AC: When you were last in Austin, talking to the folks at AFS, you responded to a filmmaker's question about maintaining a film career with a really interesting analogy. You said that a filmmaker has to be like Doc Brown from Back to the Future. He's not motivated by money or status. Is that where a filmmaker's head needs to be?

ALA: Yeah. I think there's a weird thing. That's absolutely true about Doc. And to add some complexity to it, I think Doc absolutely has to do what he does for his soul. What his soul wants is to make these things that he wants to exist in the world and, it's funny, you asking me who is the audience for my film is almost like asking me who should drive the DeLorean. It's an impossible question to answer. You can't say that. Once he makes [the time machine], it's there and some people could use it for this or that, or some people could get bored with it. You don't know. And some people will destroy the world. But the other thing to take into account is that inventing, in the meaning of what it is, being an inventor, requires someone with a need. So what he does and what I do and what filmmakers do, we need people to have a use for the thing we're making. Even though Doc is not hanging out with people and he's not doing it for them, he's doing it for himself, at the end he does want it to be something someone can use in some way. So I guess you just hope that there are people that can get on your freaky freakshow ride. Know what I mean? Or be forced on it and say, "that wasn't so bad."

AC: Suki Waterhouse is slight of build but she fills the screen with her star presence – and her great eyebrows. What is that star quality exactly, and how did you know she had it?

ALA: I totally feel the same way. I didn't even know who she was. She did some modeling before. My casting director sent me a lot of actresses on tape and I was watching these tapes, and when I watched hers, it was like time standing still. I was just holding my breath watching the character Arlen. She was just it. I tried to prepare her for it, and I even told her, "You can't even imagine how much you are going to physically suffer the next three or four months," because the prosthetics she had to wear were hot and painful and I'm pretty sure her neck got out of alignment. That takedown scene, where the woman takes her down, we did that four times and it was like a football tackle.

AC: She moves really well, too, which is something that some models turned actresses don't do well in a scene.

ALA: I love everything about her. She's the kind of actress that I felt like we had a wave of: so many exciting, diverse, different personalities for a while, like Marisa Tomei, Uma Thurman, Julia Roberts, and Cameron Diaz and they all looked different and they all had really distinct personalities. I don't know how many of those kinds of young actresses we have in movies today, so it was fun to put one that I like into that mix. I hope people put her in all their movies.

AC: I know that Jason Momoa was someone you wanted to work with from the beginning. He's really funny, in a deadpan way. What did you see in him that made you want to cast him?

ALA: He's so funny. I think he would love to do more comedy. When you meet him in person, he has an insanely awesome sense of humor and he's just like a big, playful guy. He's very good, obviously, at the savage tough guy thing, so it's cool for him to branch it into new directions.

AC: Jim Carrey is in the film, though you might miss him.

ALA: Yeah, my mom watched the whole movie and didn't even know it was him. I was like, "Mom, he was the hermit in the desert," and she was like, "that dirty guy?" Isn't that so great? To have someone so recognizable as Jim Carrey fully disappear into the character?

AC: He plays a really tremendous Chaplinesque pantomime scene that is terrific. It's just a bit, but it's so wonderful. I don't know who else could have done that scene.

ALA: Nobody. Nobody. And that's a testament to his emotional intelligence. To read a script like that and it's only a few scenes and no words, but recognizing how important that character is to the soul of that entire story. He is the human soul of this savage story so it had to be someone powerful.

A version of this article appeared in print on June 23, 2017 with the headline: Cannibals, Cult Leaders, and Friendship

Desolation Angel
Ana Lily Amirpour on the cult of cinema 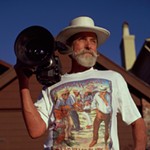