It's been a hellish shift at Sacred Heart Hospital for J.D. Dorian. On his first day as an intern, he's had a patient die on him, walked into a light, and found out that chief of medicine Dr. Kelso, whom he thought a cuddly old uncle, is a mean-spirited, check-cashing old bully who checks out completely at quitting time. "If he's the jerk," J.D. wonders, "then who's the good guy?"

Enter senior attending physician Dr. Perry Cox, as created with unreachable genius by John C. McGinley. A loudmouthed, arrogant, self-destructive lifesaver with the interpersonal skills of a bulldozer with a hangover, who makes wildly inappropriate comments about nurses, patients, fellow doctors, people who take too long to order a coffee, and of course J.D. To the chagrin of both men, they become teacher and mentor.

Medical sitcom Scrubs (available on Hulu) debuted Oct. 2, 2001, when America was reeling from the biggest terror attack in its history. For nonfans, it was a goofy addition to the wackier end of the genre, with nerdy semi-hero J.D. (Zach Braff) running through pratfalls, a will-they-or-won't-they romance with fellow doctor Elliot Reid (Sarah Chalke), deliberately awkward banter, and daydream sequences that became the show's trademark. The post-9/11 timing may seem inopportune, but in hindsight it was perfect. After all, this wasn't a comic riff on shows like ER, where heroic measures result in heroic, lifesaving plot lines. This was a show about death, and Cox knew it. He tells a shocked J.D. that their aging patients are only alive because of medical advances that pass beyond the miracle of science, and hit cruel and unnatural. Ignore the Gomers, he tells him. "Your job is to stay sane enough so that when someone does come in that you actually can help, you're not so brain-dead that you can't function."

It was about the middle of the show's run that a younger writer and close friend, Alasdair Stuart, started calling me the Perry to his J.D. After a little while and a little self-denial, I realized that was true. After all, any journalist finds themselves asking why they hang on in this insane industry, and it all comes down to one question: Am I a Kelso, or am I a Cox? The Cox path is the hardest. Under the Scotch-sipping, Detroit Red Wings-worshipping, daytime soap-distracted exterior, lies a man trying to hang on. In his achievements, he is insufferable, because he knows how good he has to be. But in his failures, he is inconsolable.

Sitcom historians will argue about the most heartbreaking death committed to script, and it will usually be Lt. Col. Henry Blake in M*A*S*H. But in Scrubs' season 5 gutpunch "My Lunch," J.D. and Cox run into a former patient at lunch and ignore her because she is incredibly annoying. She dies; the symptoms say overdose. And they use her donated organs to save an entire ward full of dying patients. It's a moment for celebration, even as J.D. worries that they should have looked out for their former patient's mood a little more.

His conscience is salved a little by even worse news. It wasn't an overdose. It was rabies, and the transplants are killing everyone they were supposed to save. Cox's meltdown after the last patient dies – taking his own advice from the pilot, he holds himself together just enough to try to help the ones he can – is heartrending, visceral, and real. He rips the room apart, and then takes it out on himself. He has absorbed better than anyone the arbitrary nature of life and death, and that's why he's such a great doctor, but it still hurts when the arbitrariness seems capricious. Yet he comes around, and keeps coming back, and waiting for the winnable fights. As bleak as the times seem for society in general, and journalists in particular, I'd rather be Dr. Cox, slouching with the Gomers until there's someone to be saved. 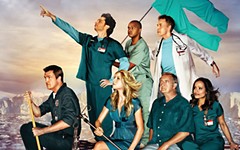 Laughs, Deaths, and Scrubs
Bill Lawrence on the serious side of his crazy hospital comedy