UT professor looks to jump from the lab to the marketplace 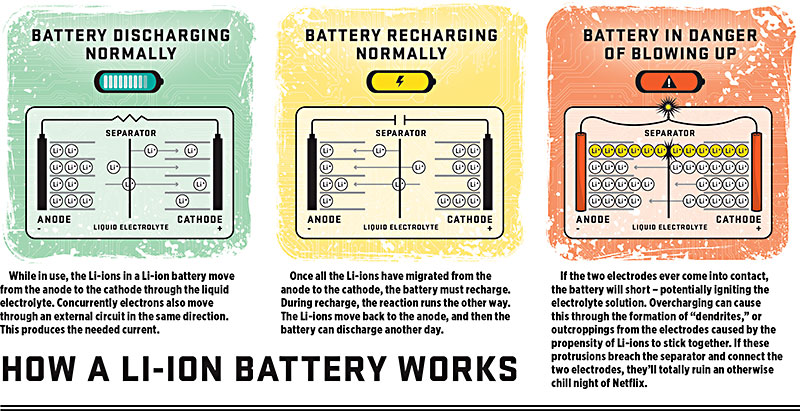 If you memed today, then that LOL was probably powered by what's called a lithium-ion (Li-ion) battery. Same if you coveted a Tesla, found your way around an unfamiliar city sans atlas, or avoided small talk on the bus by keeping your face firmly pointed at the aforementioned meme. Many, if not most, of the portable electronic devices – from electric cars to cell phones – use a Li-ion battery, co-invented in the late Seventies/early Eighties by Dr. John Goodenough, professor and Virginia H. Cockrell Centennial Chair at UT's Cockrell School of Engineering. That invention is one of many accolades that have earned him a list of science prizes, like the National Medal of Science awarded by President Barack Obama. His work helped enable the explosion of wireless electronic devices we so often take for granted. This year, he and his team have published on a new, potentially revolutionary technology: a faster-charging, more powerful, noncombustible, all solid-state battery that can work with either lithium or sodium. What does that mean? Soon you'll be able to LOL and covet Teslas while riding a hoverboard (that doesn't explode) through the streets of a world free of fossil fuels. Well, that's the long-term idea anyway.

Les Nichols, the program director of physical science licensing at UT's Office of Technology Commercialization, is working on licensing the researchers' recently patented discovery. He spoke to the new battery's functionality and how it differs from conventional ones. "A Li-ion battery is made of four basic components," he says, listing off the following: an anode, a cathode, an electrolyte solution, and a membrane separator that prevents shorts by keeping the anode and cathode out of physical contact. When a battery is in use, Li-ions in the electrolyte solution move from the anode to the cathode while electrons move through an external circuit. This produces the current that can power a cell phone or motor. When all the Li-ions have migrated to the cathode, the battery must recharge. That drives the reaction the other way, returning the Li-ions to the anode.

If the battery can make the jump from the lab to the marketplace, it could mean cars that don’t need to charge all night, small devices that don’t explode on planes, fewer expired batteries stacking up over time, and batteries powerful enough to decrease reliance on fossil fuels.

The researchers' new discovery is a solid-state, Li-ion battery. "Solid state means no liquid electrolyte," says Nichols. "That prevents one of the major challenges you have with Li-ion batteries: The Li-ions tend to build up on the anode and on the cathode as the transfer goes back and forth in the cycle of the battery as it charges/discharges multiple times," he says. "As they build up, they create what are called 'dendrites,' which are just pointy, outreaching arms of lithium that could possibly cross the membrane barrier and make a connection between the anode and cathode, therefore causing a short-circuit and high heat." Liquid electrolytes are usually organic solvents, which are flammable. Thus a short circuit can cause combustion. In a liquid-electrolyte battery, dendrites can simply build up over time. Attempting to charge a cell too quickly can also cause them. "A solid electrolyte would block that buildup," says Nichols. The result is a safer, noncombustible battery with multiple performance and potential manufacturing improvements. Dr. Maria Helena Braga, now a principal researcher on Goodenough's team, laid the groundwork for its development as an assistant professor in the Department of Engineering Physics at the University of Porto in Portugal. She's been collaborating on the battery as a researcher at UT for the past two years.

The team published a paper on their work in the journal Energy & Environmental Science early this year. In it, they support their claims that the new battery can safely charge in minutes, rather than hours, and can perform more than 1,200 charge cycles without degradation. That means the battery itself lasts longer. (The types of Li-ion batteries in products today usually get 500-1,000 cycles before they can no longer recharge properly and charging such a battery that fast would likely fry it due to dendrites.) Their prototypes also have at least three times the energy density of today's Li-ion batteries, which means longer charges and improved driving ranges for electric cars, and they can function at -20° Celsius. An added plus: They work when made with sodium rather than lithium. That could introduce new low-cost, green manufacturing options since "sodium can be easily accessed from sea water," says Nichols.

If the battery can make the jump from the lab to the marketplace, it could mean cars that don't need to charge all night, small devices that don't explode on planes, fewer expired batteries stacking up over time, and batteries powerful enough to decrease reliance on fossil fuels. "We're a society extremely dependent on electrical energy from the grid. That electrical energy is powered by fossil fuels," says Nichols. "There's a little bit of solar and wind growing all the time. But what happens when the wind isn't blowing in West Texas? You don't get that much power," he says. "What if you had large-scale storage batteries capable of storing that power?" And that's what Dr. Braga is most excited about when it comes to applications of her work. She's an avid reader and hopes the batteries can "make it possible for someone in a faraway place, with no access to the grid, to store energy with solar panels during the day" so that at night they can "use the battery for studying."

While this all sounds very promising, there is work to do before we'll see such batteries in common use. For one, this battery isn't the first solid-state option proposed. So far, transitioning from the lab to the marketplace has proven difficult for predecessors. The researchers hope early collaboration with industry could help this battery make that jump. "We get early-stage inventions presented," says Nichols, of his science commercialization office. "But we have no idea really, or a very limited idea, on whether they could ever be manufactured on a commercial scale. In this case, we are getting a lot of insight because we have so much outside company interest."

A version of this article appeared in print on April 21, 2017 with the headline: A Salt in Battery