The Son Rises With Philipp Meyer

Austin author on adapting his award-winning novel for AMC 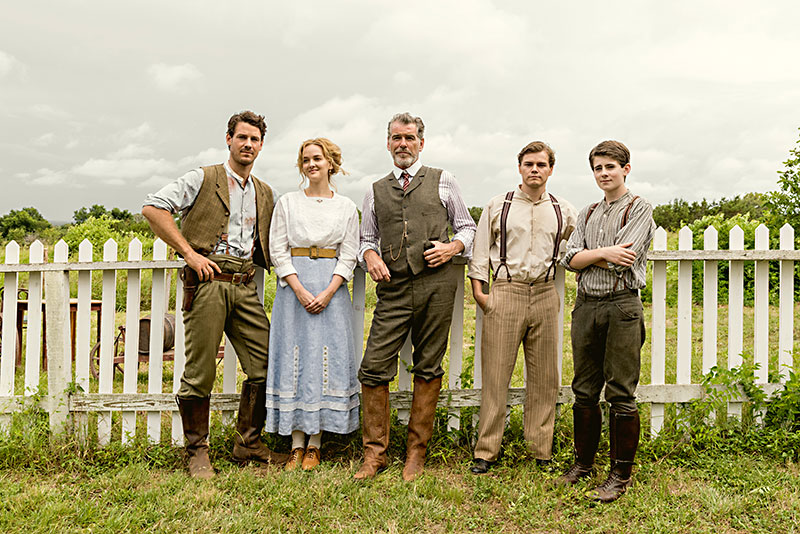 Philipp Meyer was getting drunk on author and folklorist J. Frank Dobie's front porch when he decided to adapt his epic Texas novel The Son for the screen.

"Let's just do it ourselves," he recalls thinking, with the "ourselves" including his compadres Brian McGreevy and Lee Shipman from the University of Texas' Michener Center for Writers. "The worst that can happen is we fail."

They didn't. The Son begins a 10-episode run April 8 on AMC. Meyer figures the series is about 50% his Pulitzer-finalist novel and 50% new material. Like the book, it focuses on three McCulloughs: Eli (Pierce Brosnan), whose family is killed by Comanches and who spends three years with the tribe before adventures in the Civil War, cattle, and oil; his son Pete (Henry Garrett), who questions the morality of his father's decisions; and Jeannie (Sydney Lucas), who fights through the assigned female roles of her era to find her own power. In the novel, she was Pete's granddaughter; in the series she is his daughter. It's the sort of streamlining Meyer and crew had to make for the adaptation, including sticking to only two distinct time frames.

Set in South Texas, the show was shot in and around Austin. The look is pure Hill Country bliss. Meyer remembers the moment it clicked: Pierce Brosnan as the grown Eli has come across a man swinging on a noose from a tree. Pete decides to cut him down. Eli and Jeannie walk into a field of wildflowers and talk. "It's a stunningly beautiful scene that was written sparsely," Meyer says. "The chemistry between the two actors is so incredible. You believe they are family. This scene is art. What's written on the page isn't art: Eureka. I got it. This is my role. It's all a setup for these actual artists to do the work."

Arriving at that moment required an odd mix of luck and hard work. Raised in Hampden, a working-class Baltimore neighborhood, Meyer dropped out of high school, got his GED and worked as a bicycle mechanic. While taking a college freshman composition course at Loyola College in Baltimore, he churned out writing assignment after writing assignment and saw his future. "I knew this is who I am. It never was a conscious decision," he says. "It was always there. But the question was, 'How do I eat?' I didn't know you could make a living at it." Instead he graduated from Cornell University and worked on Wall Street. He kept writing and came to despise his job. So he quit, moved into his parents' basement, remodeled houses, drove an ambulance, and wrote. "I remember being very depressed," he says. "I thought I'd failed."

Acceptance to the Michener program – three years of fully funded time to write – changed everything. "I thought Texas was a crazy place full of cowboys," he says. "I fell in love with the state in a couple of months." He used the time to pen the bulk of his debut novel American Rust, about the American Dream gone wrong in a Pennsylvania steel town. The novel was optioned for film, a screenplay assigned to be written by someone else, but the project never came to fruition. Meyer was never consulted. Which brings us back to the porch of Dobie's farmhouse near Dripping Springs, an idyllic spot set aside for winners of the Dobie Paisano Fellowship to think and write (and these days ignore the encroaching nearby development). The Hollywood maxim is the writer doesn't matter once the wheels of a project begin to turn. Instead, Meyer, McGreevy, and Shipman get "created by" and "executive producer" credit on The Son. "It's been surreal and such a long journey," says Meyer, who got down in the dirt and sweat with the cast during filming.

Meyer helped the actors learn how to shoot with a Comanche bow and how to speak the tribal language. Brosnan was already able with firearms (he was James Bond, after all), but Henry Garrett arrived early for gun training. Meyer drove Garrett all over Texas, visiting ranches and showing him what it meant to be a cattleman. Garrett rode horses every day. "Henry's a method guy," Meyer says.

The same could be said for Meyer. "I grew up in the city," he says. "When people like me see a natural area they basically see a massive green landscape. Any pre-industrial person saw a collection of hundreds of identifiable plants and animals." He read more than 350 books of nonfiction and conducted myriad interviews as research for the novel. Meyer learned to build a fire with sticks and friction and succeeded – once. "All our ancestors across the world mastered it so they could stay alive," he says. "It took me a week to do it."

There's a small scene in the novel where a famed writer from up north arrives in Texas, the setting of her epic novel, and marvels that the ranchers eat the same food as their hired help. It's a story Meyer heard during his research about Edna Ferber, the Michigan-born, Wisconsin-bred writer of Giant, another Texas novel turned into an epic film. It's a sly wink from Meyer to the reader. Yes, he was an outsider, but he may well know more about Texas now than natives do.

The idea for The Son came in a Texas literature course taught by Don Graham (and once upon a time taught by Dobie), when Meyer learned of what is referred to as either the Bandit Wars or the Hour of Blood, a period from 1915-18 when Texas Rangers and local lawmen slaughtered Texans of Mexican heritage in a racial purging. Meyer's original story was set in a more modern era, but he threw that version aside and concentrated on Eli as the patriarch.

"I came here in 2005 with no interest in Texas or the South," Meyer says. "It's a charismatic place. You come to realize that understanding Texas is crucial to understanding who we are as a people. The story of this state is a way to tell the story of the entire country."

The series premiere of The Son airs Saturday, April 8, on AMC. 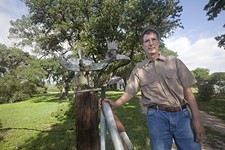 The Son
Imagine an aerial view of Texas, in which hidden elements of a huge, breathtaking landscape are suddenly made clear