The little brother of the Fest grows up 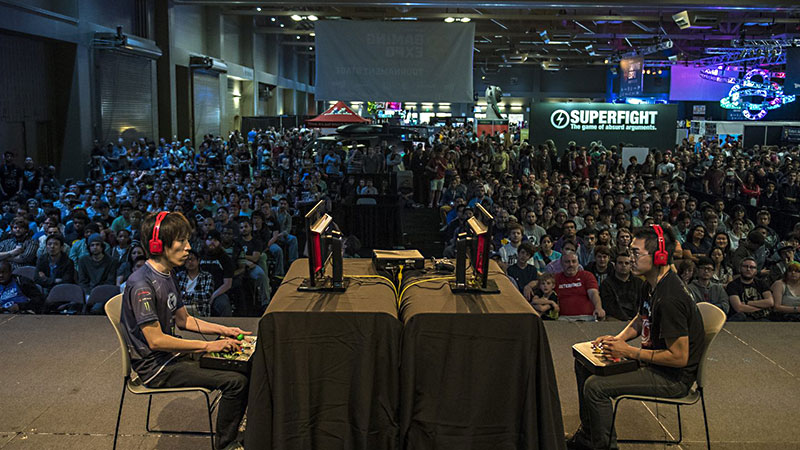 The nerdy little brother to SXSW Interactive strikes out on its own a bit this year. SXSW Gaming celebrates video and board gaming as well as wider geek culture, with no shortage of game demos, panel discussions with industry insiders and personalities, and hordes of fanboys and fangirls in intricate, handmade costumes.

However, this year marks a major change. For the first time in its 12-year history, SXSW Gaming is charging for admission. Any badge or wristband for Music, Film, or Interactive will grant entry, but for the credential-less, a new one-day or three-day wristband is required.

On the main show floor at the Convention Center, conference-goers can play demos of new and unreleased video games from Devolver Digital, Rocket League developer Psyonix, and many more. Even Nintendo – fresh off the launch of their new console, the Switch – will be showing off its goods. Those looking for some analog action can check out the Tabletop Experience, where hundreds of new and classic games are available to play. There's also an extensive program of industry-focused panel discussions on the Gaming Sessions stage, covering topics ranging from gender diversity, politics, and virtual reality development. A separate Geek Stage is home to panels focused on gaming culture and personalities, with talks on pro gaming, live streaming, voice acting, and more.

Under-the-radar developers also get their time to shine at the Indie Corner, featuring game projects chosen by SXSW as the best of the best among hundreds of entries. Attendees are invited to vote for their favorite in the Gamer's Voice Award. Developers each have a time slot on the Gamer's Voice Stage to argue the case for why attendees should vote for their project.

Competitive types should seek out the Esports Stage, where high-level players of League of Legends, DOTA 2, Street Fighter, and Super Smash Bros. duke it out before a live audience. Operating separately from the Esports Stage is the Hearthstone Major, a tournament for Blizzard's ultra-popular online card-battling game open to all attendees and with a combined prize pool of $10,000.

After a day at the Convention Center, wristband holders may attend SXSW Gaming's opening party on Thursday night. The party features a cosplay contest, with creators of DIY costumes celebrating characters from games, anime, and comics competing for special awards, and a performance by video-game-themed metal quartet Powerglove.

Saturday's big event is the 2017 SXSW Gaming Awards, a ceremony recognizing the achievements of games in categories like Excellence in Narrative, Fan Creation of the Year (which includes fan-made games and modifications in addition to art and video projects), and the Matthew Crump Cultural Innovation Award for unconventional themes, content, or characters. The winners were determined by votes from fans earlier this year. Hosting are video game streaming star Sonja "OMGitsfirefoxx" Reid and Xavier Woods, WWE wrestler and host of the YouTube gaming channel UpUpDownDown. The ceremony also features a performance by Rockit Gaming, a pop group that writes songs with lyrics inspired by video games.

After the awards, keep your wristband on for the SXSW Gaming closing party at the Monster Energy Outbreak House, featuring performances by electronic artists Alan Walker and Burns. The venue's doors open just as the awards ceremony ends, and capacity is limited, so you may want to avoid dragging your feet on your way.