Small Town Crime Is a Nasty Bit of Noir

The Nelms brothers and John Hawkes team up for trouble 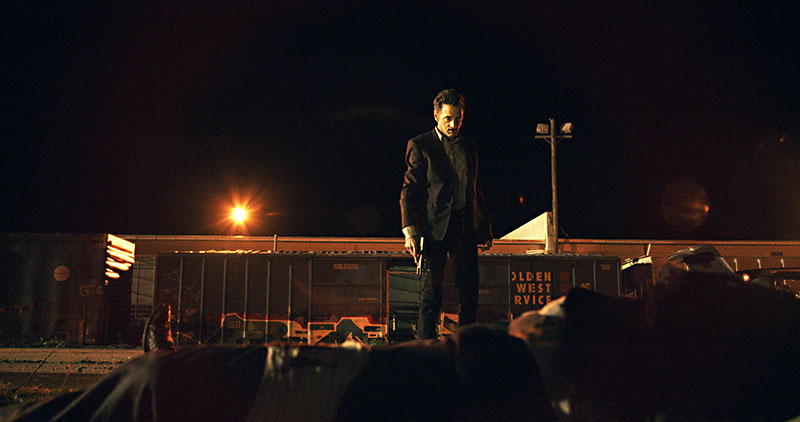 At the sight of John Hawkes' wiry frame stumbling drunkenly out of bed in Small Town Crime, one recalls Elliott Gould's conversation with his cat in The Long Goodbye. Like Altman's era-defining anti-thriller, this revisionist noir finds what writer/directors Ian Nelms and Eshom Nelms call "a very reluctant hero being dragged into a case by destiny." But seeing as how these brothers and longtime collaborators are on the brink of their snappishly funny movie's world premiere at SXSW – their highest-profile screening ever in a two-decade career – they could just as easily be referring to themselves.

Raised in California's Central Valley, the Nelmses grew up worshipping Clint Eastwood, Indiana Jones, and the Coen brothers. Rather than attend film school, the brothers were trained through what one calls "child labor": "Our dad is a professional photographer who would always enlist us to work with him. We'd go, 'We hate this! We're never going to use this.'" Their father made them shoot weddings, presciently promising, "You'll be using this your whole life." Sure enough, in 2002, the boys traveled to Los Angeles, and were introduced by a friend to the actor and filmmaker Tate Taylor. Taylor and his producer, Brunson Green, invited the brothers to shoot flashbacks for their short, "Chicken Party" – "No pay, just come out," Green said. As Ian recalls, "We had just landed in town and really hadn't done much," so they accepted the job. In the cast were Allison Janney, Melissa McCarthy, and "Octavia Spencer, struggling actress."

Spencer, who would go on to win an Academy Award for her performance in Taylor's 2011 film The Help, became a friend and advocate. In 2013, she appeared in Lost on Purpose, the brothers' third movie but only their "first film that someone would recognize as a real film." Ian and Eshom then co-wrote and directed Waffle Street, an acclaimed independent comedy starring Danny Glover. Spencer so enjoyed its trailer that "when we told her we were working on a new feature, she said, 'Can I play a cop or something in it?'" The Nelms brothers responded, "We can do better."

They cast Spencer (who also worked as executive producer) in Small Town Crime as Kelly Banks, née Kendall, the adoptive, fed-up sister to John Hawkes' alcoholic ex-cop, Mike. Eshom Nelms comments, "We came to Octavia with the idea of playing an interracial sister because that is the world we want to live in." Years of mistrust and emotional abuse have put distance between Mike and Kelly, who is married to a lovable, fatherly suburbanite (Blackish’s Anthony Anderson); and their relationship is further jeopardized when Kendall takes it upon himself to investigate a local murder. It was Spencer who helped cast Anderson and Hawkes, the cherries on top of an enviable character-actor sundae. Small Town Crime is any casting director's dream: supporting roles include Robert Forster, Clifton Collins Jr., and Dale Dickey, to name a few.

Shot in 35 days in the mining towns of Utah, the feature represents a notable escalation in visual and narrative assurance for these intrepid multihyphenates. From the retro, skinny suit Kendall wears to his foul, pithy one-liners, the script is replete with classic noir references. They joke, "We would always say on the set: This is Big Lebowski and Dirty Harry." Thankfully, the film more than lives up to the sum of its parts aesthetically, and has potential to become a popular enjoyment for the wider world, post-Fest. With cautious optimism, the brothers say they are prepared for a bigger platform: "We just hate compromising on things. For us, that is the constant quest."