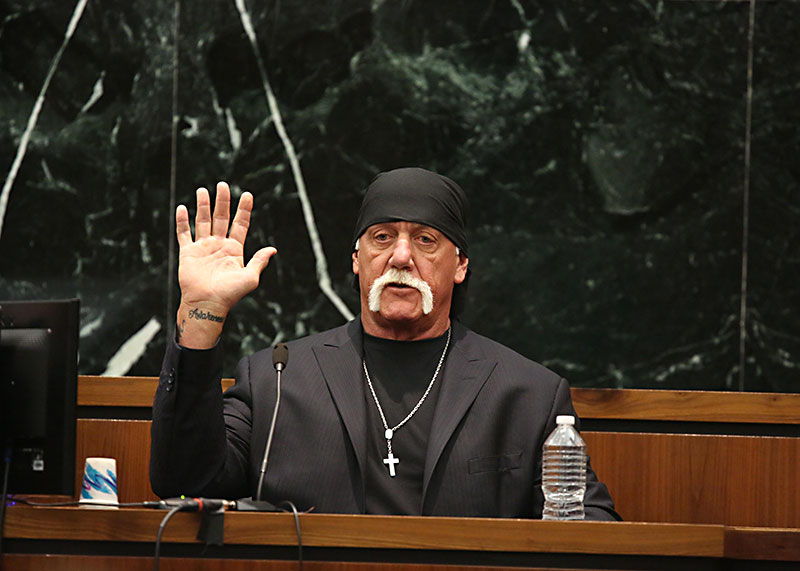 When Nobody Speak: Trials of the Free Press opens, former Gawker Editor-in-Chief A.J. Daulerio ponders the $200 million-plus hold on his bank account. He produces a letter for the camera that contains $200 in cash sent to him by a well-wisher.

It's just part of the human impact created by Bollea v. Gawker, a case that circled around the website's coverage of a sex tape that starred professional wrestler and reality personality Hulk Hogan, otherwise known as Terry Bollea. Daulerio isn't the only one in financial ruins as a result; the $140 million judgment (which was eventually settled at $31 million in exchange for the site removing the materials) bankrupted Gawker itself.

Yet, the spectacle of Bollea v. Gawker, the dirty details and the he-said-she- saids, really serves as just the hook director Brian Knappenberger uses for a broader rumination on the state of the free press in the Trump era. The revelation that Silicon Valley billionaire Peter Thiel had a hand in financing Hogan's legal battle, and his later rise in Donald Trump's campaign, became another major theme.

"That was before we started making the film, before Peter Thiel spoke at the RNC, before he gave money to the Trump campaign, and before he became a part of Trump's transition team," said Knappenberger. "And then, of course, before Trump won and became president."

Gawker reported on the PayPal co-founder's sexuality back in 2007, and told The New York Times in 2016 – after reporting came out that he was supporting Hogan – that while he wouldn't consider funding Hogan's lawsuit to the tune of $10 million revenge, it was definitely about "deterrence." Knappenberger also chose to include the story of journalists at the Las Vegas Review-Journal, who risked their jobs to report on the identity of its new owner, who turned out to be Nevada billionaire Sheldon Adelson.

"Elements of this aren't new, but there is a weird and new kind of moment we're in," Knappenberger explained. "Inequality is so staggering, and the ability of the über rich to leverage that money against the fourth estate is ... we're experiencing new glimpses into how that can be done."

Attacks on the free press from activist billionaires and President Donald Trump are "happening against a backdrop where the press is very vulnerable, where it has lost a lot of its traditional funding sources, which is advertising," Knappenberger said. "It's lost a lot of that to the internet. So the press is already in a period of transition."

But Knappenberger has faith that the media can adapt to this new environment. His hope is that it results in a media that does its job even better than it had in calmer climates.

"What it should be is a galvanizing moment for people who believe in the First Amendment, that believe in a free press and its importance to a democracy," he said. "This should be a moment when we redefine the adversarial relationship between the press and powerful people in a way that I hope is enduring even beyond Trump's presidency."

Nobody Speak: The Trials of the Free Press

Nobody Speak: The Trials of the Free Press, SXSW 2017, SXSW Film 2017, Brian Knappenberger