Cinema With a Conscience

Mobile Loaves & Fishes team up with the Alamo Drafthouse 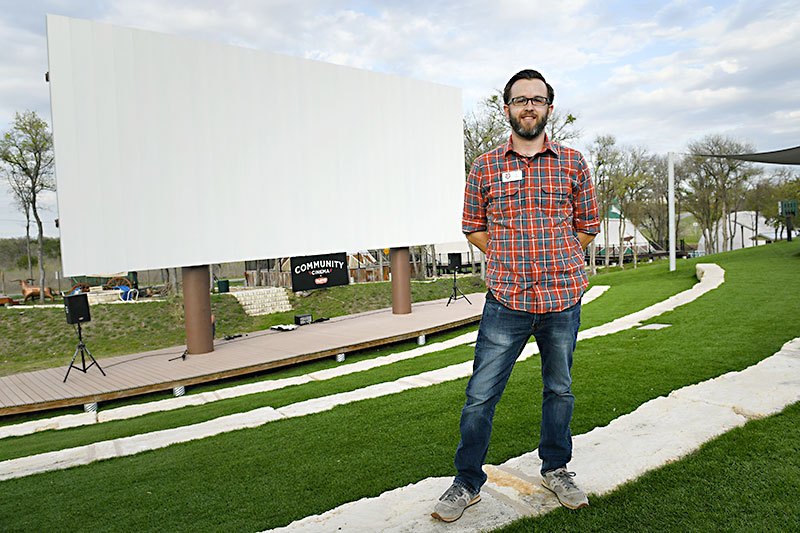 It looks like a regular outdoor cinema. Out along Hog Eye Road, just outside of East Austin, green-stepped lawns form grassy stadium seating, with speakers wired into limestone blocks. There's a screen made of long slats on a sturdy metal frame, and an Airstream trailer converted into a projection booth. But there's a lot more going on than the odd screening under the stars. While many moviegoers have gotten used to multiplexes in malls or mixed-use developments, Community Cinema is the gateway to a new development for Austin's long-term homeless: the 27-acre Community First! Village.

As much as it's a nexus point for the village, Community Cinema Director Ed Travis also sees it as a movie theatre for far East Austin. "I want anyone to feel like they can come, hang out, and have a great experience."

Travis came aboard three years ago as a volunteer in the Genesis Garden program, helping Community First! residents raise vegetables. At that point, he said, "There was just an amphitheatre with grass. But the screen wasn't there, and there was no projection equipment." A year later, he started working full time with the village, but with his background as a film PA and editor-in-chief of movie news site Cinapse, he quickly gravitated toward the screening project. He said, "Pretty quickly, they said, 'When we're ready to have programs, you're the guy.'"

So last May, he started free bimonthly community screenings, starting with Mad Max: Fury Road. The cinema has also held special events, such as the filmmaker dinner during Fantastic Fest, and seasonal holiday screenings. Travis said, "We had 200,000 Christmas lights strung around the entire property, and I was dressed as Santa. I even sprayed my beard white."

The village and the cinema are the culmination of the dream of Alan Graham, founder of Austin's Mobile Loaves & Fishes homeless charity. Travis said, "For him, it was a truck ministry, and it came out of, 'I just want to start feeding people.' Then the Community First! Village visions started with, 'Hey, what if we can lift just one person off the street?'"

The spark for including a cinema came from Alamo Drafthouse boss Tim League. With several businesses on Sixth Street, including the Alamo Ritz, the Midnight Cowboy cocktail bar, and the Klub Krucial office, he was intimately aware of Downtown Austin's homelessness crisis. However, he wasn't just looking at it as a policing issue. Travis said, "Tim was like, 'What if there were more creative solutions?'"

That's exactly what Community First! Village does. Residents pay rent on a single-person home, depending on what they can afford, going from a "canvas cottage" with an electric hookup and shared bathrooms and kitchens, to a handcrafted and fully furnished tiny home. This is not transitional housing, but a long-term home with access to health care and employment opportunities: Some residents even learn trades like blacksmithing, and sell their work through the village store. Two units are designed for hospice care, and there is even a columbarium for the cremated remains of tenants and friends of the project. For the residents, Travis said, "This is home."

Just as with the store and the forge, the cinema provides employment opportunities for residents. During screenings, they sell popcorn and concessions to guests, earning 40% of the sales revenue plus tips. Long-term, the plan is to hire a resident to work with Travis.

This March, the new screening season begins and goes weekly: Every screening will be free, with audience members able to make up to a $5 donation when they book a seat. Yet for Travis, the cash they raise isn't the most important part of having visitors out at the village. "A night like tonight, when the sun goes down, and the stars come out, and we're just out here watching a movie? It's heaven."