The Hollywood Blacklist and the Making of High Noon "The anxiety goes nuclear," Glenn Frankel says of those who felt truly left out of American politics. "Sure enough the backlash comes around. People feel outsiders have stolen our culture and government. They wonder how we get it back."

The author of High Noon: The Hollywood Blacklist and the Making of an American Classic (Bloomsbury, 400 pp., $28) isn't talking about the era of Donald Trump, but he admits the rhetoric/psychology is shockingly similar. Instead it's all about post-New Deal, post-World War II anger and fear.

"I can feel the echoes," says Frankel, a retired Washington Post foreign correspondent and previous head of the University of Texas School of Journalism. "Trump and a lot of the people who support him talk about the Fifties as a time they want to go back to. But if you delve into the early Fifties there was great anxiety and turbulence. We had open political warfare over what our country should be."

Forget modern-day Islamic terrorist bogeymen, he says. "Communists are even scarier. They look like us. On one hand, the left was seen as following in lockstep with the evil dictator in Moscow. On they other they were super smart. We had to root them out."

How fear is tied to the making of iconic Western High Noon drives Frankel's book. Dead center of the vortex is Carl Foreman, a relatively unknown screenwriter under the radar when the House Un-American Activities Committee reps arrived in Hollywood in 1947 with thick dossiers. Foreman and others had dabbled in the Communist Party when it was the cool, fashionable thing to do. That quickly transmogrified into loyalty oaths for some and prison time for the Hollywood Ten screenwriters found in contempt of Congress.

By 1951, Foreman had teamed with Stanley Kramer and was a rising star. His notion: a screenplay that takes place in real time. That was blended into a Western short story plot about a sheriff who stands alone against the bad guys to form the classic High Noon. Higher notoriety meant it was Foreman's turn to face the committee. He knew he'd be asked to rat on friends just as the film began production. Frankel counters Foreman's story with that of High Noon star Gary Cooper, an authentic Montana cowboy with fluttery eyelashes whose career is ebbing as he enters his 50s. Cooper stands up for Foreman as much as he can. Lurking on the blacklist edges are right-wing actor and Cooper pal John Wayne, gossip columnist Hedda Hopper, young HUAC member Richard Nixon and Screen Actors Guild leader Ronald Reagan. Meanwhile, the mainstream media reports on the HUAC hearings and their aftermath with little nuance or questioning.

"He's a reluctant draftee in the political wars. He doesn't know what he wants to do," Frankel says of Foreman. "Of course he wants to save his career, but he can't knuckle under. He becomes a hero against his own better judgment."

Foreman's anger makes its way into the High Noon script as the scared voices of the townspeople who abandon their sheriff to the bad guys. "I like to write about people when they are facing a moral crisis that sums up who they are," Frankel says.

The book's seed was planted during his Austin days, when Frankel heard UT film prof Charles Ramírez Berg's talk about High Noon. Frankel saw the project as a great follow-up to his critically acclaimed The Searchers, which delves into another Western classic. During research, he uncovered formerly confidential HUAC files and unreleased audio interviews with the High Noon creators.

The lesson from the blacklist and High Noon? "How fragile democracy really is," Frankel says. "You've got to struggle and be vigilant."

A version of this article appeared in print on March 3, 2017 with the headline: Showdown at High Noon 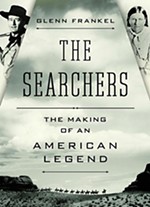