The Rise and Fall of the Bubble Gum King

How Andy Paris cornered the market 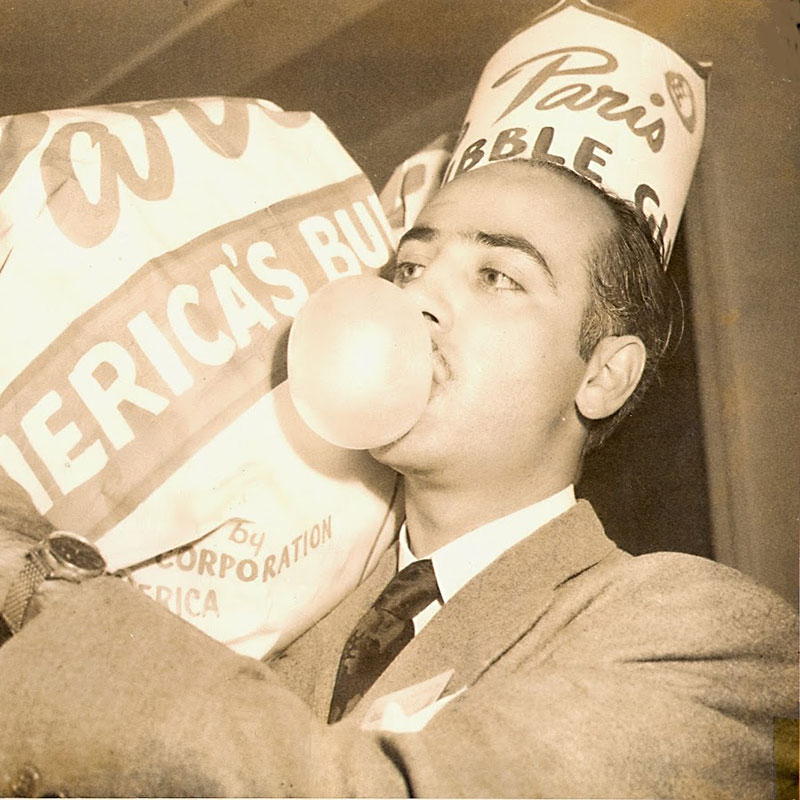 Some remarkable moments in Texas history are unfairly forgotten, while others end up stuck to the sole of your brand-new kicks, or in your little brother's hair. Austin filmmaker and musician John Paris has spent over a decade working to ensure that the story of his father, Andy Paris, isn't overlooked when it comes time to tally the truly ingenious minds of the 20th century.

His documentary, Andy Paris: The Bubble Gum King, isn't just about how Paris senior completely cornered the bubble gum market during the stateside rationing era of World War II, when sugar and sweets were in drastically low supply, although that's part of it. The Andy Paris story is a genuine rags-to-riches to IRS audits all-American tale, complete with briefcases stuffed full of cash, Mexican pistoleros, midnight border runs in a snazzy Caddy, and the Spanish-fluent son of Greek immigrants manufacturing mountains of the chewy, gooey, DayGlo pink candy in McAllen, Texas, with the help of his all-Mexican workforce and investors. Did I mention the dashing Paris – he resembles no one so much as The Thin Man-era William Powell – also dated Marilyn Monroe and was "the most photographed man in America" two years running, this in addition to making the cover of Life magazine? Also of note: He taught Natalie Wood to blow the finest quality bubbles with his trademark chew. You can't make this stuff up.

"Growing up, I wasn't even aware of this," says John Paris. "Then one weekend when I was in sixth grade, I was down with the flu and my mom pulled out all the scrapbooks and some old films and it just blew my mind. I was floored at how famous he was. He was huge. He was like a confectionery Elvis!"

During the war years, Andy Paris was as revered a business figure as Texas had ever produced and his manufacturing and marketing acumen reflect a time when relationships between Mexico and El Norte were far more hospitable.

"While this film is not overtly political," Paris notes, "I'd like the takeaway to be that we should be friends with Mexico and Mexicans. I think my movie's pretty timely for what's going on in politics these days. But they are my people. If my dad hadn't been able to get the latex from Mexico to make the gum, and then make the raw ingredients in Monterrey, this movie couldn't exist."

So has John Paris ever had a chance to sample his father's famous product?

"Nope," he admits. "There wasn't any left by the time I came along and discovered my father's backstory. I have found about three pieces on eBay, along with some of his boxes and all kinds of Paris Bubble Gum artifacts."

And has he dared to unwrap one of his finds and attempt to blow an honest-to-goodness Paris bubble?

"Shit no, it's like 70 years old," Paris laughs. "It's fossilized; it's hard as a rock. The pink bubble gum ends up turning a terra cotta color. One fascinating thing is that I did open one of the pieces and it was the rare licorice-flavored gum, and that's black as coal. That idea of his failed because people just didn't want to chew black bubble gum in the South at that time."

A version of this article appeared in print on February 24, 2017 with the headline: Chew on This