Owen Egerton Gets Spooked Writing The Axe Murders of Villisca 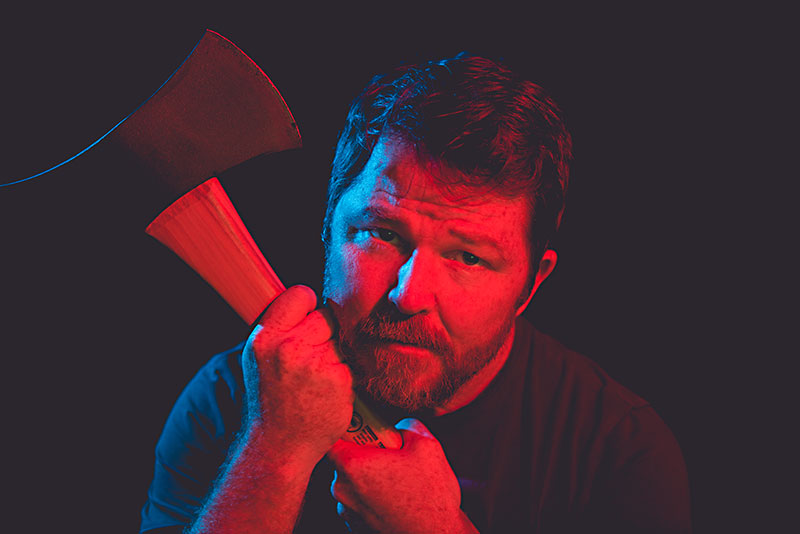 Careful with that axe, Owen! (Photo by Devaki Knowles)

Script conferences tend to be mundane affairs. They don't generally involve spending the night in a haunted crime scene in rural Iowa, but that's where Owen Egerton, satirical novelist and co-founder of movie mockers Master Pancake Theater, found himself when he signed on to write supernatural drama The Axe Murders of Villisca. Yet he doesn't see a big divide between the worlds of comedy and horror. He said, "They both have rhythm, a boom-boom-bang, a setup and release. Of the big genres, these are the two where we know their success with an audible response. We have an out-loud, uncontrolled response of a scream or a laugh."

The Axe Murders of Villisca, which arrives on VOD this week, is a coming-of-age ghost story. Three Iowa teens (Alex Frnka, Robert Adamson, and Jarrett Sleeper) decide to spend the night at an infamous local haunted house, but find there is more waiting for them there than just dust and old furniture.

Yet their fictional story springboards from a real and bloody event. In 1912, in the tiny town of Villisca, Iowa, the Moore family – Josiah, Sarah, and their four young children – and two guests were brutally slain in their home. While there were many suspects, and theories were rife (including the wild claim that a state senator hired a serial killer to do the deed), the slaughter remains unsolved to this day.

Check out IMDb, and Axe Murders is only Egerton's second screenwriting credit, after his own directorial debut Follow. However, that listing misses that he's spent the last eight years working on comedy projects with several major studios. He's even had two screenplays – 2008's Bobbie Sue and 2015's The Boy – make it onto the prestigious Black List of great unproduced scripts. So while Egerton understands why it may seem strange to jump from the studios to a small indie horror, for him it made sense. "It's going to pay less than a rewrite for a studio movie that will never be made, but that's why I got into this, to make movies."

When Axe Murders came his way, he was already working on Follow. In fact, it was Follow producer Seth Caplan who introduced him to his future co-writers, executive producer Kevin Abrams and director Tony Valenzuela. "He said, 'These guys are putting together this film, they have the basic storyline, and they're looking for a screenwriter.' I basically came up with a pitch, and said, 'This is how I would write this. These are the changes I would make, these are the emphases I would make, this is the basic plot.' They talked to a number of screenwriters, and decided that they liked mine best."

Since both were first-time feature film directors, Egerton and Valenzuela soon bonded: In fact, the two productions ran almost simultaneously, with Follow only making its debut at Fantastic Fest 2015 because it finished post-production quicker (Egerton half-joked that was only because "we didn't have the money for a longer post-production. Guess what? It's done.") However, during their conversations, Egerton discovered that there was a personal component to the Villisca story for Valenzuela: The director had spent time at the Moore house shooting a web series. "He had a really horrific experience, and that's what he wanted the film to be about."

Something else Egerton didn't know when he signed on was that Valenzuela wanted him to have a similar insight. After turning in his first draft, "I got this call saying, 'We're going to have a notes session. We're flying you to Villisca, and we're going to have you stay in the actual house where these murders took place.'"

He had one word for the Moore home. "Creepy. It was really scary to be in the house where these horrible things had happened, and these hauntings had been reported, and to go, 'Okay, let's talk about act two.'"

That created an immediate tension for Egerton: He was writing a fictional horror, but there was this grim real-life component lurking in the background. "It played with my head a lot," he said. He kept photos of the victims and suspects over his writing desk, pored over the Villisca city archives, and even visited the graves of the victims. For Egerton, that resulted in a helpful creative pressure, forcing him to be aware of their legacy. "You're telling a spooky, scary-movie story that is hopefully going to have people throwing their popcorn in the air, and screaming aloud, and having fun in the way that horror movies are fun. But at the same time you are talking about real individuals, and a really horrific crime."

That's where the notes session played a vital role, making the tragedy a little more immediate. Sitting in the house, swapping ideas with Caplan and Valenzuela, talking about the family, sleeping in the children's bedroom, "You feel the weight of history in that house, that things have happened there. It's a heavy scent."

However, the Moore house is only the backdrop. What originally appealed to Egerton about Valenzuela and Abrams' outline was "the idea of bringing your own haunting with you. A place might have its own scary past, and its own scary forces, but really the darkest ghosts are the ones we have inside. The things that truly haunt us are the things we carry with us, and perhaps the place just brings them to the surface."

For Egerton, that's reflected in the story's wannabe ghost hunters. "Not only have they each something that they're bringing with them, but they're in a moment of transition. There are those turning points in life, when you're open to wild experiences." That's why the teens are dealing with real and grounded experiences – cyberbullying, bad parenting, growing up gay in a small town – that Egerton called "a lot scarier than a shadow moving in a dark corridor."

But those shadows were still part of the appeal for Egerton: "I love haunted house movies," he said, and the team used several supernatural classics – The Shining, The Changeling, and The Haunting – as reference points. However, the team also had to react against one film. "While we were writing," he said, "The Conjuring came out." The 2013 chiller succeeded because it took so many of the tropes of the ghost genre, and used them to great effect. "There's going to be a playing piano, there's going to be a ball going down the stairs, there's going to be wind chimes, it's got 'em all. We said, 'Okay, let's take some of the things that we had, because they'll feel too much like The Conjuring. Let's make sure that our movie feels fresh.'"

Axe Murders comes at a busy time for Egerton's screen career. In addition to his Master Pancake duties, he's working on pitches for a TV show and a VR series, plus the synopsis for another horror project, and plans for another collaboration with Caplan. He said, "I'm a pretty cluttered person. Anyone who has been inside my house or ridden in my car knows that, but I usually know where everything is, and my mind works in a similar way." Don't panic: This doesn't mean the end of Egerton the author. His next novel, Hollow, is due July 11 from Soft Skull Press, and he described it as "by far the most difficult piece I've ever written, emotionally and craft-wise."

So the big question: Did Egerton experience anything uncanny in the Moore house that night? No. Unlike Valenzuela on his first visit, "We didn't see any moving shadows, we didn't hear any unexplained noises." Well, almost nothing happened. One of the hordes of paranormal researchers that have searched for arcane phenomena had left a motion detector in the children's bedroom. "As we were packing up, early in the morning at first light, breathing a little more relaxed, all of a sudden that motion detector starts going rar-rar-rar. I race up the stairs, and there it is, in the middle of the floor, nothing around it. That was a little bit creepy."

The Axe Murders of Villisca is available on VOD from Fri., Jan. 20.

A version of this article appeared in print on January 20, 2017 with the headline: Death & Axes