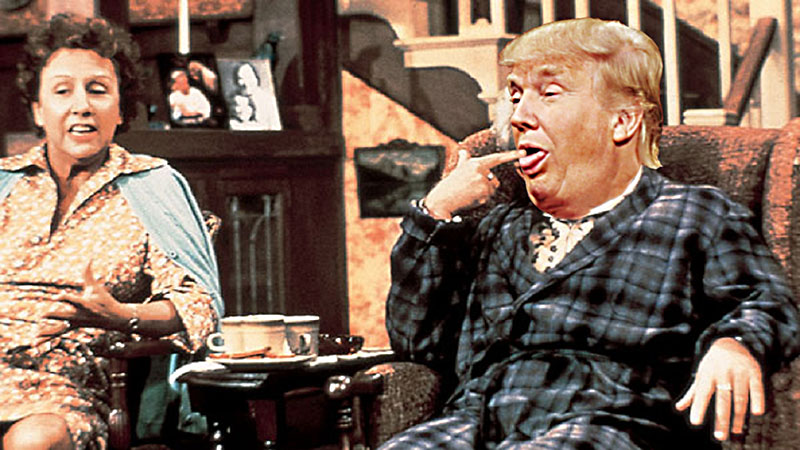 Donald Trump's election has violently thrust forward all of America's time-worn divisions – racism, ongoing deconstruction of class structure, sexism, LGBTQ discrimination, lack of human decency – to the fore, and into our regularly scheduled programming. Similar to the elections of Richard Nixon, Ronald Reagan, and current president Barack Obama, we've been smacked into new orders. This is occurring not only politically, but in how we culturally perceive our present and future, through our preferred mediums/two-way mirrors: our televisions and digital devices.

Trump is showing us the future by communicating with the public instantaneously, in ways never before seen from the Oval Office. Already muddling delicate existential issues (recently China and Taiwan), Trump has made time to boost Saturday Night Live's terrible ratings. "Just tried watching Saturday Night Live – unwatchable!" Trump tweeted, after watching Alec Baldwin once again reprise his parodying of a forever-insecure president-elect, mocking his constant tweeting. "Totally biased, not funny and the Baldwin impersonation just can't get any worse. Sad." A president ready-made for reality TV has not disappointed in his ever-predictable agitation over his public perception.

"Presidents in general have always been a source for comedy, a source for critique, a source for parody," explains Craig Watkins, University of Texas professor in the Radio-Television-Film department. "Because [Trump] is already sort of larger than life, it only makes it more likely – and easier – that he will fall victim to that kind of treatment. I don't see any indication that that's going to subside over the next three years. If anything, it's just going to be more animated, more visible, especially on social media."

Flying in the face of Trump, and who he represents – or at least his constituents' wishes – television and film programming diversity has been making America great, increasing opportunities for traditionally disadvantaged groups to tell more authentic stories and stripping away stereotypes. Shows like – but by no means limited to – Luke Cage, Orange Is the New Black, The Get Down, Black-ish, Aziz Ansari's Master of None, and Modern Family illuminate real-life demographic shifts resented by many, including a significant percentage of Trump voters. However, the oft-forgotten relationship between the increasingly liberal programming and political expression is inexorably tied together.

"There's two things. On the one hand, we know that popular culture creators tend to be pretty liberal or progressive, right?" Phillip L. Cunningham, media studies professor at Quinnipiac University in Connecticut, asks rhetorically. "But the organizations that distribute them tend to be conservative. It'll be really interesting, for example, to see what Fox does."

“We’re doing it every day with Donald Trump running for president. He’s Archie Bunker. They’re both from Queens. They both have these misogynistic, racist points of view. And they spout them.” – Rob Reiner

To Cunningham, Fox's communications hydra – which features Fox News as well as Donald Glover's critical smash Atlanta – "has always been weird, because you have to discern the difference between something like Fox News, which of course is really conservative, and Fox Network, which is actually progressive." In fact, aside from its profitable and influential news group, the rest of parent 20th Century Fox leans progressive, which could lead one to wonder if Fox News itself is unspoken satire.

"One of the things I teach my students is that in attempts to be counter-hegemonic, you're actually feeding the beast," says Cunningham. "So you watch The Simpsons, you watch them lampoon conservatives and the like, but you don't think about how watching The Simpsons keeps Fox News on the air – because those two things aren't unrelated. The one feeds the other. The viewer's support of The Simpsons – and other shows, like South Park, Saturday Night Live, or The Daily Show – is keeping the conservative mill going, even in your attempts to be counter-hegemonic."

One show, Nixon/Ford era cultural touchstone All in the Family, now feels prescient, to the extent that actor/director Rob Reiner – who starred as satirical icon Mike "Meathead" Stivic, paterfamilias Archie Bunker's liberal son-in-law – claimed it so in a pre-election podcast with New York Times writer Jonathan Capehart. "We are doing it!" exclaimed Reiner. "We're doing it every day with Donald Trump running for president. He's Archie Bunker. They're both from Queens. They both have these misogynistic, racist points of view. And they spout them." Capehart asked if it meant Trump's supporters are racist. "They're not all racist," said Reiner. "But that doesn't mean there isn't a big strain of racism [in his] constituency, and he knows it."

There's something tangible to the Trump/Bunker analogy (slightly imperfect – at least Carroll O'Connor imbued his character with humanity. With Trump, that is unclear). Trump as Bunker was actually speaking to millions of Archie Bunkers in all classes (and all races, to be clear) and not just the media-targeted white working class, ironically tired of identity politics. We could be previewing a shifting in cultural attitudes in exploring what whiteness is and is not, given recent intersectional demographic isolation of certain whites coming to the fore (i.e., Rust Belt voters).

"You see, for example, particularly with Family Guy, there's a notion that they're an equal opportunity offender," says Cunningham. "But that's not actually true. For example, everybody can get it theoretically, in that there's a joke made about them, except for whiteness. Ethnic whiteness gets made fun of. 'Irishness' gets made fun of, right? But whiteness, in general, never really gets attacked."

Cunningham continues: "There's a real growing awareness of whiteness and white people as sort of 'raced.' That's not to suggest that [awareness hasn't been there]. Every­thing that features a white family is inherently raced, but we don't necessarily think about the whiteness of those characters, outside of academic and critical circles. It'll be interesting, in a Trump administration, where he's preyed upon the notion of the aggrieved white person, how people will react to seeing that for the first time."

Further connecting us to the rest of the world, America-branded entertainment's future is almost assuredly not singularly "American," entrenching itself into diverse international markets. The casting of Chinese-Malaysian actress Michelle Yeoh as one of the leads (along with The Walking Dead's Sonequa Martin-Green) in the upcoming Star Trek: Discovery series lifted few eyebrows, but actually signals "a clear nod to China," according to Cun­ning­ham. "I think in terms of diversity, we're probably going to see a lot more Chinese and Indian actors and actresses get roles. What that means for African-Americans and Latinos is hard to say. But the move right now in media is not about the national audience here, it's about the audience abroad."