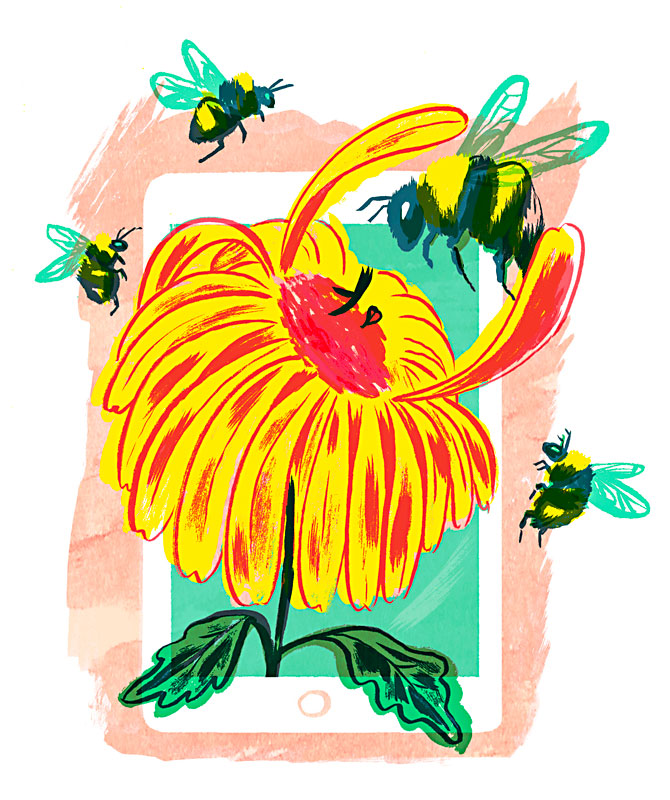 Online dating is a strange but increasingly necessary beast. As you get older, it often becomes difficult to meet people outside your existing social circle. Chances are, you've already dated the people in your immediate sphere and online dating offers a way to not only widen your options but also to apply shiny algorithms to the mysteries of romance.

"Our culture and generation works hard, people are busy, and meeting people is becoming more difficult. If you take a look around in public – at a coffee shop, Whole Foods, or a restaurant – everyone is looking down at their phones," says Alex Williamson, vice president of brand content for local app Bumble.

Online dating companies fall into two categories, each with their own set of problems. There are the websites like Match.com, eHarmony, and OkCupid that feature long profiles and boast matches made by custom data research. They offer an in-depth, and usually subscription-based, online dating experience.

Then you have the mobile apps. Tinder is by far the most ubiquitous, but the Austin-based Bumble has been making a name for itself as it breaks the mold by doing something simple yet revolutionary – putting women in the driver's seat.

"Forcing women to message first puts power in their hands, and allows them to feel in control. It alleviates the pressure placed on men to be aggressive, and starts the conversation from a place of respectful intent," says Williamson.

To understand what Bumble is trying to change, I'd like to walk you through some of my experiences, both as a single woman and as an online dating consultant. Yes, that's right. If you have trouble constructing good profiles or sending messages that lead to IRL dates, you can hire professional help.

These professionals range from companies of ghostwriters to help you sound clever, to consultants to teach you how to better find what you're looking for, and even websites where you can find out which of your photos are the most likely to make someone swipe right.

I can tell you, for example, that emojis with a hyphen nose :-) get a better response than those without :) and that you should have pictures that show a professional headshot, outside with a dog, in formal wear, participating in an activity, or surrounded by a group of friends where everyone is looking at you.

The reason there is such an optimization market for online dating is that there are inherent problems with translating dating culture to online messaging systems.

"In the online dating space – much like in real life connections – men feel a societal pressure to make the first move. Consequently, by fault of our culture, they typically end up bombarding women online. On the flip side, women are inundated with messages, and sometimes it feels hard to cut through the noise to meet the right person," says Williamson.

Like many women, when I get online, I have dating app messages waiting for me. I might have an hour in the evening that I can devote to evaluating potential matches based on a few selfies and anecdotes. I spend most of my allotted time filtering out weirdos asking for pictures of my feet and badly spelled hookup requests. When that's done, I have very little energy left to go out and search profiles, to think about what I'm looking for, and find someone intriguing.

In other words, even an independent, proactive woman like myself gets put in a passive role in these stilted online environments. I remember once thinking that I had a pretty good idea what I was looking for and then hoping someone like that would message me. Oof.

Bumble has been making a name for itself as it breaks the mold by doing something simple yet revolutionary – putting women in the driver’s seat.

Another thing about messaging: The horror stories are true. Every woman I know gets aggressive, rude, and threatening messages more than you would think. During one consult, I let a client look at my message history and he was astonished. Some standout examples of messages included:

"I can see ur online but you don't answer me I guess u a bitch."

"Looking for discreet sugar baby for a married older daddy. I can tell how you like it."

"Wow," my client said. "I knew that happened sometimes, but I had no idea it was that common. Shouldn't that mean I should be getting more responses? If I'm not a jerk?"

Maybe. But there is another layer. Because, while I have a handful of rude or mean messages, I have a virtual metric ton of ones that say "Hey" or "What's up?" Such a vague opener creates a problem because it passes off the burden of saying something engaging to the other person. And doing that means reading a profile, asking a clever question, or finding the perfect GIF. I, like many women, am often too busy fighting exhaustion and cynicism – especially as the world tumbles toward political and cultural madness – to do so.

When men don't get many responses, they start sending more and more generic opening lines. The more generic the message, though, the less likely women are to respond. It's a perfect storm of frustration on both sides.

The savvy men, or the ones who hire me to help, come up with a few catch-all lines. These are generic enough to be reused, but witty or unusual enough to illicit a response. The strategy then becomes to send these to as many women as possible, see who responds, then try to have an actual conversation or set up a date.

But all of this is assuming you even get to the stage of messaging. And with Tinder, many people don't. Most mobile apps require both people to swipe right to match with each other before they can message. But while many people are swiping, not many are messaging. And of the people who are messaging, not many are going on dates. The entropy is astonishing and has prompted editorials, books, and psychological research on the effects of the Tinder­poca­lypse, a word coined to describe the problems with hookup culture, using matching as self-validation, and the illusion of an infinite pool of potential partners.

Bumble has been overhauling the system – one app feature at a time. The founder of Bumble, Whitney Wolfe, knows these problems intimately. She was a partner at Tinder before leaving to start her own social app.

The mechanisms Bumble uses to upend the normal messaging dynamics are really very simple. After swiping and matching, women have 24 hours to message or the match disappears. This solves both the overstuffed inbox and the match-but-never-message problem. After a woman messages, the man also has 24 hours to respond. From there, it's up to you.

"It's such a subtle shift in dynamics, but it completely changes the way men and women interact with each other," Williamson says.

"Unless the internet suddenly crashes forever, we don't see this being a phase. We see it becoming more and more involved in people's lives, so we think it's better to embrace the accessibility technology provides. We aim to change the landscape of business social networking apps, and to put an end to dead-end connections," he says.

But the problems of online dating affect even the most progressive apps. Men's biggest complaint about Bumble is that women only message "Hey." Women complain that the app is more boring than others that don't prevent bizarre and aggressive messages.

Both men and women, if they do meet up, tend to talk about the bad dates they've been on more than other subjects. Although I see Bumble as a big step forward, I wonder if we aren't all addicted to the problems of online dating even more than we are to the supposed convenience of it.

A version of this article appeared in print on December 2, 2016 with the headline: The Online Dating Game