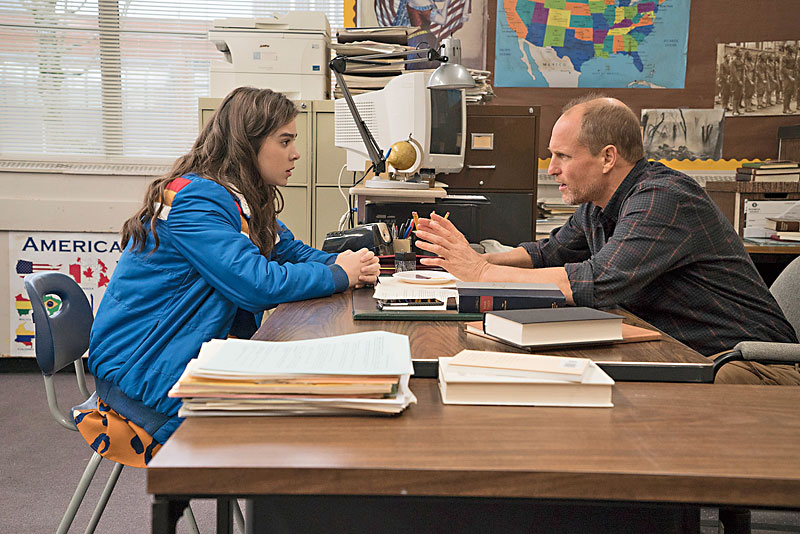 Hailee Steinfeld and Woody Harrelson in The Edge of Seventeen

James L. Brooks sure can pick 'em – newbie filmmakers, that is. The multi-Emmy and Oscar-winning creator of such classic TV as The Mary Tyler Moore Show and Taxi (among many other hits) and of the films Terms of Endearment and Broadcast News, has a history of working with first-timers and fresh voices. He produced Cameron Crowe's first film Say Anything..., as well as Wes Anderson's Bottle Rocket, along with being instrumental in the early directing careers of Penny Marshall and several others. Recently, he attended the Austin Film Festival with The Edge of Seventeen writer/director Kelly Fremon Craig to promote the production, which debuted to resounding praise in September upon its world premiere as the closing-night film at the Toronto International Film Festival. Fremon Craig's only previous film credit is the screenplay for Post Grad but, with the help of Brooks, her directing debut is opening nationally this Friday.

The Edge of Seventeen is the rare teen movie these days that doesn't feature any wizards, vampires, or dying heroines. Fremon Craig's film stars Hailee Steinfeld (who first captured attention in 2010 as the young heroine of the Coen Brothers' remake of True Grit) as Nadine, a socially maladapted teen. A nonconformist since her early childhood, Nadine feels herself to be even more of an outsider now that she's entered the notoriously difficult teenage years. And now that her only friend (Haley Lu Richardson) has started dating her golden-boy brother (Blake Jenner of Everybody Wants Some!!), things have gotten much worse, and she pours out her misery in language that walks a fine line between precocious and pretentious to her teacher (Woody Harrelson, whose marvelous tone balances jocularity and criticism in a singular performance about which Brooks comments, "You really get his disapproval of her, and you really get that he's having a good time as well"). Despite her over-dramatization of events, a lot of crummy stuff indeed occurs in Nadine's life, which make The Edge of Seventeen the most honest and funny teen movie to have come around in a while. "I love when you can go to serious places with a comedy," adds Brooks.

During our interview, Fremon Craig noted that she wanted to explore "how we can feel like everyone has life figured out except us, especially at that age." She wanted to capture teen life in a "really truthful way," and show "what it's like to be a teenager right now in 2016." After reading the first draft of her screenplay four years ago, Brooks, her mentor on the project, suggested she do more research among teenagers and take a "journalistic approach and make sure that all the details were right."

"I remember how complicated this age is," reflects Fremon Craig. "The truth is that it's as messy as any point in life, but maybe messier because you're experiencing it for the first time and you don't have the wisdom of knowing, 'This too shall pass.' It all feels like life and death."

"You slug it out to try and get a movie like this made," adds Brooks. "It's almost like sightseeing in the belly of the beast to get the money and the freedom to do it your way. We were lucky." Furthermore, he notes, "the good thing about The Edge of Seventeen is Kelly gets empowered and Hailee gets empowered, so there will be more good movies to come."

A version of this article appeared in print on November 18, 2016 with the headline: High School Confidential