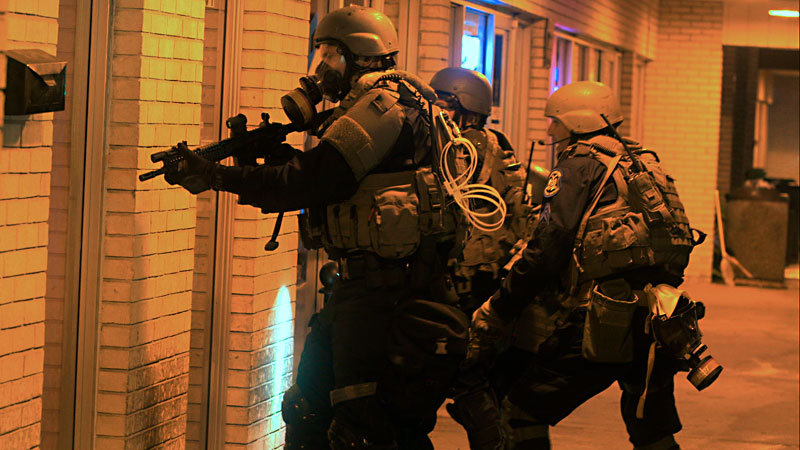 Ominous, pregnant clouds in the backdrop, the first scenes of Craig Atkinson's police documentary Do Not Resist threaten violence, staged on the protest-filled streets of Ferguson, Mo. The night's uneasiness gives way to what looks like a military tactical unit, prepared for dystopian fallout. Using an interesting choice of words, a woman on a megaphone announces that if people were not inside by the imposed midnight curfew, they "could not ensure [their] safety."

Do Not Resist is a critical look at evolving present-day policing efforts and the systems surrounding them, covering fast-charging prevalence of SWAT units, as well as utilization (and inherent troubles) of technological advancements in surveillance. Further, the film doubles as terrifying foretelling, deftly told in a way only someone deeply familiar with police attitudes could execute. "I grew up with law enforcement in our family," explains director Craig Atkinson. His father was an officer and SWAT member of the police force in Oak Park, Mich., just outside of Detroit.

"He became an officer in 1974, and retired in 2002, so [a time period preceding] the 'War on Drugs,' all the way up through 9/11 – which became significant, because [the tragic event] was the starting point for all of this federal money that flooded into police work for equipment. We didn't know that at the time."

Ferguson's protests following the 2014 death of Michael Brown at the hands of Darren Wilson presented unique anguish to Atkinson's father. Protocol in most major cities would include initial use of plainclothes officers, followed by escalation to uniformed officers and so on, if absolutely warranted. Ferguson would be the opposite, says Atkinson.

"They met the protesters with the greatest force that they had, which is the SWAT team. I think that my dad seeing that – he was very disheartened because it was a profession that he dedicated his life to, that had escalated into something that he would never want to be a part of."

Interestingly enough, it would be terror – the 2013 bombings in Boston, and not day-to-day police work – that would incite action, setting forth motion for this documentary's creation. "Watching the aftermath of the days when they were doing the manhunt for the Tsarnaev brothers, it was the first time that I had seen the level of [police] weaponry. What was also new was the mentality of the officers, and it seemed as though it was more of an occupying force, than a force that was there to protect and serve."

Atkinson subsequently traveled to Boston and interviewed people who experienced a particularly heightened police presence, which included police entering homes without warrants. "Some people reported being handcuffed facedown on the front lawn for up to six hours, not aware of why they were being detained, with no charges filed," explains Atkinson. "It just spoke to me that maybe there had been a shift in law enforcement, and the first opportunity that I had to see it was the aftermath of the Boston bombings."

What Atkinson would discover was that the up-arming of America's police forces had already been underway – in large cities and small towns. It would first begin with training, creating or adding to a particular mindset. Atkinson introduces the audience to Dave Grossman, called America's leading trainer for police and military.

"We wanted to know how the police were being trained because I've seen incidences throughout the country where it seems like use of force was relied on more than it should be," explains Atkinson. "Obviously, we wanted to know how they are being trained. Are there some kernels that we parse out, and look to as far as maybe something that's causing all of these frequent killings (of mostly people of color)? We wanted to see who the trainers were, and we came across Grossman. We sat through an entire six-hour course that he taught."

In his course, Grossman, wild-eyed and speaking with an almost religious tack, tells his officer-students that, "the policeman is the man of the city." After comparing his charges to "frontiersmen," he additionally sermonizes: "You fight violence. What do you fight it with? Superior violence. Righteous violence. You are men and women of violence – you must master it, or it will destroy you."

Atkinson came away with a new vision of what current officers are likely working with. "His teaching might be really important for the 0.01 percent of opportunities where you have to do something like that, but the philosophy is integrated into routine police work. It's a heartbreaking realization to find out Philando Castile – mind you he was reaching for a wallet in his pocket – was shot almost reflexively by the officer, who was distraught and saying, 'I don't know why I shot him.'"

Running alongside with these new training seminars is the proliferation of equipment. We're told that since 9/11, the Department of Homeland Security and Department of Defense's 1033 program has given police tens of billions of dollars in grants and/or equipment – vs. for use in various modes of socioeconomic improvement programming. (According to research completed by the Marshall Project, a nonprofit news organization focusing on criminal justice, Austin Police have accepted over $2 million from the DOD's 1033 program alone.)

Atkinson even visits Concord, N.H., a small city with little violent crime, and two documented murders since 2004. Against the objections of citizens, including a former Marine colonel explicitly clarifying reasons Concord doesn't require military-grade equipment, the city council overwhelmingly votes to accept a $258,000 grant to purchase a BearCat armored truck. The viewer is subsequently transported to police's misplaced utilization of armored vehicles and training. A Richland County, S.C., SWAT unit proceeds to unnecessarily terrorize black and brown families – who will be disproportionately affected by these SWAT raids.

The scariest parts of the film foretell a fast-approaching future that includes crime-stopping techniques lifted right out of your favorite spy movies – including use of top-end equipment being contracted out to private groups and police departments. Per Atkinson: "There's one private company that offers the exact same IBM platform that the NSA uses. They're licensing that to police departments for $1,000 a year."

Ultimately, the viewer could wonder why there's such an emphasis on point-of-attack policing and surveillance – given various reports showing violent crime on a gradual decades-long slide, and with terror acts occurring more rarely to a person than winning a large-pot Powerball. Atkinson points at the sneak-and-peek provision of the Patriot Act. "It allows law enforcement to come into your home and search without telling you about it. Warrants to do these searches were issued 11,000 times in 2013. How many of those were for terrorism? Only 51. However, over 9,000 of them were issued for drug investigations."

Then, finally, comes the bogeyman, in the form of Richard Berk, professor of criminology and statistics at the Wharton School at the University of Pennsylvania. Utilizing data mining, Berk has created what's tantamount to the early stages of Minority Report. However, Atkinson saw major issues in Berk's collection.

"How do we know that the data that they're using is accurate to begin with? The reason why I'm concerned about this is because during the Dave Grossman seminar – in portions recorded, but not shown in the film – he says, point-blank, that every police chief in the country knows that we've been cooking the crime data for years. What [Grossman] doesn't realize is that now that data is being analyzed by computer experts like Berk into algorithms to determine if someone should be let out of jail, if someone is likely to commit a crime, if someone in the womb is likely to commit a crime by the time they're 18."

Ultimately, the viewer only absorbs this information. There aren't any voiceovers by Atkinson, nor is he heard asking questions. Do Not Resist becomes a streamlined collage, which, as you begin to slowly pull yourself away from the image, becomes more violently grotesque with each blink.

A version of this article appeared in print on October 7, 2016 with the headline: Arresting Developments