The role of a lifetime 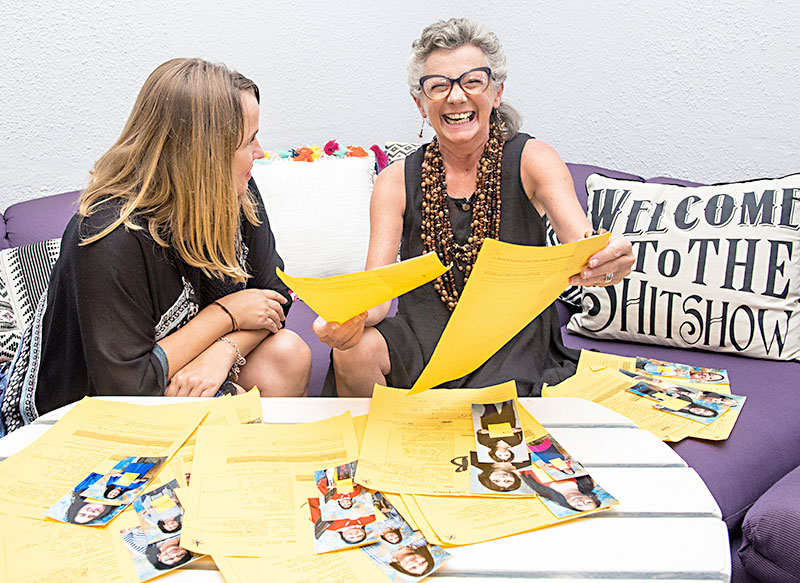 Within minutes of sitting down for coffee, Toni Brock, the Austin-based casting director and co-founder (with Sally Allen) of Brock/Allen Casting, is greeted by a shy stranger. "This is why I can't go anywhere," she smiles. That's because when she does, she is confronted by someone whose career she has started or a life she's changed. The irony that someone, whose "job is to meet with people" and who has met with thousands of aspiring performers for over 30 years, "is not very social" is not lost on Brock. Nonetheless, having cast some of the most popular films and television shows in American history, she has resigned herself to the inevitability of such interactions.

As with all great entertainment success stories, Brock's began by freak accident around 1984. At the time, she was an aspiring actor in Dallas, she recalls: "A friend of mine was an agent, and I went to talk to her about representing me. She just happened to need some help the day I came in, so I helped." The job was pulling talent submissions for Lawrence Kasdan's 1985 Western Silverado, the location casting of which was being handled in Dallas by the legendary Shari Rhodes (casting director of Jaws and Tender Mercies). "Remember," Brock tells me about that time, "we didn't have a fax machine, we didn't have computers. So I hand-delivered stacks of headshots to Shari, then she'd call back and I'd go by wherever she was set up." An ambitious, peppy upstart, Brock – then known as Toni Cobb – had within three years of that Silverado experience co-founded her own talent agency. Then another three went by, and she sold it, thinking, "Maybe I'll go into directing some theatre."

But Rhodes noticed that Brock "had a really good eye for talent" and called Brock asking for her help casting "a little project called The Man in the Moon – Reese Witherspoon's first film." She and Rhodes conducted a national search for unknowns and found three such teenagers to star; so successful was their collaboration that "several casting searches followed" on classic films like The Sandlot (she found three of the kids) and Forrest Gump (no, she did not discover Haley Joel Osment). Brock's savant-like skill for discovering cinematic faces, especially those of children and teenagers, and her eccentric methods for employing them, landed her a plum gig associate-casting Walker, Texas Ranger with Barbara Brinkley.

In a more typical profile, the next line would be "... and the rest was history." Brock's road to industry respect, however, is littered with detours, the willful taking of which displays her firmly idiosyncratic approach to a career. After working on dozens of films, series, and commercials, Brock "went in a different direction" rather than move to Los Angeles or New York. "I had a 1-year-old daughter and I was pregnant with twins, so my husband and I sort of switched our lives around." She began teaching acting from her home, because "we needed to concentrate on getting our children raised." When she could, she took lightweight casting projects, like the long-lost cheerleader comedy Slap Her, She's French! and the Matthew Perry vehicle Serving Sara in the first few years of the new millennium. For a moment in time, Brock's life was slower.

The moment did not last long. "I didn't know we were better than anyone in particular until we started to get more calls," Brock recalls of the explosion in projects, both national and Austin-based, that began for her in the early 2000s. In time, with her soon-to-be partner Sally Allen, as well as the brilliant Beth Sepko-Lindsey and, more recently, Vicky Boone, Brock had become known locally for her capacity to find both "trained talent" and "real people" when projects called for them. On 2005's The Ringer with Johnny Knoxville, for example, "we went out and got real Special Olympics athletes in the San Antonio/Austin area" to portray Special Olympians. Then there was the Terrence Malick-produced The Beautiful Country, for which Brock and team convinced several hundred Vietnamese and Thai churchgoers to take extras roles. As Brock puts it, "If they need bikers, we go to biker bars. If they need dancers, we go to the strip clubs." She faced few insurmountable challenges, joking that only, "in Texas, the hardest thing is to find people who'll do nudity. It's one thing to do nudity for a SAG project if you have a role and you're trying to create a character. But it's a completely other thing to be in the background and to do extraneous background nudity. That has been more of a challenge than anything."

Brock's and Allen's knacks for "real people" casting earned them mutual renown within the filmmaking community as perhaps the premier casting agency for extras in Austin. Although the two have worked on projects as canonical in media history as There Will Be Blood (a hassle to find enough people in Marfa) and Breaking Bad (which Brock feels had "the best casting she's ever seen in a network show" outside of Sepko-Lindsey's Emmy Award-winning work on the Friday Night Lights series), Brock still considers her experience casting extras for the Friday Night Lights movie a prime example of her impact on the local community. "We were in Odessa shooting for a month. There were times when we struggled to get a hundred or so people into a scene. Suddenly, there was a layoff in the oil fields near Odessa. It became an entire town that we were able to employ and feed for a month. We had to turn away people to be extras in the stands every night unless the producers said, 'Let 'em all in!'"

Last year alone, Brock/Allen cast the extras for such critically acclaimed dramas as ABC's American Crime, HBO's The Leftovers, and My All American. Brock attributes the triumphs of her unique career path to two factors: the "skyrocketing in quality" of Austin-based actors, "who are much better trained than 10 or 12 years ago"; and to her partnership with Allen, a "perfectionist" and "detail person with an incredible eye." As their business together continues to help burgeoning actors to find their way onscreen for the first time, Brock seems quietly humble in person. But mention her IMDb page to her, and she sighs nostalgically: "Yeah, we have worked on some great stuff."

A version of this article appeared in print on September 2, 2016 with the headline: The Role of a Lifetime