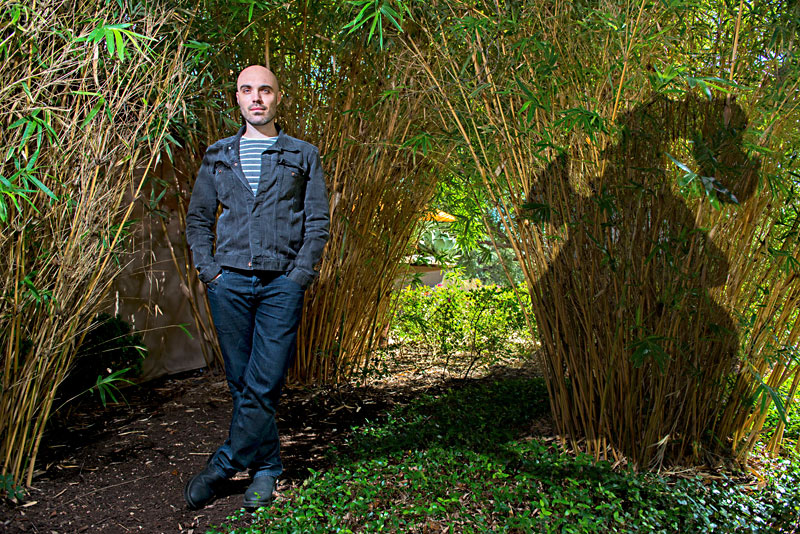 If you're looking for wonder in Pete's Dragon, it's not on the face of an orphaned boy raised by a beast in the woods. It's in the eyes of Robert Redford as an old woodsman, talking about the time he saw something mythical and magical in the forest. Writer/director David Lowery said, "The line that really matters to me with his character is when he says that just believing changes the way he sees the world. That, yeah, there may not be literal magical creatures out in the world. But just being open to the possibility of something that exists beyond our realm of comprehension, that allows you to see everything in your life a little bit differently."

There's a little wonder and surprise on Lowery's face, too. The Irving-raised filmmaker just had his first public screening of his reinvention of the 1977 Disney live-action/animation hybrid before a packed house at the Paramount, and now he's hanging out in the lounge at the Four Seasons. "It's very strange," he said. "I'm used to coming to Austin and staying on my friend's couch." It's a long way from when he depended on Austin Film Society grants to get his debut feature, St. Nick, made; but then that's exactly why the Austin screening, held as an AFS fundraiser, was special. It's Lowery's way to give something back. He said, "It's really very special and wonderful for me to be able to bring this movie back here, and hopefully pave the way for some future filmmaker to make their own film, and keep that cycle going for as long as possible."

As the Paramount audience found out, here be dragons. Or at least one dragon, Elliott, who runs the wild woods with his human friend. And it's never in question that he's real. While the more conventional approach would involve more ambiguity, Lowery happily tips his hat to Calvin and Hobbes, having Elliott and Pete always be by each other's side. He said, "It was really important for us to have the titular dragon appear before the title, so audiences would know what they were in for, and you don't have to spend a lot of time and waste a lot of shoe leather pretending that it may or may not be real."

"That was always the idea," said Lowery's longtime writing partner Toby Halbrooks. "Get him early in the movie, throw that out the window so we could have more time with him emotionally and less time with him as some mysterious creature."

The 1977 original came during the lowest point of Disney's doldrums. Its output had dried to a trickle, the last of Walt's nine old men (Disney's core group of animators) were on their way to retirement, and the studio itself, within a few short years, would seriously consider shuttering the animation department completely. However, the story of orphan Pete, who runs away from his evil foster family to live in a New England lighthouse guarded by his invisible friend Elliott the dragon, struck a chord. As the first Disney film released on VHS, it built a young audience hungry for home releases – including Lowery and Halbrooks.

Yet, when they decided to bring the story back to the screen, they cut much of what made the original charming and chintzy. There's no evil Gogan family, no snake-oil-shilling Dr. Terminus, no lighthouse, and definitely no song-and-dance numbers. Instead, they stripped it back to its narrative heart: fellow lost souls Pete (Oakes Fegley) and Elliott (voiced by the original voice of the Crypt Keeper, John Kassir) and what it means for their friendship when they are discovered by a forest ranger (Bryce Dallas Howard), her logger fiancé (Wes Bentley), and his scheming, ambitious brother (Karl Urban). For Halbrooks, that was the emotional kernel of the story: "The boy and his dragon, they were a family, and they were separated and wanted to get back together."

Yet while it has its fans, as Disney revamps its iconic franchises – Sleeping Beauty, Cinderella, The Jungle Book, Peter Pan (for which Lowery is now signed up to helm) – Pete's Dragon would seem low on the list. Moreover, Lowery seemed like the least likely pick as director, especially coming off the back of dusty noir Ain't Them Bodies Saints. Lowery said, "We weren't seeking this project out, and Disney wasn't trying to knock down our door to have us do it."

It was Lowery and Halbrooks' agent, Craig Kestel, who started them on their voyage into wonder. Lowery said, "He knew this was a project that Disney had in development, but didn't have a story for, and didn't have a script for." With the film still in its most nascent stages, they met with Disney execs for what the director called "a classic meet cute. ... We realized that we had mutual interests and mutual ideas about how best to make a film like this, and what the tone should be, and what the texture should be."

There was one point of concern for Lowery: "I was worried that they wouldn't have faith in my ability to handle a movie in which a visual effect is one of the key characters." However, Disney selecting New Zealand-based effects powerhouse Weta (most famously responsible for the Lord of the Rings series' visual sorcery) to give Elliott life took that pressure off him. "Knowing that they were going to do the dragon, I had complete faith they would make it work, so I just had to treat it like a character that was never actually there on set."

That said, there's probably a CGI artist cursing Lowery's name for one very simple decision: Instead of scales, Elliott has a thick, green pelt. "Fur is hard," said Lowery, "and it doesn't get any easier. Any movie that Weta and any visual-effects company does, they have to start at the ground and work up."

Having the artists and number-crunching machinery at Weta solving those technical issues allowed him to concentrate on the tone that Disney wanted from him. For Lowery, that's what shows the through line to his earlier work. While Pete and Elliott may seem far removed from Ain't Them Bodies Saints' ill-fated and star-crossed lovers, or St. Nick's siblings on the run, they are all in search of something or someone to call home. "It never felt like we were doing something gigantic or enormous or rooted in spectacle," he said. "The scenes with the dragon in the cave or in the forest, or when he's looking through the window of the house, directing those scenes felt as intimate as shooting a little scene in St. Nick with two kids, in an abandoned house, and a crew of three."

But there was still the sense of magic, the wonder in Redford's eyes when he sees the impossible is real. Lowery had that moment the first time he saw Elliott, the invisible on-set presence, when Weta sent over the first completed scene. Halbrooks described the experience as "a moment of relief that it's going to work," a sentiment that Lowery echoed. "It's like watching a really great magic trick," he said. "You're seeing something that shouldn't work and that doesn't make sense become completely tangible. I remember looking at that footage on my phone and thinking, 'I was there that day, I know there was nothing running behind the little boy in the river, and yet right now I'm completely believing that there was, and it's messing with my head in a major way.'"

A version of this article appeared in print on August 12, 2016 with the headline: Reimagine Dragons