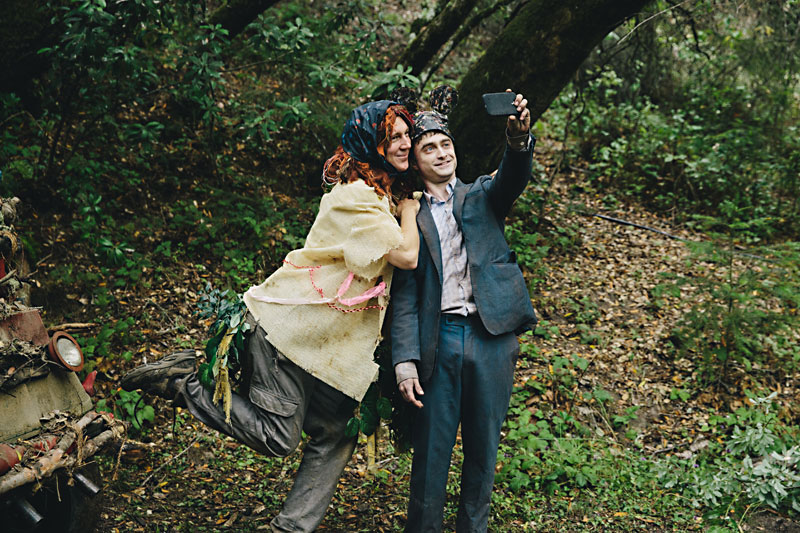 Everyone dreams of a magical friend. Pete and his dragon. Finn and Jake. A shipwrecked loner and his one true pal, a talking, farting corpse.

That's the premise of Swiss Army Man, the bizarre and heartwarming comedy about a modern-day Robinson Crusoe, Hank (Paul Dano) and a cadaver he calls Manny (Daniel Radcliffe). In the latest title released under the Drafthouse Selects banner, think Weekend at Bernie's directed by Charlie Kaufman as the living learning important lessons from the dead. Daniel Scheinert, one half of filmmaking duo Daniels, said, "We got excited about making the movie when we came up with the idea of making someone cry with a fart."

His creative partner Daniel Kwan, aka the other half of Daniels, said, "Our goal was to take a fart and cause it to lose its meaning by using it over and over again. The film could fill it with its own meaning, and ideally you would be a changed person. That's the lofty goal."

When finessing the script for their outrageous and touching bromance, the first-time feature filmmakers were given the unexpected boost of being invited into the Sundance Screenwriters Lab, where Scheinert recalled "talking to these overqualified filmmakers and screenwriters about the human experience." It sounds like heady stuff, but it also proved they were on to something. "Someone was telling us that their baby was less than 1 year old, hadn't talked yet, but laughed at a fart. Farted and giggled. It was a sign that their baby was conscious and alive and had a sense of humor already."

This was still a hard film to explain in advance. "No one was ever convinced in a 30-second conversation," said Scheinert, "so it required some patience." The real elevator pitch, he said, was simple: "These guys made 'Turn Down for What.' We were so lucky that video came down right before we tried to raise money, because we could say, 'We made something crazy. People seem to like it. We've got something else crazy, and we think people will like it.'"

For Kwan, what was important was being honest with potential investors and collaborators. He said, "95 percent of people said, 'You know what, this isn't for us.' But for the few people we actually sat down with, it was the strange weirdos that just happened to be excited about something new in the world." It wasn't easy to find financiers, but those they finally got were true believers in their vision. "We wanted to ask for less money so that we could do something bold," Kwan said. "When we went out to shoot it, nobody said, 'Whoa, whoa, whoa, what are we doing here?'"

Those strange weirdos included Radcliffe, who Scheinert called "the candy center of our abrasively coated movie." Yet even knowing his controversy-courting performance in Equus and the topsy-turvy morality of demonic romance Horns, the Daniels were wary that their experiment in what Kwan called "reckless moviemaking" would be a step too far. Scheinert said, "I didn't want to be the guy that took his trust and made him look like an idiot."

It was actually Dano who originally suggested the Harry Potter star. Scheinert said, "We Skyped with him, and he was immediately talking about his favorite TV comedy shows and immediately bubbling over with enthusiasm. We're like, 'Oh my God, if this boy is the center of our film, it's going to be irresistible.'"

Kwan added, "His first question on Skype was, 'Can I do all my own stunts?' It encapsulated how perfect he was, because he understood what was the joy of this film."