When TV gets weird 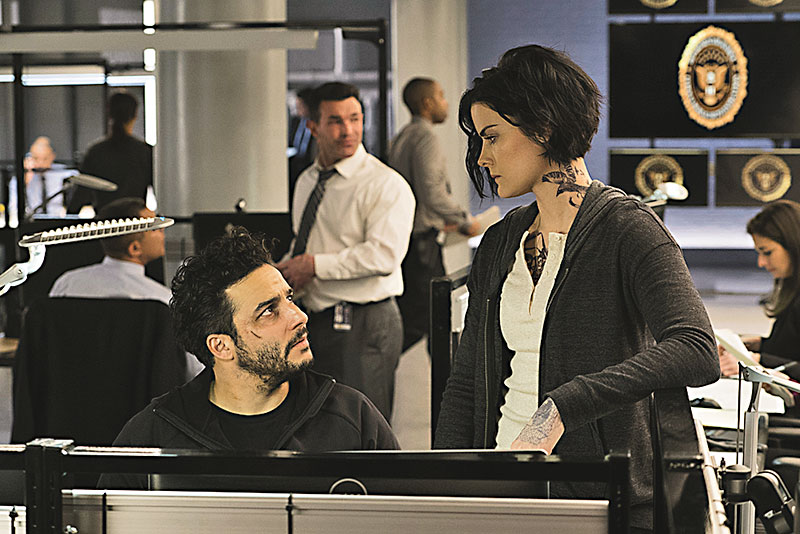 With Quantico, Blindspot, and The Blacklist ending this month, it's an interesting time to look forward, at the upfronts. You're always going to be looking back at what survived the cull, what the patterns presaged, what they ended up meaning, what overcame its hype and settled down, what never recovered from winter hiatus, and so on.

Both freshmen Quantico and Blindspot followed The Blacklist's model of procedural layered atop central mysteries and experimental formatting: Quantico is a socially conscious terrorism thriller told in two time periods, while Blindspot more formally followed Blacklist's lead by making its central character's identity the prime mystery to be solved, central to our weekly stories. Also common among these three shows is that they are insane.

Lost played with format and delayed answers, creating a blueprint that has become more successful as each season's new crop is less beholden to it. Those first couple years of TV after Lost were really hard to watch, as networks put out work to its letter rather than its spirit. We can say Blacklist's success, which burned hot and early, led to a lot of the development still in play now, regardless of what people think of current-day Blacklist.

Blacklist got weird this season: hallucinated bottle episodes, other suspensions of its core formula. Quantico was the same amount of weird all along, as its recruits spent as much time double-crossing one another in the past as in the present, resulting in a permanent paranoia that looked intentional by the end. Anybody could turn on anybody else, and likely already has.

Blindspot is definitely weirdest, which you wouldn't expect from the video-gamey premise: An amnesiac Jane Doe, covered in tattoos, is discovered naked in a duffel bag. At the appropriate winter-break time, it's revealed the whole messy complicated tattoo situation was of her own devising, and after a fairly genius period Jane spends resenting her past self for putting her in this situation – at least as relatable as anything Revenge's Emily Thorne ever went through, high praise in my opinion – we have arrived at the end of both her forgotten conspiracy and possibly the show's entire first-season shape.

Of course, that leaves out the Banksy episode, the tattooed baby in a duffel bag that leads to a Never Let Me Go organ farm conspiracy, and most of all it neglects to take into account the two episodes featuring 2015's most wonderful secondary character "Rich Dotcom," a roguish, cheeky power-bottom/art thief who escapes the FBI, at one point, using a paragliding apparatus he has cleverly concealed in his tuxedo.

The only thing weirder, this last season, was The Family on ABC, which I loved so much I can't even talk about it so soon after its cancellation. But it does tell me the real reason for this last season of twisty thrillers might have been less about our political landscape and more about the fact that Hollywood writers are artists and people, like the rest of us, and pushing back against the easily digestible nature of broadcast's evergreen, syndicatable franchise blockbusters – your Law & Orders, NCIS and CSI, your Chicago Occupations – means finding new ways to conquer old formulas.

There is no ego in work-for-hire, and so where the weekly case is most or all of the game, that's how it can begin to feel. So you twist the format, make it about a pretty lady, give us a cheesy reason – tattoos, a list – to solve nominal cases each week, and get to making things that show an actual personal investment. Which is why the 2016 upfronts – with their animated and CGI monsters, inexperienced millennial parents, and talking dogs – are more thrilling for the simple fact of their similarities: If a network is willing to put its homoerotic steampunk time-travel fantasy up against four other similar-seeming shows, that means they really believe in it.

Which means weird is back, in a big way: those perfect years where nobody really knows what they are doing. Bates Motel and Sleepy Hollow were the best freshman shows on TV, despite the latter having absolute gibberish as its mission statement. Any period that can cough up another couple of those must be a fertile period indeed.

TV Eye
Back in Action