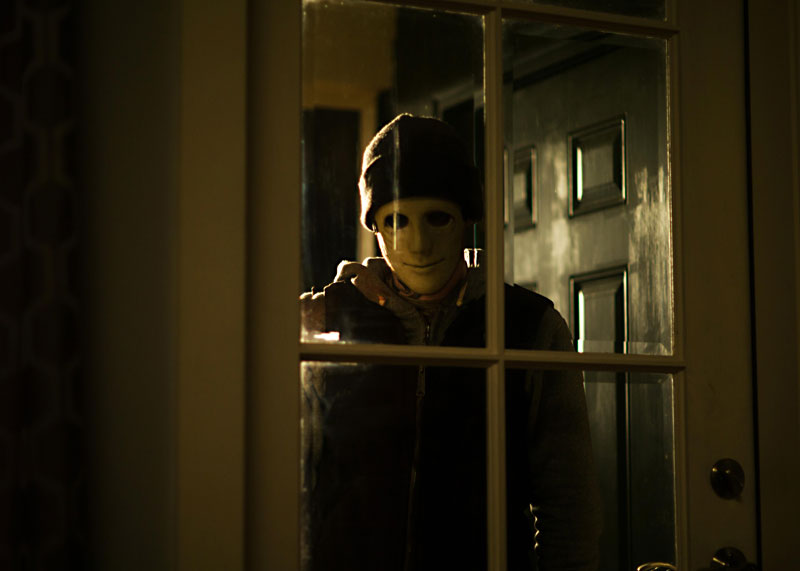 Inspiration is unpredictable. One night, Hush director Mike Flanagan and star Kate Siegel were dining, discussing nontraditional heroines, home invasion movies, and their shared love of 1967's Wait Until Dark, starring Audrey Hepburn as a blind woman besieged by thieves. Then Flanagan mentioned he wanted to make a dialogue-free film. Finally, Siegel said, "I was talking about a recurring fear that I have in the house of walking past a face in the window. From there, we started bouncing back and forth on who would be someone that could turn a fairly basic premise on its head?"

That conversation became sealed-room thriller Hush, which debuted at SXSW and reaches Netflix on April 8. Maddie (Siegel) is a successful author who lost her hearing as a child. One night, a masked stranger (John Gallagher Jr.) tries to break in, with malevolent intent. But without the simple cues of hearing his footsteps, or broken glass, will she even know he's there?

With this simple idea, Flanagan and Siegel headed to the Stanley Hotel (inspiration for Stephen King's The Shining) and booked the legendarily haunted room 217: Then, Siegel said, "We drank a ton of whiskey and finished the rest of this movie."

Flanagan called those days "the weirdest writing sessions that I'd ever been a part of. Normally when you're writing with a partner, you're bouncing dialogue off each other, you're performing scenes that way. For us, we'd come in the room and we wouldn't come near the computer. I'd go outside and try to figure out how to get through the sliding glass door, and she'd be in the kitchen, trying to look for what weapons were available." The end result was a script that didn't look anything like a normal movie: Flanagan said, "It looked like a chunk of stage direction."

That doesn't mean that the film is silent. Instead, the audience is left to concentrate on the audio cues that Maddie cannot hear. Flanagan said, "The boom operator was constantly coming around for the mic coming across the counter, or this particular footfall, or the way a door closes. They had to be catching as much of the ambient sound as possible." When there is finally an audible conversation, Flanagan said, "That was jarring for everyone on the set, to hear the spoken word again. Our boom operator was suddenly like, 'Oh, right, me.'"

And just because there was very little spoken conversation, that didn't mean there was no dialogue. Siegel had to go through a crash course in American Sign Language, which she called "a really beautiful way to communicate [and] a full, physical form of expression."

Using sign language changed how the film was shot. Flanagan said, "Typically, there are moments in there that you would go and cover in close-up, which would mean you couldn't see her hands. So the DP and I, when we went to attack that scene, it occurred to us that we were going to be in medium [shots], which is not typically how you want to cover your leading lady."

That change was driven by Siegel's ASL coach, who explained that concentrating on Maddie's hands wasn't enough. Siegel said, "She was talking about how the sign, the actual sign, like 'no', that's barely the surface of how you would communicate. It's not just 'no,' it's what kind of 'no'? And then you have to shake your head, and you normally mouth, 'nooo,' or 'nah,' or 'no!' That kind of full body communication is expected, and the facial expressions get big. It's like dancing and talking."

After a Fashion
From a new Hush and some new grooves to a big voice on The Voice, Your Style Avatar covers the sounds