How collaboration got Richard Linklater's baseball comedy Everybody Wants Some!! off the bench 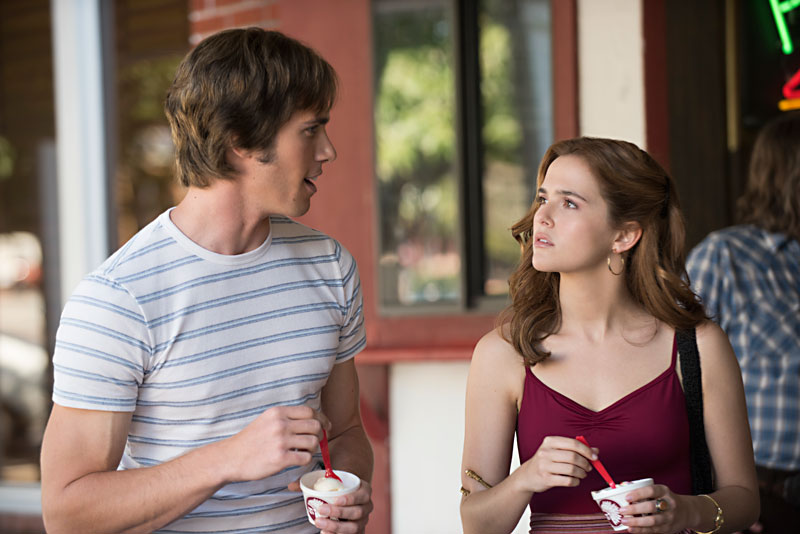 Blake Jenner and Zoey Deutch in Everybody Wants Some!! (Courtesy of Paramount Pictures)

There's no "I" in team: That's the wisdom at the heart of Richard Linklater's latest feature Everybody Wants Some!!. Loosely based on his own experiences as a college baseball player, its depiction of the three days before classes begin in the fall of 1980 shows a band of individuals coming together as a cohesive unit. The same could be said about the team behind the camera and, as writer/director, Linklater could be described as its coach.

Producer Ginger Sledge knows all about being on Linklater's team. In terms of credits, this is only their third collaboration, starting with 1996's SubUrbia and followed in 2011 by Bernie. However, she's actually known him since 1991's Slacker and, as is the way of the film industry, the pair have worked on a variety of projects. Some have been derailed, like Karl Rove bio College Republicans; others are in the long, slow process of development, such as organ transplant comedy Larry's Kidney; and on others, like 1995's Before Sunrise, she was involved in the very earliest parts of production. As for Everybody Wants Some!!, she'd been involved off and on with the project since before Bernie. In that time, it's evolved: Seven years ago, it was called That's What I'm Talking About, then two years ago, it almost became a TV show. She said, "I have many different computer files of this movie from the last several years."

Throughout that process, Linklater remained dedicated to the story and, like a good coach, he worked everyone around to his way of thinking. Sledge said, "As collaborative as he is – and he is very collaborative – he always knows where he's going to end up, he always knows what his vision is. He may seem to some like he's feeling his way through, but I think he always sees it in his mind. He'll listen to what you have to say, and he'll give his counters, or he'll say, 'Yeah, that's great,' and he will change a couple of little things here and there, but I think, in the end, overall, he really knows what he's going to end up with."

While Sledge has been a quiet regular in Linklater's dugout, in contrast it's hard not to think of Linklater and longtime editor Sandra Adair as synonymous. After 23 years and 17 projects, Adair said, "I'm part of Rick's team; I've been part of Rick's team for a long time. I think he depends on me, and somehow I'm delivering."

When Linklater told her he was finally moving ahead with Everybody Wants Some!!, he never had to tell her what mood to strike in the edit. She said, "I know his process and his way of working and his footage so well that we never really had that creative conversation in the beginning. I think we're at a point where he trusts that I'm going to get the dailies and know what he intended, and he knows that, if I'm floundering, he'll eventually know about it and we'll work it out together." What really drives Adair's work is the performances, but again she attributes that to Linklater. She said, "Rick is a genius at pulling the performances out and allowing the actors to fulfill the roles." 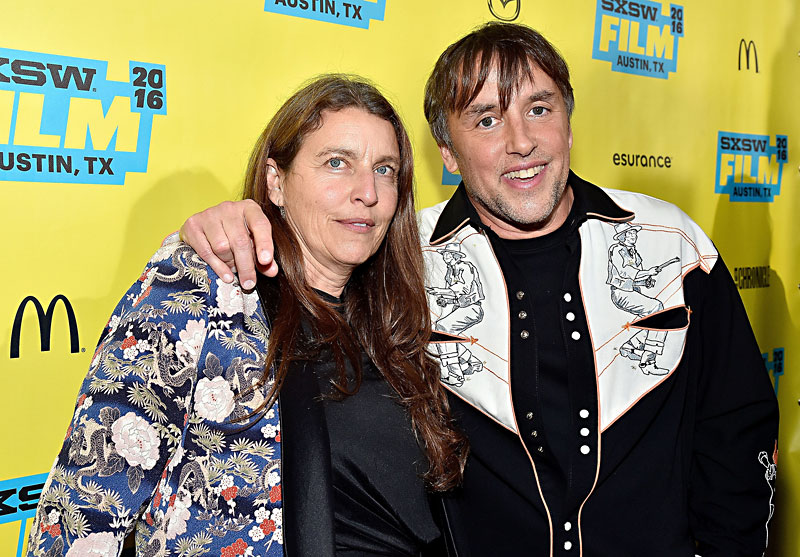 Ginger Sledge and Richard Linklater at the SXSW premiere of Everybody Wants Some!! on March 11, 2016. (Courtesy of Paramount Pictures)

As with much of Linklater's career – starting with his debut, Slacker, and reaching its zenith in this film's spiritual predecessor, Dazed and Confused – Everybody Wants Some!! splits its focus across a massive ensemble. That's why Sledge described the casting process as her favorite part of working with Linklater. "We tried to cast a group of guys that we thought would gel together."

One of the first roles cast was Blake Jenner as Jake, the freshman pitcher and the character closest to Linklater's own experiences. Jenner admits he had one strike against him for the part: While he came from a sporting family, and he'd wrestled while growing up in Miami, Fla., "I didn't have a baseball bone in my body," he said. "We had to put together audition tapes to show our athleticism with baseball, and mine was so terrible I had to go to the batting cages a few times just to make contact with the ball."

Before shooting began, the most important team-building exercise was the two and a half weeks spent at Linklater's Bastrop home, serving as the bunkhouse for the cast that became the Southeast Texas University Cherokees. Those days saw intense character workshopping, with Linklater reworking the script as the actors gave the student athletes life. Jenner called that time "the biggest gift he could have given us. I don't think the camaraderie on the screen would read as well if we didn't have that time to get to know each other, mess with each other, crack some jokes and pull some pranks, rehearse, and drink a shit-ton of Lone Star."

This wasn't just horseplay, but a chance for Coach Linklater to make sure everyone knew their position. Jenner said, "One time I was testing my freedom and really messing with these guys, and he would tell me, 'You've got to have that fine line between standing up for yourself and being a man, and being a freshman and honoring these guys as seniors and trying to work your way into theirs.'"

It wasn't just the onscreen team bonding in Bastrop. It was where Zoey Deutch found the essence of Beverly, the theatre arts freshman who's treading water just as frantically as Jake. She said, "Like a lot of Rick's fans, I presumed that his films were improv-based, and that's what I took into my audition. I played around a lot, I didn't use any of the words that were in the written scenes, and did whatever. Unbeknownst to me, there is pretty much no improv."

Beverly is the interloper among the jocks, who treat every woman in their path as something to conquer. "They're boobs or ass, that's it," she said. "No face." If the Bastrop days were simply a frat excursion, then Deutch could have been the outsider there too, but it was in that collaborative creative space that Beverly became fleshed out. Calling the workshopping "intense and beautiful," Deutch said, "She changed and grew and moved with the ebbs and flows of conversations with Rick and I, and rehearsals with Blake, Rick, and I. By the time you shoot, those words in your sides that you're looking over in the makeup trailer are verbatim what you're saying, because after working them and working them, those are your words."

Everybody Wants Some!! opens in theatres Friday, April 1. See Film Listings for showtimes and review. For an interview with Linklater, Ethan Hawke, and Chronicle editor Louis Black, see "Everybody Has Some," March 11.

READ MORE
More Everybody Wants Some